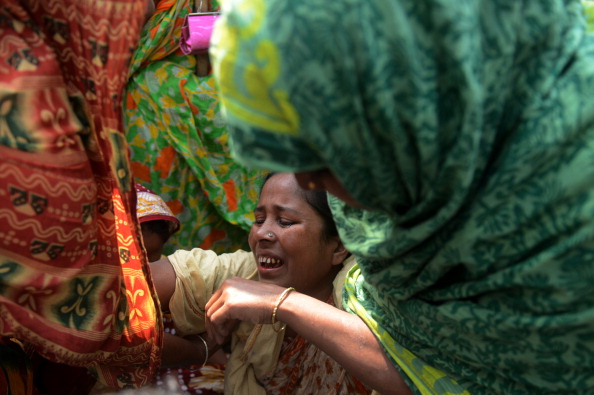 Survivors and relatives of Bangladeshi garment workers killed in the Tazreen Fashions fire and Rana Plaza building collapse at a protest in Dhaka on November 24, 2013.

DHAKA - Survivors and families of victims of Bangladesh&39;s worst industrial disaster that killed more than 1,100 people last year began receiving compensation Friday, a senior union official said.
British fashion clothing retailer Primark sent payments of $640 to survivors and victims&39; families, Roy Ramesh, a union leader who also belongs to a group coordinating compensation, told AFP.
Primark was one of more than two dozen Western retailers which had clothing made at the Rana Plaza complex housing five factories that collapsed on Dhaka&39;s outskirts in April last year, killing 1,135 workers and injuring over 1,500.
"Around 430 employees of Primark&39;s supplier have got the money today. Some 130 workers were left out because of some technical problem, but they will get the instalment soon," Ramesh said.
Other brands which had clothes being made at the factory complex are providing compensation through an ILO-backed trust fund.
The workers employed by those brands will receive the same amount of compensation on April 15 from the trust fund, which is seeking to raise $40-million from leading Western retailers to fully compensate the victims, Ramesh said.
Primark&39;s payments to survivors and the families of those who died were being supervised by the trust fund.
This instalment of 50,000 taka is being paid as an advance payment on the victims&39; total compensation claims, Ramesh said.
Further compensation will be paid on the basis of injuries sustained by workers and in the case of those who died on the basis of their age and wage-earning potential, officials said.
The tragedy highlighted appalling safety conditions in the world&39;s second-largest garment industry.
Since the disaster, nearly 200 Western retailers from Europe and America have formed two umbrella groups to launch safety inspections of the impoverished country&39;s 3,500 garment factories, but retailers have been criticised for failing to swiftly compensate the victims.
Earlier this month, local and international labour and rights groups urged the 27 brands linked to the doomed Rana Plaza factories to contribute to the ILO-backed fund before the first anniversary of the tragedy on April 24.
Unions and injured workers have staged almost daily protests at the rubble-strewn ruins of the complex since the tragedy, demanding compensation for victims.
Primark has also paid nine months of salary to help families of the dead and those who survived the accident meet expenses while the Canadian group Loblaw has paid three months of wages, officials said.
Primark could not be reached immediately for comment on Friday&39;s payment. But it said earlier this month on its website that it will pay $9-million to families of dead and injured workers who worked for its supplier New Wave Bottoms, one of the five factories based at the Plaza.
The payments "will be met in full, in cash", it said, adding that it was paying a total of $12-million including the salaries to injured workers and dead victims&39; families and plans to contribute another $1-million to the Trust Fund.