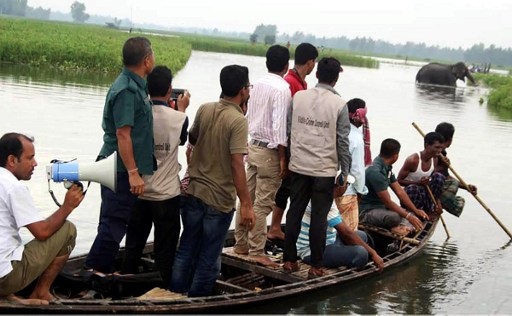 Bangladesh wildlife officials look on from a boat as they observe a wild elephant in a watercourse at Sarishabari in Jamalpur District, north of Dhaka on 1 August 2016.

DHAKA - Bangladesh and India are mounting a major rescue effort for a wild elephant struggling to survive after it was separated from its herd by floods and then washed across the border.

On Thursday three Indian forest officials will travel to a flood-hit area in northern Bangladesh to investigate how to help the stranded animal, which was separated from its herd in northeast India more than a month ago.

A vet dispatched to the scene by Bangladesh authorities said the elephant, a female that weighs an estimated four tons, was "weak and tired" after its solo odyssey across the Brahmaputra river that separates the two countries.

"For the last month it has been separated from its herd and stranded mostly in flood water," Sayed Hossain told AFP.

"It crossed the mighty Brahmaputra and has been living mostly on paddy (rice) crop, sugar canes and a limited amount of banana plants."

Forestry official Shahab Uddin said thousands of villagers in boats have been following the elephant, which has so far crossed about 100km of flooded terrain in northern Bangladesh.

Bangladeshi authorities have dispatched a team of forest rangers, police inspectors and vets to track the wild animal, but the floods were hampering rescue efforts.

"Our effort to rescue the animal has been hampered by ongoing floods as there is no way we can tranquillise it in water as it might be floated downstream. The elephant must be driven to a higher ground in a bid to rescue it," Uddin said.

READ: Herd of elephants help their baby that collapsed in the road

"After seeing her latest conditions, both teams will decide how we can rescue her," he added.

Uddin said the hundreds of villagers who were flocking to see the elephant were also likely hampering her ability to seek higher ground unaffected by the floods.

The wild elephants of India and Bangladesh have dwindled in number in recent decades as their habitat is destroyed.

The rescue bid comes days after Indian wildlife officers appealed for help in caring for eight rhino calves pulled from the floodwaters in the northeastern state of Assam.

Over 300 animals killed in Assam floods in Kaziranga https://t.co/ipcXRl15qV pic.twitter.com/EkfpcrgoYa

Scores of people die every year from flooding and landslides during the monsoon rains in India and neighbouring Nepal and Bangladesh.

So far this year 96 people have died in the worst-hit Indian states of Assam and Bihar.