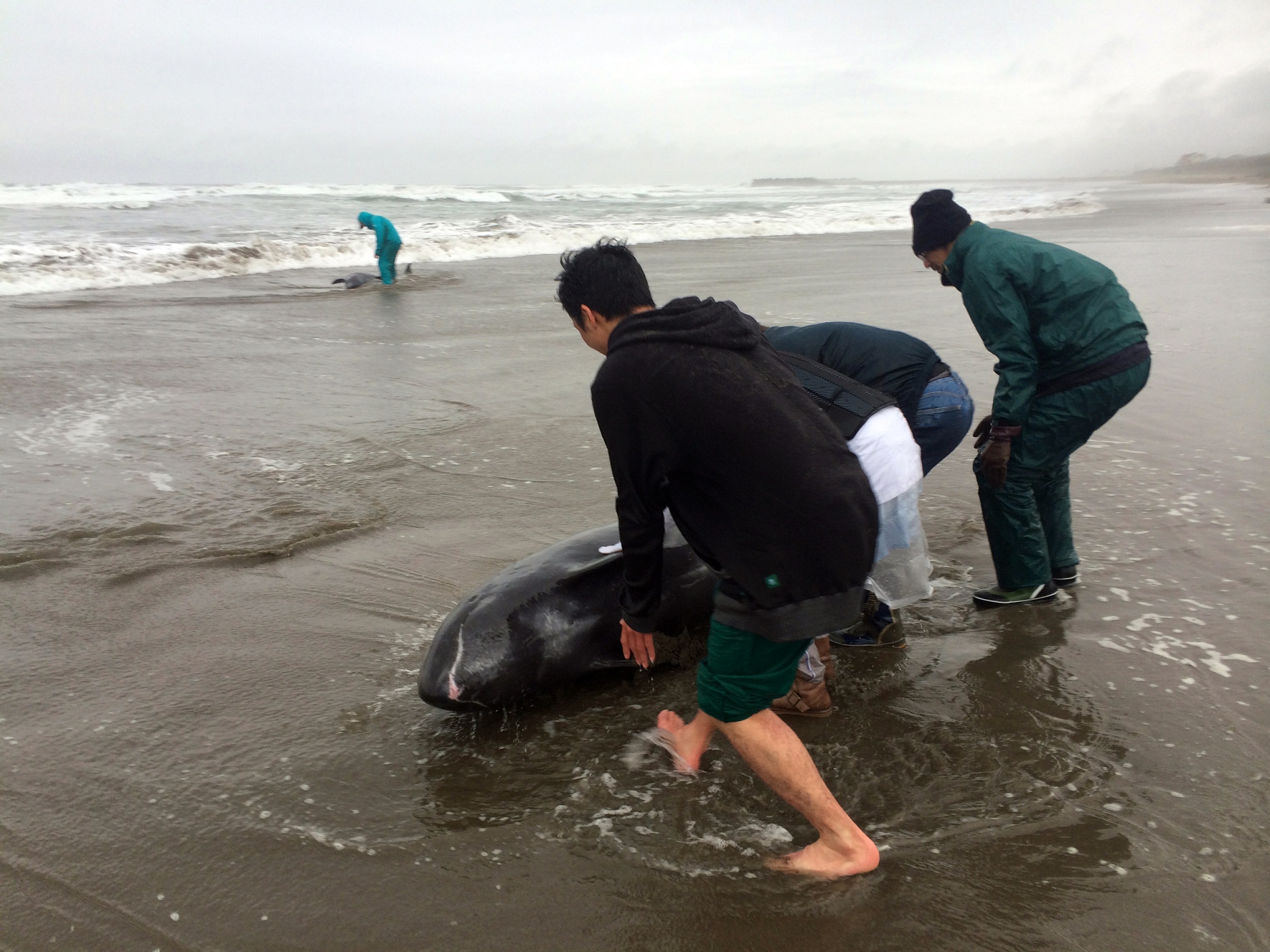 Locals try to push back a stranded dolphin into the sea off Hokota city. About 150 dolphins became stranded on a beach in Hokota city.

TOKYO - Japanese officials were burying several more dolphins on Monday as researchers tried to work out why scores of the animals beached themselves last week.

Eight melon-headed whales, a species of dolphin, were found washed up along the coast at Hokota, around 100 kilometres (60 miles) from Tokyo.

A city official said the dolphins were probably part of the original herd that rescuers had taken back out to sea.

"Unfortunately they are all dead, so we will bury the bodies this afternoon," the official told AFP.

Locals in Hokota reported finding dozens of melon-headed whales on a 10-kilometre stretch of beach on Friday morning.

Throughout the day, volunteers and coastguard officials worked to try to save them, pouring seawater over them and carrying some back into the ocean.

Cetacean specialists were carrying post mortem examinations on some of the dolphins in an effort to find out why they had got stuck on the sand. The species usually lives in deep water.

One theory scientists were testing was that the creatures could have had a parasitic infection that disrupted their ability to navigate. Another was that the dolphins&39; sonar had become ineffective in the sandy shoals.

Suggestions abounding on social media that the mass-beaching was a harbinger of a powerful earthquake were dismissed as "unscientific".

Net users had pointed out that several dozen melon-headed whales had beached themselves six days before a huge 9.0 magnitude earthquake in 2011 that sparked a catastrophic tsunami.

There was also a mass stranding on a remote New Zealand beach on February 20 that year, two days before a large quake struck Christchurch.

Once stranded, the animals are vulnerable to dehydration and sunburn until rescuers can use the high tide to move their massive weight back into deeper water.

Efforts to save the dolphins stood in marked contrast to the global view of Japan and its relationship with cetaceans.

Despite international opprobrium, Japan hunts minke and pilot whales off its coast, and has for many years also pursued the mammals in the Antarctic Ocean, where it takes advantage of a scientific exemption to an international moratorium on whaling.

It has never made a secret of the fact that meat from the animals is consumed.

A United Nations court ruled last year that the Antarctic hunt was a commercial venture masquerading as research, prompting Tokyo to suspend operations, but it vowed to redesign the programme to make it more scientific.

The International Whaling Committee (IWC) is due later Monday to give its response to the redesigned plan.