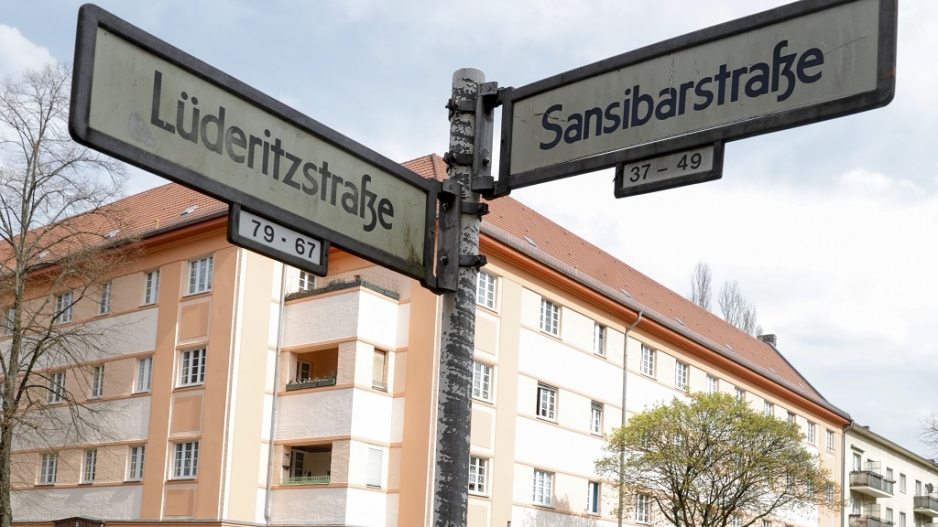 Two of the streets names that will be changed in the so-called African Quarter of Berlin because they refer to Germany's bloody colonial period in Namibia.

BERLIN - Berlin is poised to strip the names of streets linked to atrocities committed during its occupation of Namibia and dedicate them to liberation fighters, part of a late reckoning with Germany&39;s brutal colonial history in Africa.

After more than a decade of debate, the three biggest parties in the Berlin Mitte district assembly voted on Wednesday night to recommend new names for streets in the so-called African Quarter in the northwest of the German capital, spokeswoman Melita Ersek said.

"The final decision by the district councillor could take another month or so -- the date is likely to be announced at another hearing next Thursday," Ersek told AFP.

"But it is quite common that the parties&39; recommendation is adopted."

The motion to drop the names associated with Germany&39;s bloody 1884-1919 occupation of what was then called German South West Africa marks a long-delayed victory for local activists.

The African Quarter in the multiethnic, working-class neighbourhood of Wedding has streets and squares named for the founder of German South West Africa, Adolf Luederitz, as well as Gustav Nachtigal, its imperial commissioner, and the founder of German East Africa in today&39;s Tanzania, Carl Peters.

Wedding, for its part, was named for 12th-century nobleman Rudolf de Weddinge.

"The African Quarter still glorifies colonialism and its crimes," council members from the Greens, Social Democrats and Linke parties said in their joint motion.

"That conflicts with our understanding of democracy and does lasting harm to the image of the city of Berlin."

Following a redesign based on traffic flows, the sites are now to be called Maji Maji Boulevard, Anna Mungunda Boulevard, Cornelius Frederiks Street and Bell Square.

Maji Maji was a battle cry used in the freedom struggle that gave its name to the biggest African uprising against the Germans.

Anna Mungunda was the first Herero woman to take a leading role in the independence movement. Cornelius Frederiks led the Nama people&39;s resistance.

And Rudolf Douala Manga Bell was a Duala king in today&39;s Cameroon, who, with his wife Emily, resisted land grabs by white colonisers.

Compared with European countries such as Britain and France, Germany had a relatively short if extremely violent period as a colonial power in Africa.

The German occupiers of Namibia killed tens of thousands of indigenous Herero and Nama people in 1904-1908 massacres, which historians have called the first genocide of the 20th century.

Germany has acknowledged that atrocities occurred at the hands of its colonial authorities, but it has repeatedly refused to pay direct reparations, citing millions of euros in development aid to the Namibian government.

Although the streets&39; renaming looked set for approval, the daily Tagesspiegel reported that it could still run into resistance from residents and business owners complaining about the cost of address changes.

That argument has won backing in Berlin from the conservative Christian Democratic Union, Chancellor Angela Merkel&39;s party, while the far-right AfD has opposed the initiative outright.

The district assembly agreed in principle to changing the names in 2016 and appointed a jury to come up with suggestions, which included South African anti-apartheid activist and singer Miriam Makeba and Kenyan Nobel Peace Prize winner Wangari Maathai.

After a lengthy and sometimes heated debate on various candidates&39; merits, the parties settled on the final list.

The African Quarter got its name on the eve of World War I when entrepreneur Carl Hagenbeck planned a park there to display animals and human beings from Africa.

The plans were never realised due to Hagenbeck&39;s premature death but not before several streets were renamed in tribute to Germany&39;s colonial adventures.

The landscape of the German capital has seen repeated renaming of streets and squares as the imperial era gave way to the Nazi period, then the city&39;s Cold War division by the Berlin Wall and finally reunification.