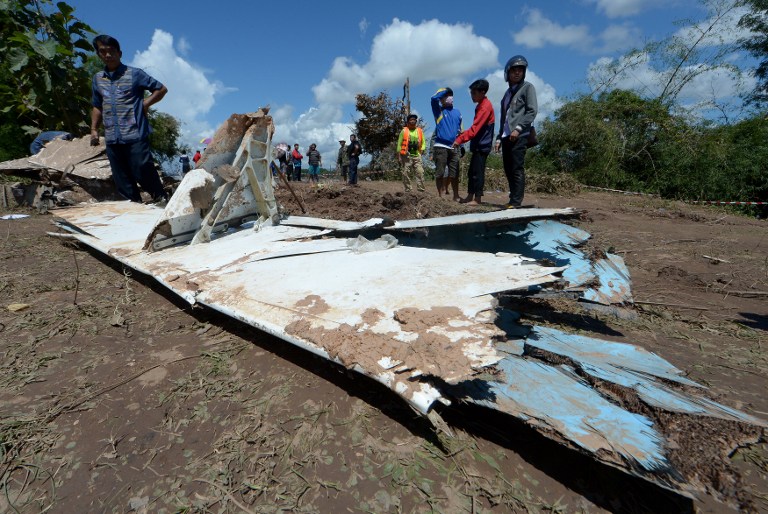 Lao villagers look at part of a wing from the Lao Airlines plane crash two days before, along the bank of the Mekong river in Pakse town on October 18, 2013.

VIENTIANE - Investigators have detected signals from the flight data recorders of a Lao Airlines plane which plunged into the Mekong River killing all 49 people on board, officials said Monday.

The airline said the bodies of 43 of the victims had been recovered from the swollen river in Laos, some many kilometres downstream from the crash site.

The French-Italian made turboprop ATR-72 went down in stormy weather last Wednesday near Pakse airport in Champasak province, sinking to the bottom of the river.

More than half of the passengers and crew were foreigners from some 10 countries, including seven from France.

Experts from the French aviation safety agency BEA said they had detected the aircraft&39;s two "black boxes", which may hold crucial evidence as to the cause of the crash.

But efforts to reach them were hampered by poor visibility and strong river currents.

"The Mekong has very powerful currents. The water is muddy. You can&39;t see anything," BEA director Jean-Paul Troadec told AFP.

Once they are found, any data from the boxes will have to be carefully extracted and analysed, he said, adding that it was important not to prejudge the cause of the accident.

Laos authorities earlier said divers had been forced to use ropes to guide them through the murky waters and only parts of the submerged plane have been found.

"It&39;s difficult for divers to go down because the water is not clear. It&39;s fast-flowing and about 12-13 metres (40-43 feet) deep," Yakua Lopankao, director general of the country&39;s department of civil aviation, told AFP.

The airline said two more bodies had been retrieved on Monday about 25 kilometres (15 miles) from the crash site.

According to an official passenger list, there were 16 Laotians on board, seven French travellers, six Australians, five Thais, three South Koreans, two Vietnamese, and one national each from the United States, Canada, Malaysia, China and Taiwan.

There were also five crew, including the Cambodian captain.

Impoverished Laos, a one-party communist state, observed a nationwide minute&39;s silence on Monday afternoon to remember the victims of the crash, which is the nation&39;s worst known air disaster.

Previously the country&39;s worst air disaster was in 1954 when 47 people died in an Air Vietnam crash near Pakse.