'Bookkeeper of Auschwitz' sentenced to four years in prison 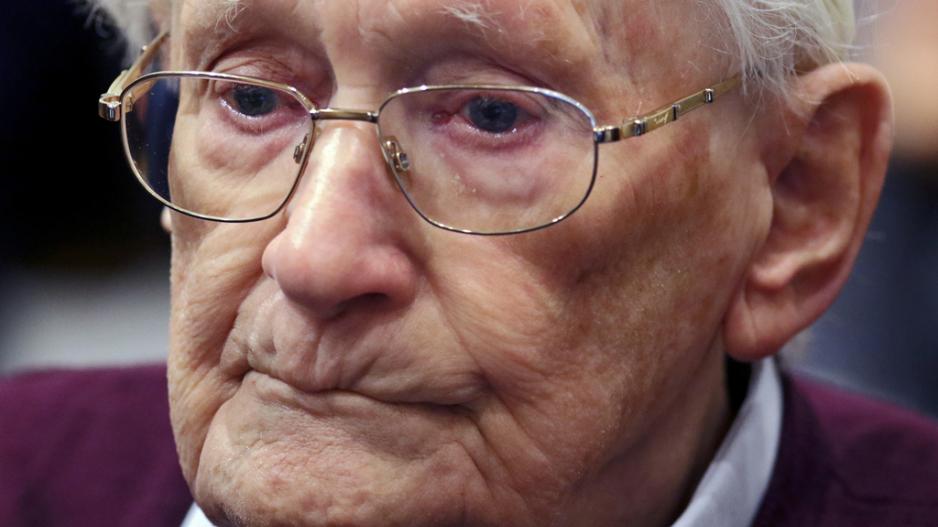 Defendant Oskar Groening awaits the proclamation of his verdict at the court house in Luenenburg, Germany, 15 July 2015. The 94-year-old ex-Waffen-SS member was sentenced to four years prison for accessory of murder in 300,000 cases at a Nazi death camp.

GERMANY - A German court Wednesday sentenced a former Nazi SS officer known as the "Bookkeeper of Auschwitz" to four years in jail, in what was expected to be one of the last Holocaust trials.

Oskar Groening, 94, sat impassively in the packed courtroom as judge Franz Kompisch said "the defendant is found guilty of accessory to murder in 300,000 legally connected cases" of Jews sent to the gas chambers from May to July 1944.

He said Groening had willingly taken a "safe desk job" in "a machinery designed entirely for the killing of humans", a system that by any standard was "inhumane and all but unbearable for the human psyche".

Groening served as an accountant at the death camp in Nazi-occupied Poland, sorting and counting the money taken from those killed or used as slave labour, and shipping it back to his Nazi superiors in Berlin.

He also on several occasions performed "ramp duty", processing deportees as they arrived in cattle cars at the extermination and forced labour camp.

The sentence was longer than the three and a half years prosecutors had demanded in the high-profile case heard in the northern city of Lueneburg since April.

Groening had on Tuesday seized a last opportunity to address the judges and said he was "very sorry" for his time stationed at the concentration camp.

"No one should have taken part in Auschwitz," he said, his voice wavering.

"I know that. I sincerely regret not having lived up to this realisation earlier and more consistently. I am very sorry."

Holocaust survivors and victims&39; relatives who were co-plaintiffs welcomed the verdict, calling it a "very late step toward justice".

"SS members such as Groening who took part in the murder of our families have created lifelong and unbearable suffering for us," they said.

"Neither the criminal proceedings nor the words of the accused can alleviate this suffering. But it gives us satisfaction that now the perpetrators cannot evade prosecution as long as they live."

Some 1.1 million people, most of them European Jews, perished between 1940 and 1945 in the Auschwitz-Birkenau camp before it was liberated by Soviet forces.

Prosecutors had demanded jail for Groening based on the "nearly incomprehensible number of victims", but mitigated by "the limited contribution of the accused", who testified he had never personally harmed a prisoner.

The defence team had called for an acquittal and asked the judges to take into account Groening&39;s deteriorating health but also his willingness to testify in detail about his time in Auschwitz, which many defendants in similar cases had refused to do.

Groening has acknowledged "moral guilt" but said it is up to the court to rule on his legal culpability seven decades after the Holocaust.

He had testified twice that he was so horrified by the crimes he witnessed at the camp after his arrival in 1942 that he appealed three times to his superiors for a transfer to the front, which was not granted until autumn 1944.

The court heard harrowing testimony by more than a dozen Holocaust survivors who were also co-plaintiffs in the case.

While some of the elderly witnesses expressed disappointment that Groening failed to formally apologise to them, others have spoken of a kind of catharsis from having their day in court.

"We were able to bear witness about the monstrous and unspeakable crime committed against us and our families," the survivors and victims&39; relatives said in their statement.

Groening had previously been cleared by German authorities after lengthy criminal probes dating back to the 1970s.

But the legal foundation for prosecuting ex-Nazis changed in 2011 with the German trial of former death camp guard John Demjanjuk.

While previously courts had punished defendants for individual atrocities, Demjanjuk was convicted solely on the basis of having worked at the Sobibor camp in occupied Poland.

The head of the federal office investigating Nazi-era crimes, Kurt Schrimm, told the Bild newspaper this month that other probes of former concentration camp guards were still ongoing, although "many had to be terminated because the accused had died or were no longer capable of standing trial".