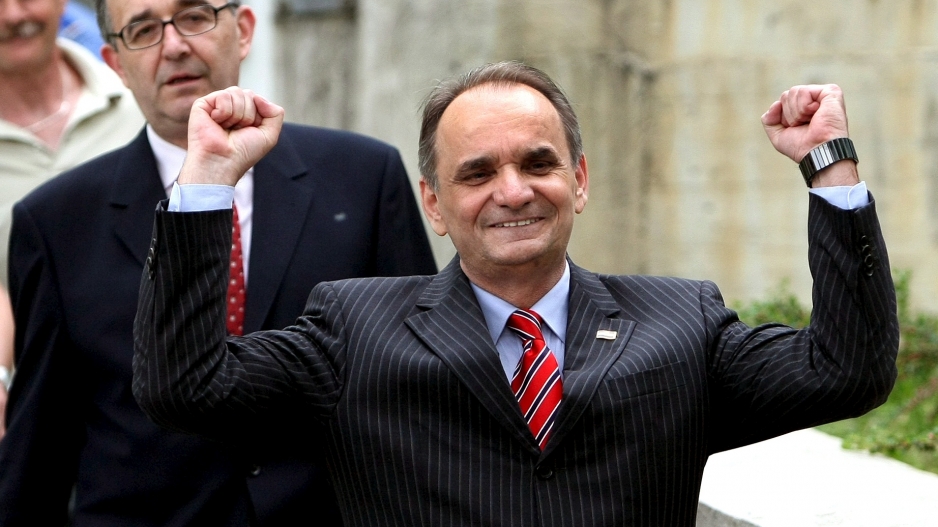 Croatian politician and former general Branimir Glavas jubilates after being released from detention, Sarajevo, Bosnia and Herzegovina, on 15 May 2009. A Bosnian court released Glavas who had fled to the country after being handed a 10-year sentence.

Branimir Glavas was released from jail in the southern Bosnian town of Mostar, where he was serving an eight-year sentence for the killing of at least 10 Serb civilians at the start of the 1990s war in Croatia, FENA news agency reported.

The case was sent back to the Supreme Court for a new trial.

Glavas was first sentenced to 10 years in prison by a Zagreb court in 2009, but a year later the Supreme Court reduced the term.

He was found guilty of ordering the 1991 abduction, torture and murder of at least 10 Serbs in the eastern town of Osijek, where he was defence chief at the start of Croatia&39;s 1991-1995 war.

He was the highest ranking Croatian official convicted by local judiciary for war crimes.

After being sentenced in 2009 Glavas -- a former general who later became a founder and leading force in the rightist Croatian Democratic Union party -- immediately fled to neighbouring Bosnia, where he holds citizenship.

But in September 2010, just a month after moves in parliament to strip him of his seat, Bosnia arrested Glavas under an agreement between Sarajevo and Zagreb requiring the fugitive to serve his sentence in Bosnia if he refused to return to Croatia.

Croatia&39;s proclamation of independence from the former Yugoslavia in 1991 sparked a four-year war with Belgrade-backed rebel Serbs who opposed the move. The conflict claimed nearly 20,000 lives.

The proper handling of war crimes cases involving Croatian nationals was among key criteria for the country to join the European Union. Croatia became the bloc&39;s 28th member in 2013.