Brazil strikes recede, but now government has to pay 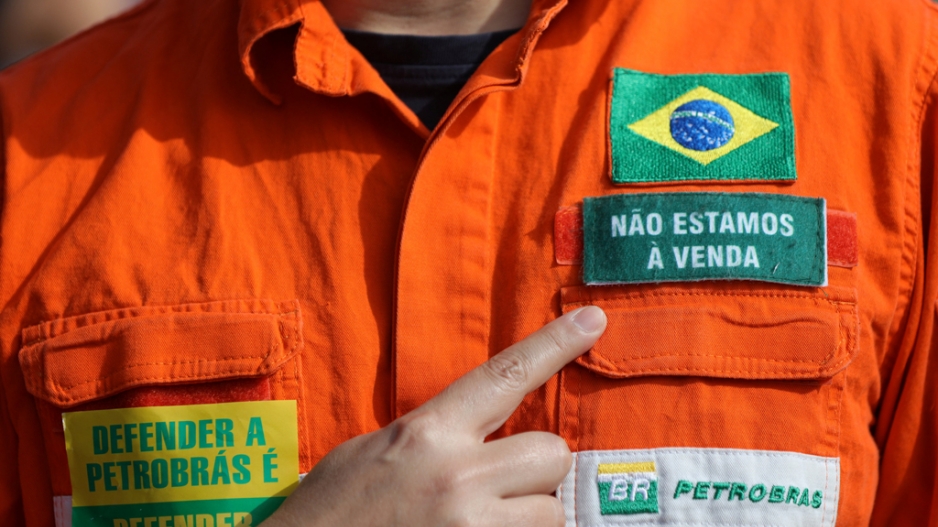 An oil worker points to a patch on his shirt that reads: "We are not for sale", near the entrance to Petrobras Alberto Pasqualini Refinery, in Canoas, Brazil May 30, 2018.

Given the court ruling, the FUP "recommends that unions suspend the strike," it said in a statement.

The strike, which started Wednesday, called for Petrobras CEO Pedro Parente to be removed and for an end to the company&39;s ability to set prices at free-market rates -- a policy that has seen steep increases this year.

The stoppage came on the heels of a devastating truckers&39; strike protesting the high fuel prices.

With truckers blocking highways and refusing to deliver cargo, entire cities were left without functioning gas stations for more than a week. Supermarkets ran out of fresh food and as many as a dozen airports were unable to refuel airplanes.

The oil workers&39; brief strike had a little concrete impact, in part because the truckers&39; action meant refineries had reserves full.

However, the FUP&39;s call will have been a relief for President Michel Temer&39;s deeply unpopular government, after it had to cave into the truckers&39; demand for cheaper fuel and see its already shaky authority crumble further.

Life in big cities like Sao Paulo and Rio de Janeiro was getting back to normal Thursday, with fruit gradually reappearing on shop shelves, gas stations reopening and buses running.

The federal highway police announced that for the first time since the strike started there were no more roadblocks.

But now Temer&39;s government must find a way to pay for the 9.6 billion reais ($2.6 billion) subsidies promised to alleviate the truckers&39; fuel costs.

Even with this, the threat of industrial unrest remains.

The discounted diesel promised to the truckers will only last for 60 days and no plan has been announced for how to avoid renewed conflict.

As for the oil workers&39; unions, they described the suspension of the three-day strike as "a temporary retreat" and a "warning," with an indefinite strike pencilled in for mid-June.

Temer is now caught between warding off an ever more hostile public and keeping the markets happy with his policy of austerity cuts and free-market reforms to the sluggish economy.

The Petrobras pricing autonomy, granted in late 2016, was billed as an important measure to develop the huge company.

Under pressure, Temer suggested this week he might reconsider the policy. He then backtracked on Wednesday, with a government statement reassuring investors that "we will maintain the pricing policy."

With general elections in October and Temer&39;s allies facing an onslaught from more radical right-wing and lef-twing opponents, the future looks grim for a president who only came to power because his leftist predecessor Dilma Rousseff was impeached in 2016.

"If this truck drivers’ strike showed us one thing, it&39;s that the Temer government is over, and this administration can now only wait out the remainder of its term," said Marco Antonio Teixeira, a political analyst at the Getulio Vargas Foundation.

Although the truckers&39; strike caused serious disruption to millions of people, a Datafolha poll found that 87 percent of Brazilians supported the action.