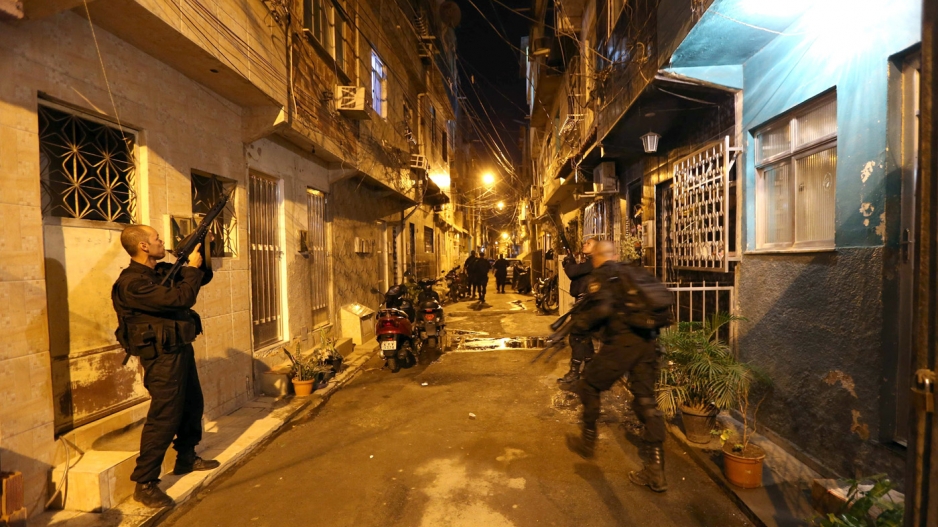 File: Brazilian policemen advance during a raid on the Mare favela, in Rio de Janeiro, Brazil. A boy's shooting death by police was recorded on a cellphone.

RIO DE JANEIRO – A 15-year-old Brazilian shot dead by police last week was carrying a mobile phone that caught the incident on camera, according to video published on Thursday by a news site.

Alan de Souza Lima was killed on Friday in a favela near Rio by police gunfire as he was hanging out with friends, including one who was shot in the chest but survived.

The chilling video, published on news outlet G1 Globo, shows the three teens playing around before the sound of gunfire is heard.

The phone continues recording as Lima falls to the ground and pained noises can be heard in the background.

Before the shots a voice asked the children why they were running and one of the boys answers "we were having fun, sir".

Police had previously said that the young men were caught in the crossfire as police targeted drug traffickers.

Officials said an investigation has been launched following the video&39;s release, and that several officers were taken off duty.

Lima&39;s friend who survived a bullet to the chest, Chauan Jambre Cezario, disputed the version of events earlier given by police and said his friends were targeted.

He provided the footage from Lima&39;s phone.

The killing sparked angry protests on Saturday, with demonstrators setting a bus and a truck aflame.

Brazil&39;s favelas have seen waves of violence in recent months as the country prepares to host the Olympics in August next year.

In January, 25 people were hit by stray bullets, including three fatally.