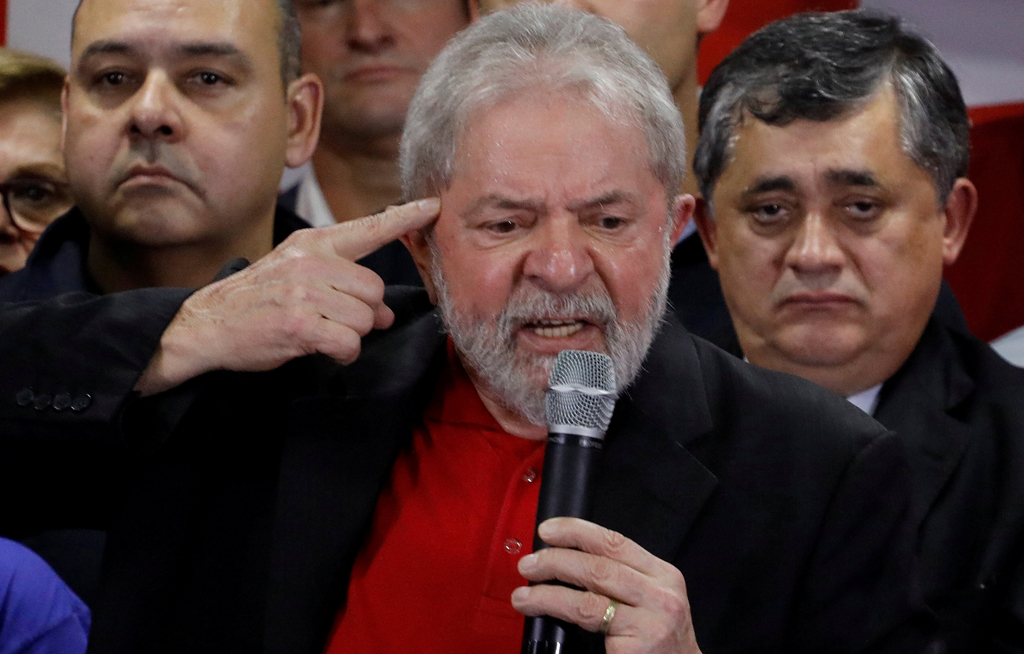 Despite having been convicted of corruption and facing a potential jail term, Lula is far ahead in a large field, with 36 percent of the latest opinion poll.

Bolsonaro, a congressional deputy with a love of provocative anti-gay, pro-dictatorship outbursts, is firmly in second place with 18 percent.

On Saturday, one of the country&39;s most established centrist forces, the Brazilian Social Democratic Party, or PSDB, took the first step in trying to become the missing piece of the political puzzle.

The PSDB convention overwhelmingly elected Sao Paulo state Governor Geraldo Alckmin as its leader - voting 470 to three - effectively launching him as the party&39;s candidate for the October 2018 polls.

Faced by that hostile voter landscape, the PSDB&39;s other big step expected soon is to quit the coalition government headed by the centre-right PMDB and scandal-ridden President Michel Temer.

A few PSDB ministers have already resigned from the government, though Foreign Minister Aloysio Nunes indicated on Saturday that he had no immediate plan to follow them. Still, the party is in an awkward spot.

Temer, who took over after the impeachment of leftist president Dilma Rousseff in 2016, is mired in corruption charges and is widely disliked for his attempt to push through austerity reforms. With single-digit ratings, he is the most unpopular president on record.

But will breaking from the government and naming Alckmin persuade voters that the PSDB can bring a fresh start?

"The need for a centrist candidate who contrasts with the extreme left and right will promote alliances between several parties and Alckmin will be a key player," he said. "This scenario is made for a PSDB victory."

READ: Brazil environmentalist Marina Silva to run for president in 2018

But while Alckmin, 65, has the party machine behind him, he may be seen as more of the same at a time when Brazilians are thirsting for something different.

So far he is polling only at a modest seven percent, behind ecologist Marina Silva.

Crucially, Alckmin is alleged to have taken dirty money in the sprawling "Car Wash" scandal that has uncovered systemic embezzlement and bribery between politicians and some of Brazil&39;s biggest companies. This is not a good time to be a graft-tainted politician in Brazil.

"He has a chance, but not much of one. No PSDB candidate is doing well in the polls and their party was hit hard by the corruption scandals," said Fernando Lattman-Weltman, an analyst at the Instituto de Ciencias Sociales.

The PSDB was the big winner in municipal elections held in 2016, but building on that in the presidential and congressional elections of 2018 will depend on the tepid economic recovery currently underway strengthening.

If that happens, the centrists will be able to argue that Brazil doesn&39;t need any radical shift left or right. But if the recovery peters out, voter anger may leave the PSDB out in the cold.

"If the economic recovery fails, then the whole political movement (that replaced leftist Rousseff) will fail," Betinho said.