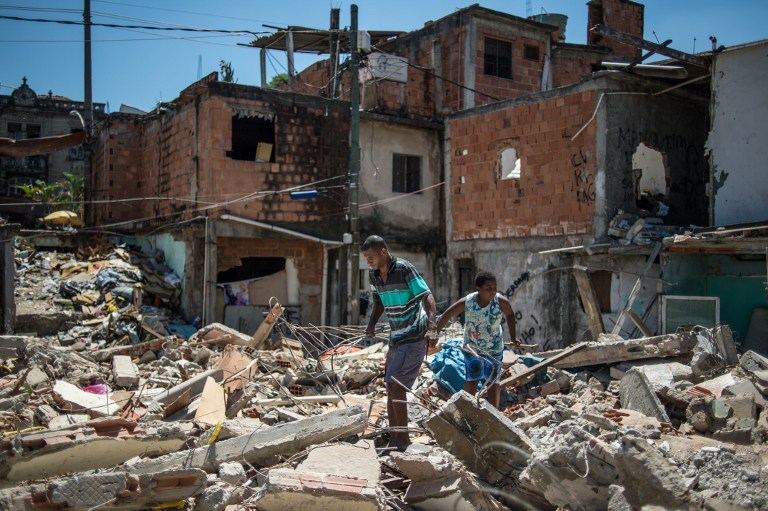 Nilvaldo Franca (L) looks for materials to sell with his nephew, at a demolished area including his home, at Metro favela (shantytown) near Maracana Stadium in Rio de Janeiro.

RIO DE JANEIRO - Amid piles of rubble which look like the result of a bombardment, random items stick out incongruously - an old armchair, a doll, a child&39;s trainer.

These ruins were only recently home to families living within a stone&39;s throw of Rio &39;s mythical Maracana stadium.

But their protests at demolition fell on deaf ears as city authorities doggedly renovate the district before the World Cup circus pitches camp in June.

"I was asleep when these guys from the town hall knocked on my door and took me away by force - I didn&39;t even have time to pick up my identity papers," 33-year-old Weber Garcez told AFP on Wednesday.

Garcez lives in the Favela do Metro slum area just near the Maracana, the temple of Brazilian football which will host the World Cup final on July 13.

"When I got here last night all my belongings were under the rubble left by the town hall bulldozers," said 43-year-old taxi driver Uthant Viana.

Tuesday morning&39;s demolition has infuriated local people, who reacted by blocking access to traffic along the Radial Oeste thoroughfare which runs parallel to the Maracana.

The stadium has itself undergone a renovation - and an expensive one too at more than 450 million dollars. Tuesday evening, the protesters again blocked off the avenue and set fire to barricades.

Lawyer and activist Eloisa Samy, who is offering legal advice to those who have been turfed out of their homes, including a number of children, told AFP no less than 637 families living in the area were forced out of their homes in 2010 and rehoused by the city authorities in nearby blocks of flats.

However, as some 40 houses which remain pending demolition have been left empty they have attracted squatters and today some 15 families live there - despite the town hall saying all that remains of the site will be pulled down at the end of January.

Local councillor Andre Santos says that "all the squatters will be able to find shelter" with local authorities help.

"The mayor came two months ago and promised us a house. I just want a place to sleep with my daughter," says Renata Lopes, a 26-year-old missing all her front teeth.

Several of the houses still standing have been plastered with posters showing mayor Eduardo Paes and the slogan "we are looking."

"These people have precious little as it is, and we have wrecked everything and taken everything from them. I want to bring that to the attention of the public authorities. Mayor Eduardo Paes should come here and negotiate," says Samy.

Brushed under the carpet

"It&39;s property speculation - they want to build a shopping mall here. The Brazilian people, the poor, have to make sacrifices so everything can be spick and span for the World Cup -- the dirt is swept under the carpet," says Samy.

After making a phone call, Samy reveals some good news - the deputy secretary of state for housing has entrusted her with drawing up a report into the situation of each remaining family.

Valeria da Silva, a 38-year-old mother of eight children aged between four and 20, was previously housed with her children by the town hall.

The youngest two of her brood cling to her as she says she does not know where she will end up.

In June, Brazil was shaken as a million people took to the streets across the giant country to demand better public services and protest at the multi-billion cost of staging the World Cup - and the Rio Olympics in 2016.

Indians and squatters had been camping out in the building for several months protesting at plans to turn it into a mall and Cabral pulled the plug on the development, which is now to be preserved and turned into a cultural centre.