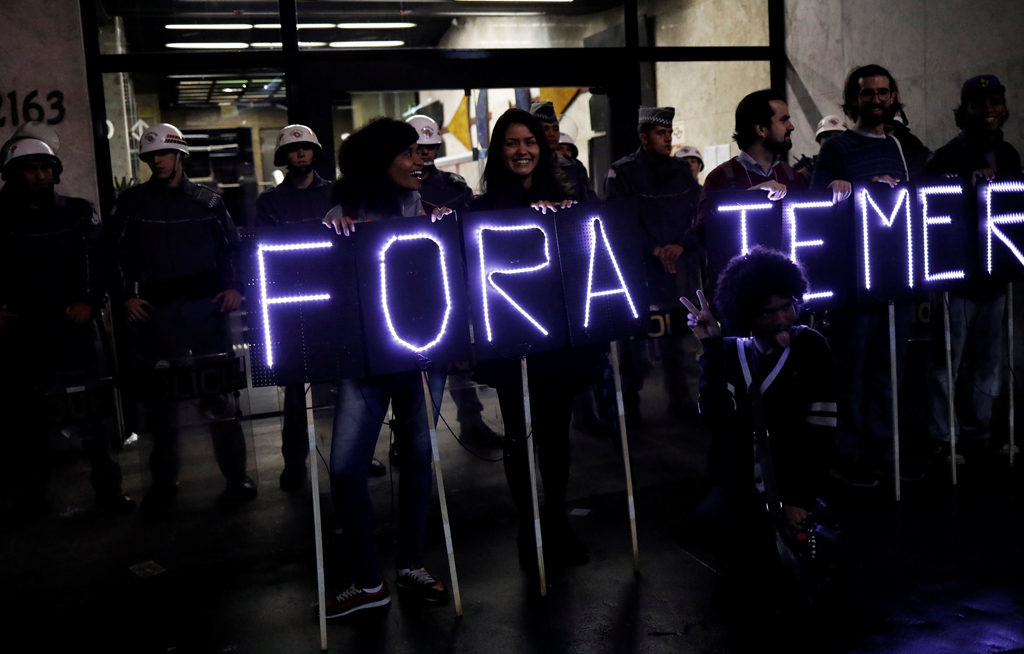 BRASILIA - Brazil's Michel Temer was to address the nation Saturday in his latest attempt to survive bombshell allegations of obstruction of justice.

A spokesman announced that the center-right president would speak later in what would be only his second public reaction since Wednesday's revelation of an audio recording in which Temer allegedly approved paying hush money to a jailed politician.

Temer has so far rejected mounting calls for his resignation and is scrambling to keep together his governing alliance to avoid the possibility of impeachment.

Although hugely unpopular with ordinary Brazilians, Temer has enjoyed a solid majority in Congress through his PMDB party, the PSDB social democrats and a string of smaller parties.

So far, major allies appear to be sitting on the fence. However, the small PSB party, which has one minister in the government, decided Saturday to pull out.

"At the top of our list is the immediate resignation of the president," Julio Delagado, a PSB deputy, told journalists.

In another ominous sign for Temer, the powerful Globo media group has turned fully against him with an editorial Friday declaring he "has lost the moral, ethical, political and administrative conditions to continue governing Brazil."

A further indicator of the temperature among Brazil's elite was expected later Saturday when the Association of Brazilian Lawyers holds a meeting to decide whether or not to support impeachment.

There was some good news for Temer, however.

Sao Paulo Mayor Joao Doria, a rising star of the PSDB party who is seen by many as a strong candidate for president in 2018 elections, told Folha newspaper he opposes causing instability.

In comments interpreted as being strongly supportive of Temer staying in office, he said that "in a situation like this, good sense, balance, calm are fundamental."

Doria said Temer's push for austerity reforms aimed at whipping Brazil's floundering economy into shape are the priority. "The reforms have to survive," he said.

In his sole public pronouncement so far, Temer refused to resign, saying that the fate of the austerity reforms -- unpopular with many ordinary Brazilians -- was at stake.

His economy minister Henrique Meirelles, seen as a key figure in the government, has been quoted by Brazilian newspapers this week as saying that he has no plans of quitting.

On Sunday, nationwide protests are planned by leftist groups and turnout will be closely watched as a gauge of the public mood.

The "Car Wash" investigation has upended Brazil with scores of politicians indicted or subject to probes into alleged bribe-taking and embezzlement.

The court had already released a secretly recorded conversation between Temer and a business executive in which the president is purportedly heard giving his blessing to monthly payments of hush money to former lower house speaker Eduardo Cunha.

Cunha is in prison after a "Car Wash" judge convicted him of bribe-taking and as a powerful insider, he has long been rumoured to be threatening to spill secrets on other politicians.

Temer says the recording has been wrongly interpreted, and on Saturday the newspaper Folha reported that an expert analysis of the tape that it had commissioned found "more than 50 edits" of the recording.

Temer's crisis comes barely a year after he took over in controversial circumstances after the impeachment of leftist president Dilma Rousseff for illegally manipulating the government's accounts.

He was her vice president in an uneasy coalition between his PMDB and her Workers' Party, and took over automatically to serve out the rest of her term through 2018. Since then, Temer has radically changed the country's previously leftist path, bringing in market-friendly reforms.

With the Supreme Court has authorised a probe against Temer and Congress under pressure to launch impeachment proceedings, there are various scenarios that could see him being forced from office.

Under the constitution, Temer would be replaced in an indirect election held by Congress until after the scheduled 2018 elections.

However, there is a widespread demand among Brazilians for advancing the 2018 polls and holding an immediate popular election. This would require Congress to approve a constitutional change.

The latest to demand snap elections was former leftist president Luiz Inacio Lula da Silva on Saturday. "We want Temer to leave but we don't want an indirectly elected president," he told supporters in Sao Paulo.

Lula currently leads in polls ahead of the 2018 election but he faces five separate corruption trials and if convicted would be barred from seeking office.