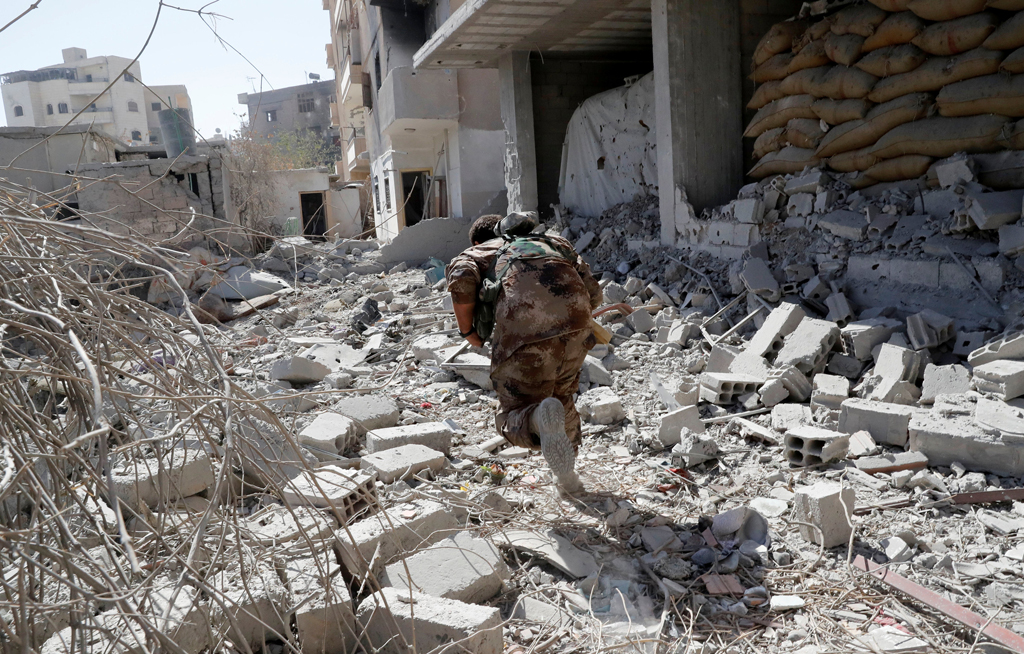 A member of Syrian Democratic Forces runs for cover from the sniper fire of the Islamic State militants near the stadium in Raqqa, Syria, October 4, 2017.

LONDON - Britain on Friday rejected a Russian bid to attach conditions to the extension of a UN-led panel tasked with identifying who is behind chemical attacks in Syria&39;s six-year war.

Russia has circulated a draft Security Council resolution that calls for a six-month extension of the panel, known as the Joint Investigative Mechanism (JIM). Its mandate expires on November 16.

The United States has put forward a rival text seeking two more years for the JIM following the release of its latest report blaming the Syrian government for a sarin gas attack.

Moscow&39;s text proposed that the council shelve that report on the use of the nerve agent on the opposition-held village of Khan Sheikhun to allow for a new investigation.

"Russia is trying to shoot the messenger to cover up for the crimes of its abhorrent ally."

Britain called on the council to renew the JIM&39;s "existing mandate, which has already delivered rigorous and conclusive findings."

Russia has questioned the work of the panel because the experts did not go to Khan Sheikhun and worked from samples Moscow maintains may have been tampered with by Western intelligence.

The Russian-drafted measure "requests the JIM to retain its findings... until such time when full-scale and high-quality investigation on the site of an incident becomes possible."

The US draft resolution expresses "grave concern" over the findings on the sarin attack and said the experts should "undertake their respective investigations in a manner that they deem appropriate to fulfill their mandate."

More than 80 people, including young children, died in the April 4 attack that provoked global outrage and prompted the United States to fire cruise missiles at a Syrian air base.

The Security Council will discuss the report on Tuesday.