Bromance as Trump and Modi hail friendship at first talks 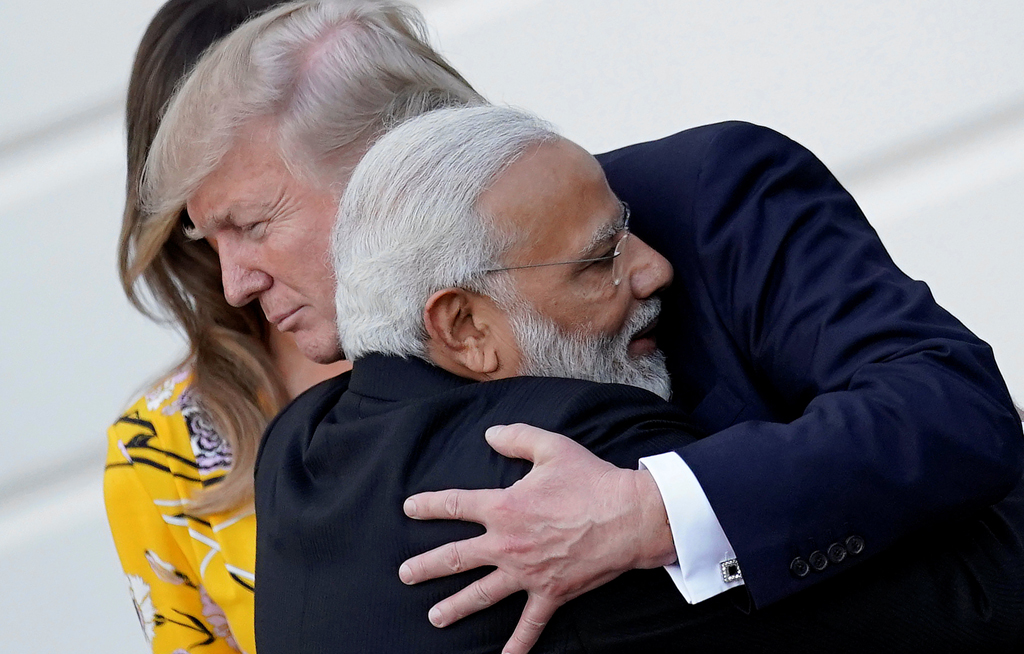 India's Prime Minister Narendra Modi hugs US President Donald Trump as he departures the White House after a visit, in Washington, US.

WASHINGTON - US President Donald Trump and Indian Prime Minister Narendra Modi embraced each other as friends and partners Monday, pledging their quest for economic growth would strengthen rather than undermine ties between the world's two largest democracies.

While Trump's relations with some traditional allies have got off to a rocky start, he and Modi appeared to strike up an immediate rapport in their first meeting, with the pair exchanging hugs in the White House Rose Garden in front of reporters.

Any differences over issues such as immigration and climate change were kept behind closed doors and they instead vowed to work more closely on issues such as combatting terrorism, the war in Afghanistan and defence cooperation.

While there were no announcements of major deals, Trump's administration confirmed it had given the green light to the $366 million sales of a transport carrier to India while the purchase of around 20 drones by India's military was also approved.

"I would say the relationship between India and the United States has never been stronger, has never been better," Trump told a beaming Modi as they made statements.

"I look forward to working with you, Mr Prime Minister, to create jobs in our countries, to grow our economies and to create a trading relationship that is fair and reciprocal," he said.

After Trump said it was "important that barriers be removed to the export of US goods into your markets and that we reduce our trade deficit with your country", Modi said that his country was becoming an easier place for American companies to do business.

RT if this is how you feel about President Trump---- PM Modi hugs @POTUS pic.twitter.com/7MM0mA9IPe

"We consider the United States as our primary partner in India's socio-economic transformation in all our flagship programs and schemes," said the Indian leader.

"I'm sure that convergence between my vision for a new India and President Trump's vision for 'Making America Great Again' will add a new dimension to our cooperation," added Modi in reference to Trump's signature campaign slogan.

"I am very clear about the fact that India's interests lie in a strong, prosperous, and successful America."

Commentators had predicted that Trump and Modi would find much in common, with both men having won power by portraying themselves as establishment outsiders.

Both men are prolific users of social media, something Trump joked about with his guest.

Modi, in turn, made Trump beam by hailing his reputation as deal maker from his time as property tycoon.

"I'm sure that under your leadership our mutually beneficial strategic partnership will gain new strength ... and that your vast and successful experience in the business world will lend an aggressive and bold agenda to our relations."

While ties with some traditional allies have been strained by Trump's complaints that Washington has been the loser in trade agreements, Modi appears alert to his host's sensitivities and emphasis on transactional diplomacy.

India is currently the world's fastest growing major economy, a status that Modi is hoping to cement by drawing in more foreign investment -- in part by encouraging manufacturers to do business in Asia's third-largest economy.

Ahead of his talks with Trump, Modi met with Defence Secretary Jim Mattis and Secretary of State Rex Tillerson.

The State Department later announced that it was slapping sanctions on a senior figure in the Kashmiri separatist group Hizb-ul-Mujahideen.

In the Oval Office PM Modi and President Trump pic.twitter.com/ANR3l1OX5q

The designation of Syed Salahuddin (also known as Mohammed Yusuf Shah) as a global terrorist marks a diplomatic victory for India which has been battling a decades-long insurgency by separatist groups in Kashmir, a Himalayan region divided between India and Pakistan and claimed in full by both.

Relations between India and the US were generally cool until the 1990s but they warmed under Trump's predecessor Barack Obama, as India sought greater foreign investment and trade ties.

But it was not long after Trump's election that obstacles emerged on issues such as trade and visas for Indians wanting to work in the United States.

Then Trump accused India of seeking to profit from the Paris climate accord as he announced the US withdrawal from the deal this month -- drawing sharp denials from New Delhi.

A proposed overhaul of H-1B visas -- used by thousands of Indian software engineers to work in the United States -- has caused concern in New Delhi.

But Indian officials have played down those differences, insisting that Modi was sensitive to his counterpart's concerns over American jobs and trade.

Regional security did feature in the talks, including on Afghanistan as Washington considers deploying up to 5,000 extra troops to help local forces fighting insurgent groups.

After dinner, Pres & Mrs Trump escort PM Modi to his limousine to bid farewell with another hug. (Three by my count). pic.twitter.com/O7yqNVQ0zX

Trump said he wanted to "thank the Indian people" for their contribution to helping development in Afghanistan.

Modi in turn said India "would maintain close consultation and communication with the US" to achieve the joint goal of "peace and stability".