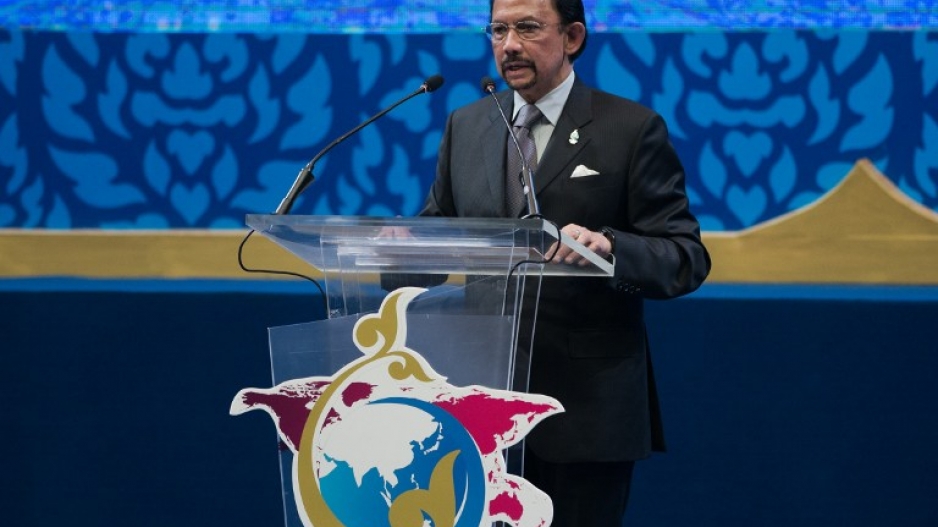 Brunei Sultan Hassanal Bolkiah delivers a speech at the 2nd Asia-Pacific water summit in Chiang Mai on May 20, 2013.

BANDAR SERI BEGAWAN, Brunei - Brunei has postponed its implementation of harsh Islamic punishments, due to begin Tuesday, that have earned condemnation from the United Nations and sparked rare criticism at home.

No confirmed new date was given for the start of the punishments -- which will eventually include flogging, the severing of limbs and death by stoning -- but an official told the Brunei Times they would begin "in the very near future".

The new criminal code brings in execution by stoning as the punishment for gay sex and adultery as well as rape.

It also introduces the death penalty for defamation of the Prophet Mohammed, blasphemy and declaring oneself a non-Muslim.

Brunei&39;s Sultan Hassanal is on a trip to Singapore, and it is thought that his government decided it could not introduce the new law without the Islamic monarch -- the driving force behind the move -- kicking it off.

Jauyah Zaini, assistant director of Brunei&39;s Islamic Legal Unit, was quoted by the Brunei Times as saying implementation had been delayed "due to unavoidable circumstances". He did not elaborate nor give a new date.

Authorities in the oil-rich sultanate said a sharia "declaration ceremony" would go ahead as planned on April 30 to launch the first phase of the new penal code.

Sultan Hassanal -- one of the world&39;s wealthiest men -- had announced in October that new sharia law punishments would be phased in.

The UN&39;s human rights office criticised the raft of harsh new measures this month, saying it was "deeply concerned" about the revised criminal code.

The move also sparked an outcry earlier this year on social media -- the only outlet for public criticism of authorities in Brunei, where questioning the 67-year-old sultan is taboo.

Non-Muslims have also expressed anxiety over mixed messages on whether the punishments would apply to them.

Situated on Borneo island, which it shares with Malaysia and Indonesia, Brunei practises a more conservative form of Islam than its Muslim-majority neighbours, banning the sale of alcohol and heavily restricting other religions.

The sultan has backed the strengthening of Islam in his country, setting up a "firewall" against what he calls potentially harmful outside influences.

Officials have previously said sharia cases would require an extremely high burden of proof and judges would have wide discretion applying it.

Brunei already has the death penalty, but has not carried out any executions since 1957.