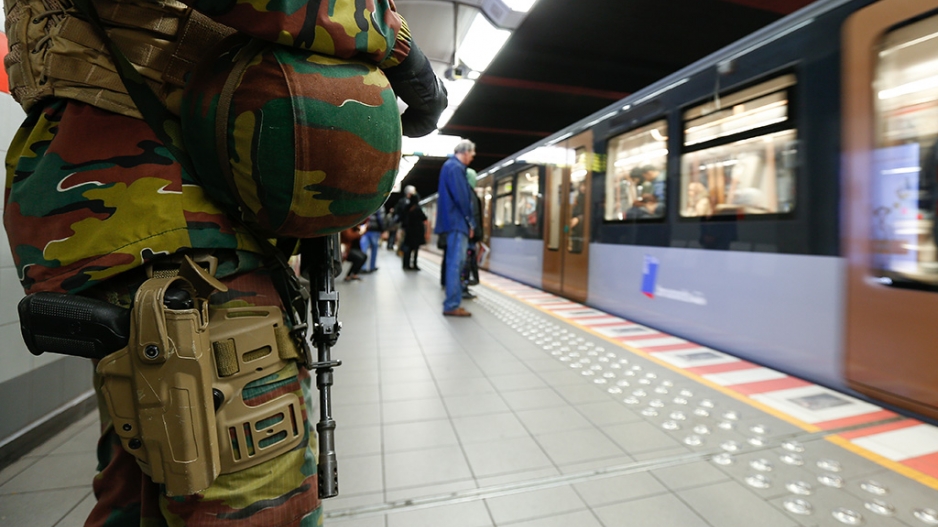 File: A Belgian soldier patrols the platform of a Brussels' metro station following the terror alert level being raised to 4/4 on 25 November 2015. On Tuesday 22 March 2016, an explosion went off at the Maelbeek Station near EU headquarters.

BRUSSELS - A second explosion has been heard at a Brussels, Belgium metro station near European Union institutions.

All stations have reportedly been closed.

Two explosions were heard at the Brussels airport shortly before the metro station blast.

PHOTO: A Google map showing the locations where a number of bombs went off on Tuesday morning.

Several people have reportedly been killed, and several others wounded following two explosions in the departure hall of Brussels airport on Tuesday, Belgian media said.

The blasts at the airport and metro station occurred four days after the arrest in Brussels of a suspected participant in November militant attacks in Paris that killed 130 people.

Surveillance video: The moment of the explosion at the airport of Brussels pic.twitter.com/YD3kSzZsQF

Belgian police had been on alert for any reprisal action. British Sky News television&39;s Alex Rossi, at the airport, said he heard two "very, very loud explosions". "I could feel the building move.

There was also dust and smoke as well...I went towards where the explosion came from and there were people coming out looking very dazed and shocked." "The thinking here is that it is some kind of terrorist attack - that hasn&39;t been verified by any of the authorities here at the airport."

Video showed devastation inside the departure hall with ceiling tiles and glass scattered across the floor. RTBF said the metro station hit by the explosion was close to European Union institutions. Authorities closed all metro stations in Brussels, but there were no details immediately available of any casualties in this second incident of the day.

A local journalist tweeted a photograph of a person lying covered in blood among smoke outside Maelbeek metro station, on the main Rue de la Loi avenue which connects central Brussels with the EU institutions.