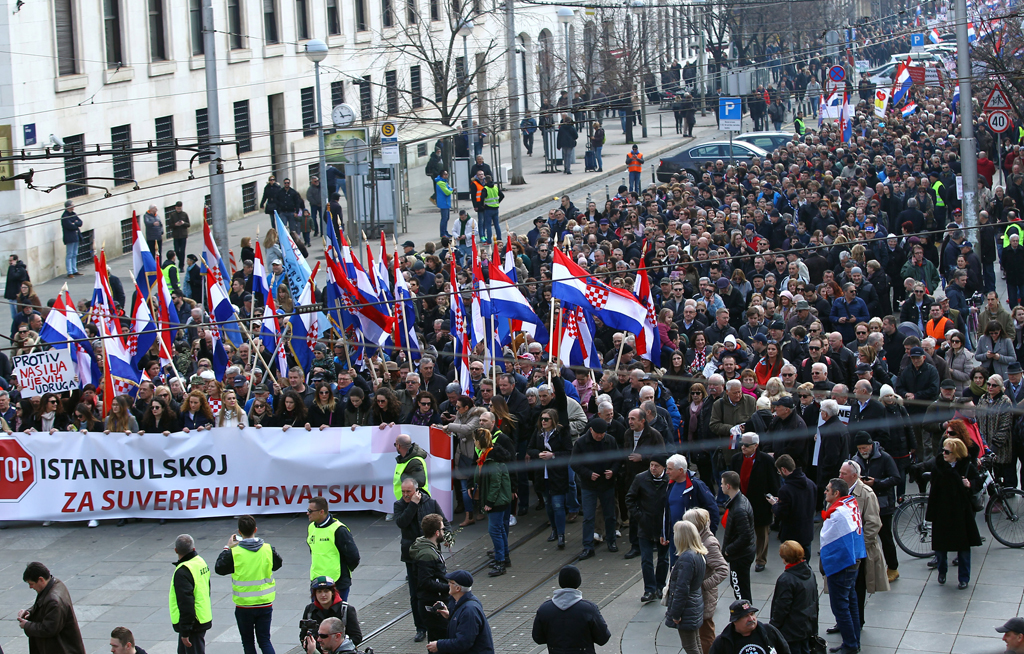 People walk during the protest against the ratification of the Istanbul Convention in Zagreb, Croatia, March 24, 2018.

SOFIA, Bulgaria – Bulgaria&39;s constitutional court said Friday that the notion of "gender" blurred lines between the two biological sexes and rejected it as unconstitutional.

"The definition of gender as a societal concept calls into question the limits between the two biologically determined sexes -- man and woman," the court&39;s ruling said.

The court was giving its opinion on the so-called Istanbul Convention -- the world&39;s first binding instrument to prevent and combat violence against women, from marital rape to female genital mutilation.

In January, Prime Minister Boyko Borisov&39;s conservative government asked parliament to ratify the convention but then abandoned the effort following an outcry over parts of the text, especially over how to translate the term "gender" into Bulgarian.

In its decision on Friday, the constitutional court rejected the convention, backing opposition against it by Borisov&39;s own coalition partners, as well as by Bulgaria&39;s Orthodox Church and its Muslim minority.

"If society no longer differentiates between man and woman, the fight against violence against women becomes impossible to accomplish," the court said in its 8-4 decision.

The nationalist VMRO, one of the parties in Borisov&39;s alliance, welcomed the ruling as a "victory", saying that the convention would have introduced "the unacceptable notion of gender into kindergartens and schools" and would have legitimised transsexualism.

The VMRO has also said the convention&39;s text would open the way to same-sex marriage. Public opinion in the Balkan country is deeply divided over the issue.

The Istanbul Convention has so far been ratified by 32 countries, all members of the Council of Europe, to which Bulgaria also belongs.