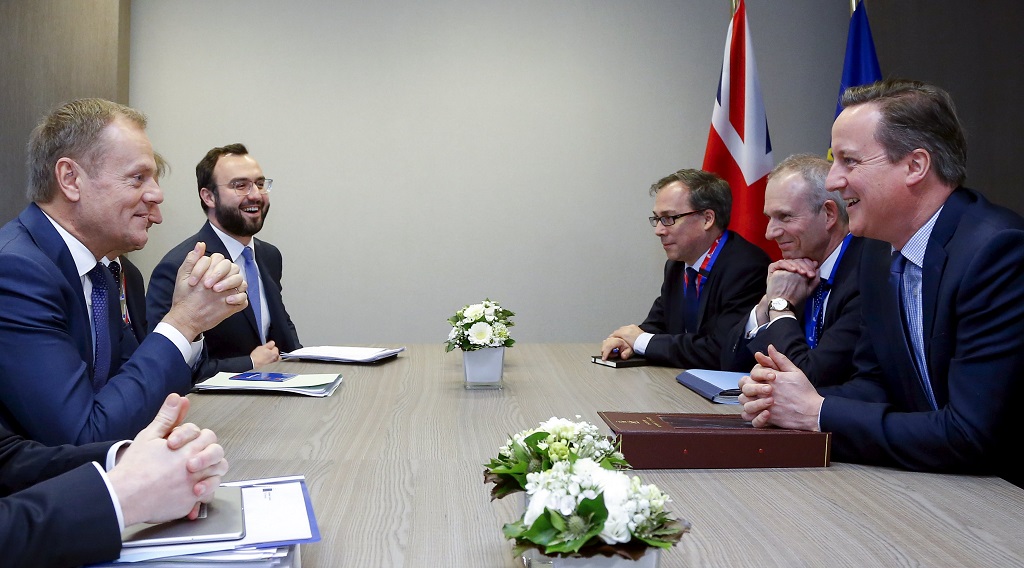 BRUSSELS - British Prime Minister David Cameron said on Thursday hard work and good will should help him clinch a deal at a European Union summit, described by leaders of the 28-nation bloc as the best chance of preventing Britain leaving.

Ahead of &39;now or never&39; talks, the latest draft agreement sent to EU leaders overnight and seen by Reuters offered several ways of overcoming differences on the most contentious areas of Cameron&39;s renegotiation - migration curbs and financial safeguards - but much was still open for debate.

Cameron is keen to end the week in Brussels with a deal that he can call a victory so he can then start campaigning to keep Britain in the EU before a referendum widely expected to be held in late June.

"We&39;ve got some important work to do today and tomorrow, and it&39;s going to be hard. I&39;ll be battling for Britain. If we can get a good deal, I&39;ll take that deal, but I will not take a deal that doesn&39;t meet what we need," Cameron said as he arrived at the two-day summit.

"I think it&39;s much more important to get this right than to do anything in a rush, but with good will, with hard work, we can get a better deal for Britain," he told reporters before talks with European Council President Donald Tusk.

Other EU leaders also voiced optimism that a deal could be reached, with European Commission President Jean-Claude Juncker describing himself as "quite confident".

"We have to sort out a certain number of questions ... and I&39;m convinced that Britain will be a constructive and active member of the European Union," Juncker said.

Underlying the optimism was a widespread feeling that if leaders fail to agree terms this time, they will lose the opportunity to wind up the British renegotiation and turn to more pressing concerns, such as the refugee crisis.

"The mood around town is that people think that if we don&39;t get it solved now, we&39;re never going to solve it," said a senior EU diplomat.

Cameron, struggling to sell a deal to an increasingly sceptical British public and many in his own Conservative Party, has spent weeks touring Europe seeking agreement on his reforms, so he can hold a referendum and try to put to rest the divisions over Europe that have dogged his party for years.

He wants change in four areas: measures to curb migration, safeguards to protect London&39;s financial sector from decisions binding the 19 EU members using the euro, for Britain to be excluded from "ever closer union", and for greater competition in the bloc.

EU officials have said some leaders are still concerned that Cameron&39;s demands will encourage other countries to ask for changes to their membership agreements. But the new draft signalled that, especially on migration, any solution would be tailor-made to take note of Britain&39;s specific welfare system.

There will be debate over the wording of the safeguards for London&39;s financial sector - which France fears could give Britain an advantage - on any commitment to future amendments of the EU&39;s founding treaties, and on how long Cameron can curb welfare payments.

East European nations initially balked at Cameron&39;s plans to restrict payments to low-paid EU workers, saying this discriminated against their citizens. But Slovak Prime Minister Robert Fico suggested a readiness to compromise on the issue.

With the prospect of late-night talks on Thursday, summit chairman Tusk has scheduled an "English breakfast" on Friday in the hope of a final compromise.

The stakes are high. A vote to leave would not only transform Britain&39;s future in world affairs but would also shake the EU, which has struggled to maintain unity over migration and financial crises, by ripping away its second-largest economy and one of its two main military powers.

The uncertainty over when Britain will vote and what a British exit, or Brexit, might look like has subdued markets and forced many businesses to spend millions of dollars to try to craft a plan B. Several are studying the costs of moving headquarters and of staffing problems involving EU nationals.

The British public is split over whether to remain in the European Union, but with opinion polls showing the &39;out&39; campaign gaining ground, Cameron wants to hold the referendum as soon as possible.

But he faces a battle to convince voters. Even before any deal was announced, the head of one of Britain&39;s &39;out&39; campaigns wrote off his demands as "inconsequential".

"David Cameron is in Brussels for a row about a trivial set of demands none of which will return control back to Britain," Matthew Elliott said. "Despite all the bluster, the arguments today will be inconsequential."