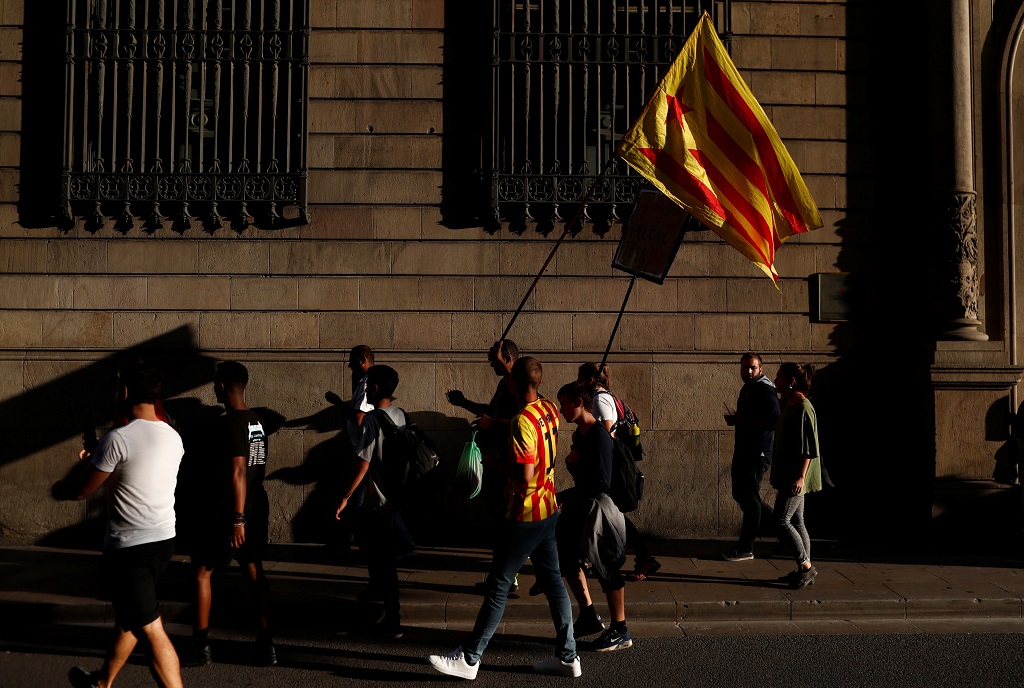 BARCELONA - Catalonia&39;s secessionist leader held back Thursday from calling a snap regional election to ease tensions as Madrid moved to seize control of the region.

Carles Puigdemont said he had considered calling polls to stave off the central government&39;s takeover bid, but received "no guarantees" to make this possible.

It was now up to the Catalan regional parliament, due to meet in the evening, to decide how best to deal with Madrid&39;s looming power seizure, he said.

The central government is poised to implement the drastic measures to halt Catalan leaders&39; drive to break away from Spain.

Many fear Thursday&39;s parliament session would be yet another opportunity for separatist lawmakers to force an independence declaration.

"I was willing to call these elections... it was my duty to try and avoid the impact on our institutions" of Madrid taking over the region&39;s government, police, purse, and public broadcaster, Puigdemont said.

But he said he received "no guarantees" from the central government.

The biggest political crisis in Spain in decades was sparked by Catalan authorities holding an independence referendum on 1 October. The vote was deemed illegal by the central government and the courts.

In the hours before Puigdemont&39;s highly-anticipated announcement, there was feverish speculation that he would dissolve parliament and announce elections in a bid to keep Madrid at arm&39;s length.

Two of his MPs said they were resigning in protest.

Others had feared Puigdemont would unilaterally declare Catalonia an independent republic. He did neither.

Spain&39;s Deputy Prime Minister Soraya Saenz de Santamaria replied to Puigdemont&39;s announcement by saying the government was ready to move to a new phase "where the law is respected".

Regional authorities say 90 percent voted to break away from Spain. But only about 43 percent of eligible voters -- some 2.3 million -- turned out, with many anti-secessionists staying away while others were prevented from voting by police at polling stations.

After the contested, and deeply divisive plebiscite, Puigdemont declared Catalan independence, but immediately suspended the move.

The central government, in response, turned to Article 155 of the constitution, a never-before-used provision designed to rein in rebel regions.

A Senate committee is scheduled to gather in Madrid later Thursday to work on a blueprint for temporarily taking over the region.

Catalonia is one of 17 regions, with varying degrees of autonomy, that makeup Spain.

Polls show the region of 7.5 million people, fiercely protective of their distinctive language, culture and autonomy, is deeply divided on independence.

The semi-autonomous region accounts for 16 percent of Spain&39;s population and 20 percent of its economic output.

Spain&39;s Economy Minister Luis de Guindos acknowledged Thursday there could be "resistance" to officials who might be sent from Madrid to administer Catalonia in the event of a takeover under Article 155.

"I hope that (Catalan) civil servants who are highly professional... will be conscious that any act against Catalan society will be negative," de Guindos warned on Spanish radio.

He added there had been "a drop in consumption and paralysis of investments" as a result of uncertainty sparked by the crisis.

By Thursday, some 1,600 companies had moved their legal headquarters out of Catalonia.

Observers fear the standoff will spark unrest in the region, where industry bodies say tourist bookings are already on the decline.