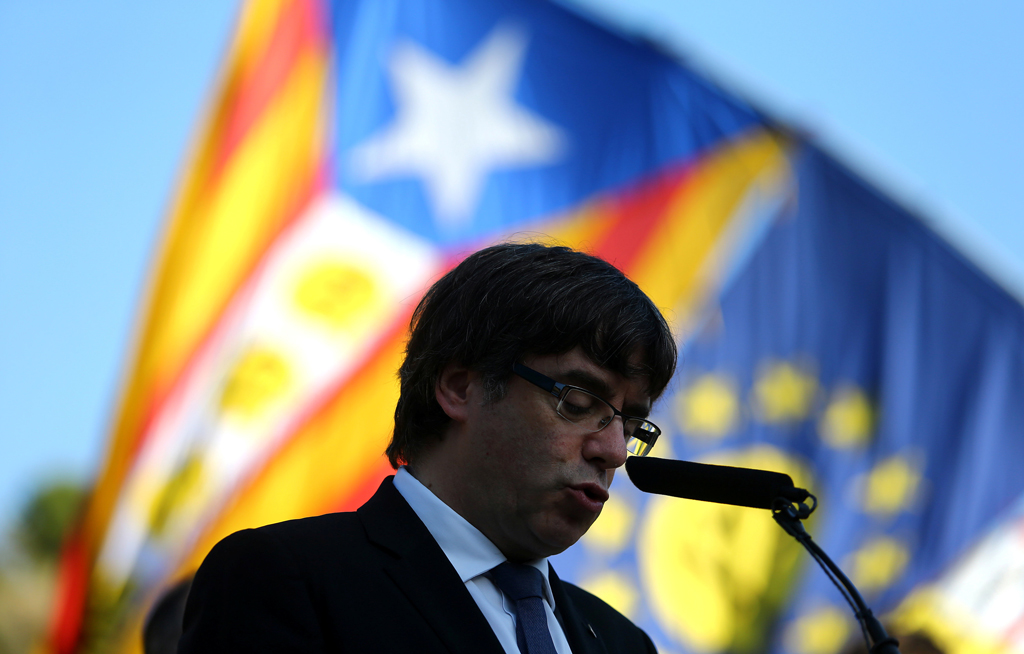 BARCELONA - Pressure mounted on Catalonia's leader Sunday ahead of a Madrid-imposed deadline to decide whether to defy international pleas for unity and declare independence or back down and unleash the wrath of his separatist allies.

Spain's government has given Carles Puigdemont until 10:00 am (0800 GMT) on Monday to clear up his ambiguous stance on secession after announcing last week that he was ready to declare the region "an independent state" but called for more time for talks.

Anything other than a full climb-down is likely to be viewed by Madrid as a declaration of independence which would prompt the government of Prime Minister Mariano Rajoy to launch steps to take direct control of the region.

Spain's most serious political crisis in a generation has already prompted hundreds of businesses to start leaving the prosperous northeastern region, sparking fears it may damage the eurozone's fourth-largest economy.

Puigdemont is under intense pressure from Madrid and European neighbours to abandon his independence push.

But he's also being squeezed by his separatist allies to deliver secession after a banned October 1 referendum on the matter saw those who voted overwhelmingly back independence.

"His commitment to the people who asked this of him on October 1 is very clear, which is why we believe he will go down this route," Marta Pascal, a senior official in Puigdemont's party, said Sunday.

But polls indicate that Catalans themselves are divided over independence, and many voters stayed at home during the plebiscite.

Officials in Madrid are watching Monday's deadline closely, but it is thought the Catalan leader may deliver what the central government deems another non-committal response.

"If that's the case, that will show that he doesn't want dialogue and so the Spanish government will need to take necessary measures to return to normality," said Interior Minister Juan Ignacio Zoido on Saturday.

Under article 155 of the Spanish constitution, the central government can take direct control of its devolved regions if it deems them to be acting against the national interest.

But such a move could spark further unrest in Catalonia.

At the same time, separatist groups have vowed to stage mass strikes and protests if Puigdemont backtracks.

On Sunday in Girona, a Catalan city where Puigdemont was once mayor, hundreds gathered in favour of independence, chanting the slogan: "No turning back!"

But the regional president, a 54-year-old former journalist, is keeping his cards close to his chest.

Laying a wreath at the tomb of former Catalan leader and separatist hero Lluis Companys, Puigdemont said his decision would be "inspired by his commitment to peace, civility and serenity, but also firmness and democracy."

Edge of a cliff

Zoido urged Puigdemont on Sunday not be "pressured by a radical minority who are his partners in government and who have brought Catalonia to the edge of a cliff."

He and two separatist lobby leaders are accused of sedition for their roles in a protest against the national police on September 20, and during the October 1 vote.

Puigdemont has asked for international mediation in the crisis, an idea Rajoy dismissed out of hand.

Madrid says it will not negotiate on a movement that violates the constitution, and EU leaders have presented a united front in favour of Spanish unity.

EU commission chief Jean-Claude Juncker has said that Catalan independence would create a domino effect for other secession-seeking regions in the bloc.

Separatists argue that Catalonia is shouldering an unfair burden by paying more in Spanish taxes than it gets back. They insist independence would allow the region of 7.5 million people to prosper.

But since the referendum, hundreds of companies have started leaving, including Catalonia's two largest banks. Ratings agency Standard and Poor's has warned of a recession in the region if the crisis drags on.