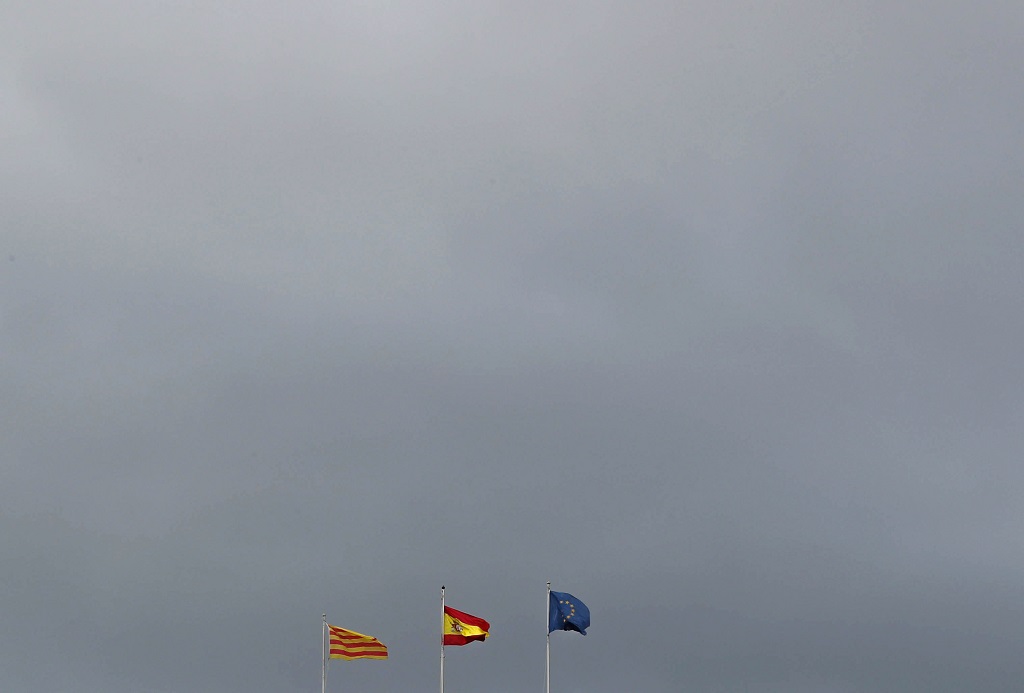 A Catalonian, Spanish and European flag fly on the roof of the Bank of Spain, three days after the banned independence referendum in Barcelona, Spain 4 October 2017.

BARCELONA - Tension mounted in Spain on Wednesday after Catalonia's leader vowed that the region would declare independence within days, defying a stern warning from the country's king that national stability was in peril.

But Catalan leaders dug in, buoyed by anger at a violent police crackdown against voters during Sunday's referendum on independence which had been banned by Madrid and the courts.

The Catalan government will "act at the end of this week or the beginning of next" to declare independence, its leader Carles Puigdemont told the BBC in an interview.

He was scheduled to give a further televised address at 1900 GMT on Wednesday.

The result will be submitted to the regional parliament which will have two days "to proclaim the independence of Catalonia," he said in a television interview.

The move would intensify the standoff with the central government, which along with the national courts has branded the referendum illegal.

Madrid has the power to suspend the semi-autonomous status that Catalonia currently enjoys under Spain's system of regional governments.

Prime Minister Mariano Rajoy has yet to respond publicly to Sunday's vote, but the king's intervention could clear the way for him to act.

"It is the responsibility of the legitimate state powers to ensure constitutional order," Felipe said.

Hundreds of thousands of Catalans rallied in fury on Tuesday during a general strike over violence by Spanish riot police against voters taking part in the referendum on Sunday.

'Fuel to the fire'

Felipe's dramatic intervention late Tuesday was a gauge of tension in Spain.

Catalan leaders "with their irresponsible conduct could put at risk the economic and social stability of Catalonia and all of Spain," he said.

Felipe repeated his earlier calls for harmony between Spaniards.

But after Sunday's violence, his address risked further fanning resentment in Catalonia.

"It was awful. It was a mistake whichever any way you look at it," Turull said of the king's speech.

"Instead of calming things, what it did was throw fuel on the fire."

Adding to tensions, a judge on Wednesday placed Catalonia's regional police chief Josep Luis Trapero and three other suspects under investigation for an alleged "crime of sedition."

The force has been accused of failing to rein in pro-independence protesters during disturbances in Barcelona last month.

A rich industrial region of 7.5 million people with their own language and cultural traditions, Catalonia accounts for a fifth of Spain's economy.

Spain's key IBEX 35 stock index fell by 2.3 percent Wednesday on the ongoing turbulence, with some big Catalan banks down more than six percent.

Catalan claims for independence date back centuries but have surged during recent years of economic crisis.

Puigdemont's regional government claimed that 2.26 million people took part in the poll, or just over 42 percent of the electorate, but the vote was held without regular electoral lists or observers.

The regional government said 90 percent of those who voted backed independence, although polls indicate Catalans are split.

The European Parliament is to debate the Catalonia crisis later on Wednesday.

US State Department spokeswoman Heather Nauert said Tuesday Washington was "saddened" by reports of injuries during Sunday's vote and called for "all parties to resolve their political differences non-violently."

Meanwhile, a grouping of Catalans opposed to independence called for supporters to join a counter-demonstration in Barcelona on Sunday. The call was backed by the regional branch of Spain's governing conservative Popular Party.