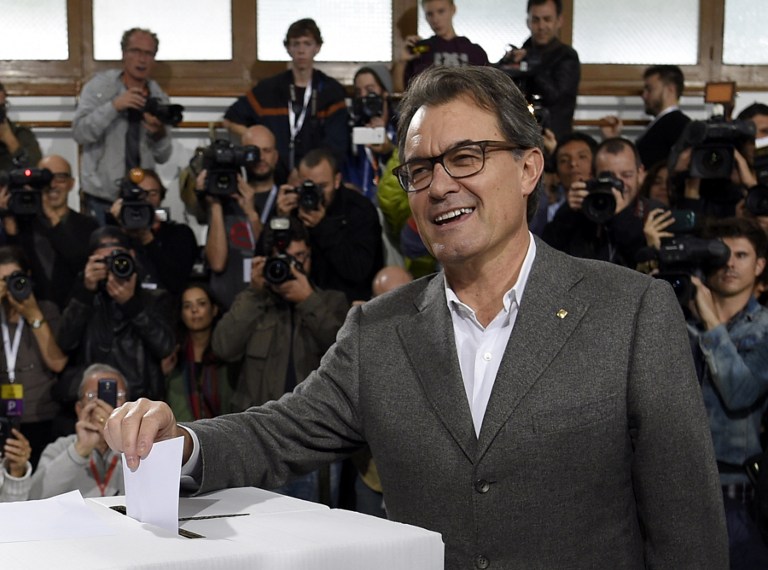 The president of Catalonia's regional government, Artur Mas casts his ballot on November 9 2014 in Barcelona.

BARCELONA - The leader of Spain&39;s Catalonia region Artur Mas called on Sunday for a "definitive referendum" on independence, after defying the central government by voting in a symbolic breakaway ballot.

Mas said the crowds lining up to vote in Sunday&39;s non-official ballot showed that Catalans deserved a full-blown referendum on independence and he hoped to persuade Madrid to drop its opposition to such a move.

"Despite the enormous difficulties we have found on our way, on November 9 we are right here... and a lot of people are participating in this outstanding event," Mas said.

Leaders in the rich northeastern Spanish region pushed ahead with Sunday&39;s vote in defiance of constitutional appeals by Spain&39;s government.

They were fired up by September&39;s independence referendum in Scotland --even though voters there rejected a separation from Britain.

Mas said Catalans had the right to hold a referendum like Scotland and the French-speaking region of Quebec in Canada, which voted against independence in 1995.

"We are going to try to convince people in Madrid after November 9 that the Catalan people deserve a referendum with all political consequences, as the Scottish people had some weeks ago and as the Quebecois people had some years ago. Why not Catalonia?" Mas said.

Spain&39;s Prime Minister Mariano Rajoy has said he cannot permit a referendum like Scotland&39;s because, unlike Britain, Spain has a written constitution that forbids it.

Madrid&39;s legal challenges forced Mas to water down his planned vote from a non-binding referendum to a merely symbolic ballot organised by volunteers.

Spain&39;s conservative government fiercely opposes independence for Catalonia, which accounts for a fifth of the country&39;s economy but is deep in debt after a financial and economic crisis in Spain.