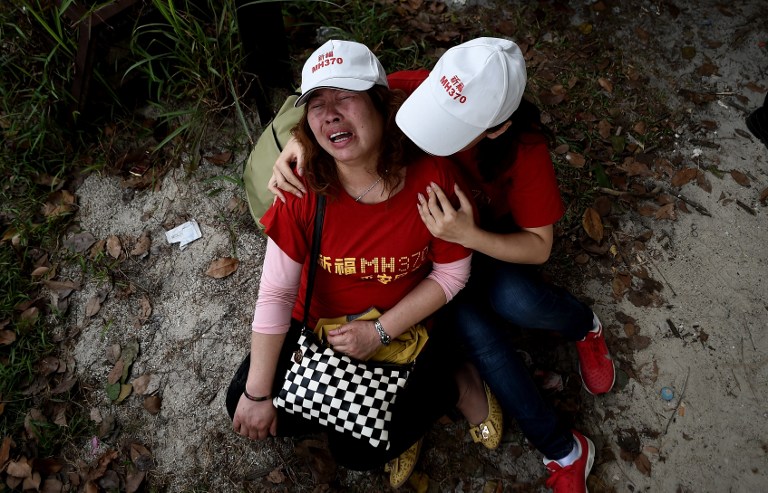 KUALA LUMPUR - Chinese relatives of those on board missing Malaysia Airlines flight MH370 protested outside the carrier&39;s office on Thursday demanding Malaysia withdraw a statement declaring all the passengers dead.

The Malaysian government last month officially listed the disappearance of Malaysian Airline flight MH370 as an accident and said all 239 people on board had perished in a move it said would pave the way for compensation claims.

However, the announcement immediately sparked outrage among distraught family members who have shunned offers of compensation as some cling to hope that their loved ones may still be alive.

About 15 people gathered outside the airline&39;s gates under a hot sun on Thursday wearing white caps and red T-shirts bearing the words: "Pray for MH370."

They held placards in English reading: "Who can tell us what happened", "Come back MH370" and "Today it is us, Tomorrow it could be you."

"My husband was on the flight. We want the Malaysia government to cancel the declaration that they made," Kelly Wen, wife of a Chinese passenger who was only identified as Li, told AFP.

"My daughter is still alive!" cried 56-year-old Zhang Hui Jun, while being comforted by another woman from the group.

Malaysia Airlines officials later transported the protesters to the nearby Subang Airport and gave them lunch.

Later three representatives of the Chinese group were ushered away in a van to meet Malaysia Airlines group CEO Ahmad Jauhari Yahya.

One of the representatives, Wen Wan Shen, whose only son Yung Sheng was on the plane, told reporters that the meeting lasted for 30 minutes and that they handed a letter to Ahmad Jauhari demanding that the declaration of accident be overturned as there is no credible evidence.

63-year-old Wen said Malaysia Airlines should pay the families who are struggling with their livelihoods after losing their loved ones and that they will escalate their demands to other officials including prime minister Najib Razak.

The protestors said they are here for the long haul and will stay as long as possible. Current visa rules allows them to remain in Malaysia for 30 days.

More Chinese families of MH370 victims are expected to arrive in Malaysia this week ahead of the Lunar New Year celebrations.

MH370 disappeared on March 8, 2014 after inexplicably diverting from its Kuala Lumpur-Beijing course.

The airliner is believed to have crashed in the southern Indian Ocean off western Australia but no trace has been found. Australia has been spearheading the hunt for the plane.

Chinese passengers accounted for about two-thirds of the 239 people who were aboard the Boeing 777.