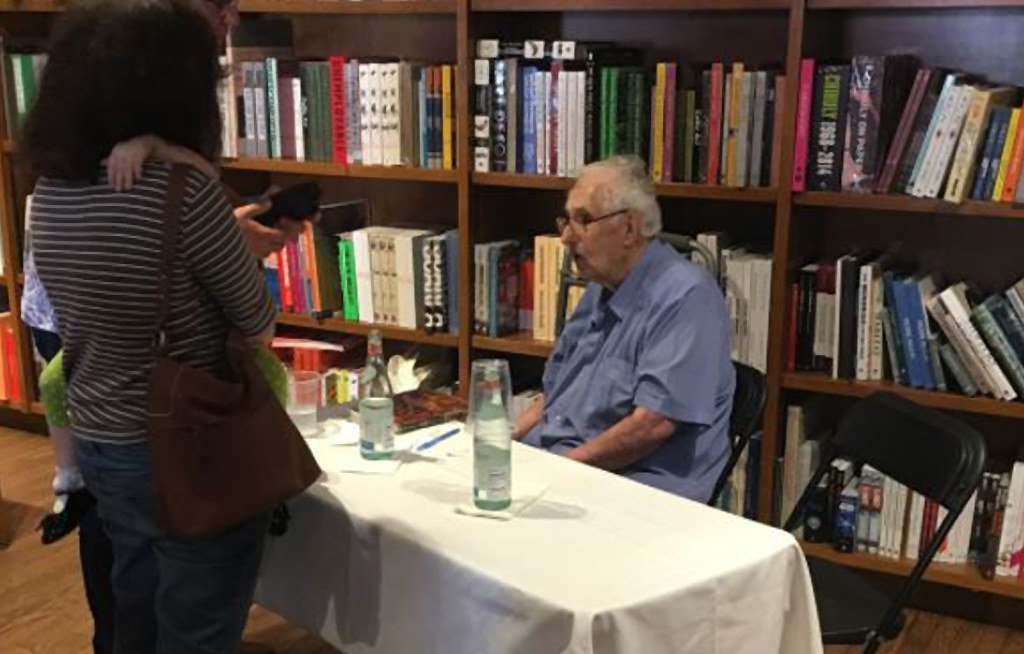 A picture of Antonio Veciana, posted to Twitter on 13 May 2017 by his daughter, Ana Veciana-Suarez, talking to fans at the Books & Books bookstore in Florida, US.

MIAMI - A Cuban CIA spy who dedicated his life to trying to kill Fidel Castro and destabilise the communist government, Antonio Veciana today says his is "the story of failure."

It is a tale he recounts with rage -- and no regrets.

"I was an unlikely terrorist," he said in his book "Trained to Kill," co-written with journalist Carlos Harrison. "I was skinny, asthmatic, and plagued with insecurities."

My dad, Antonio Veciana, being interviewed by AFP on his book "Trained to Kill" written with Carlos Harrison. pic.twitter.com/6ejxZQHvcO

The 88-year-old anti-Castro activist, sitting with a medical walker by his side in his daughter's Miami living room, clarifies those words.

"The work I did is what terrorists do. It's just that it wasn't called that."

The book details how CIA agent David Atlee Phillips -- known by the alias "Bishop" -- recruited him in 1959 and trained him in Havana to kill Fidel Castro, who died last year of natural causes.

READ: How Fidel Castro changed Cuba: a small island at the centre of the world

"Bishop invited me to lunch," he says. "It was easy, he didn't have to convince me about the danger of communism in Cuba."

Originally an accountant at Cuba's National Bank, Veciana was taught to be invisible, to plot, to be unscrupulous and to distrust.

"At first, the idea was to destabilise," he says. "In countries with destabilisation, people believe rumours."

"That was my job -- creating those rumours."

The first was an alleged bill under which the Cuban government would strip parents of legal custody over their children.

Parents then sent some 14,000 children to the United States in an exodus known as "Operation Peter Pan."

"Many parents later met with their children, but others could not see them again, because they died or because they couldn't leave the country," Veciana said.

Between 1960 and 1962, parents took their children out of Cuba via offices of the Catholic Church. Minors without adult companions were received at camps in Florida.

Veciana says he has no regrets over his role in separating these children from their parents.

"It might have been irresponsible, but what I did was out of conviction," he says.

"At the time I was convinced I was doing the right thing, so I would do it again."

'A story of failure'

Veciana fled to the United States in 1961 following a botched attack on Castro that would have easily led authorities to him.

When contacted by Bishop in Miami, Veciana founded the anti-Castro paramilitary group "Alpha 66," which during the 60s and 70s carried out commando-type strikes against the Castro regime.

"These attacks encouraged hope, and when they were published in the press there was euphoria -- people still had hope they could win the battle," says Veciana.

He acknowledged however that the success and magnitude of the attacks were "always exaggerated."

Like many Cuban-Americans of his age, Veciana holds a grudge against president John F. Kennedy for "betraying" Cuban exiles for withdrawing US military support from the failed anti-Castro Bay of Pigs invasion of Cuba in 1961.

He also claims to have seen Bishop meeting Lee Harvey Oswald three months before Kennedy's assassination in Texas in 1963. Oswald was later identified as the sole attacker.

A later attempt to kill Castro in Santiago de Chile failed, and years later Veciana had to abandon another attempt on the Cuban leader's life.

Veciana's effort to discredit Ernesto "Che" Guevara after his 1967 death in Bolivia also fizzled. The Argentine revolutionary instead became a leftist icon.

"I really try not to think too much about it, because mine is a story of failure," Veciana says. "When you fail because of different circumstances you feel you did not do the right thing -- or that luck did not help you -- but you feel like a failure."

In 1979, after several attempts against his own life, Veciana finally threw in the towel and retired from the espionage and hit-man business.

"My secret life was over," the final words of his book read.