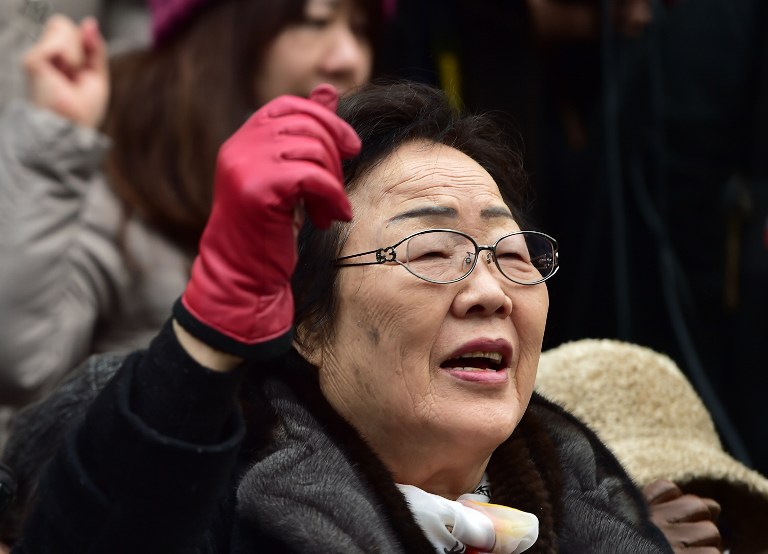 Lee Yong-Soo, who was forced into wartime sexual slavery for Japanese soldiers, shouts slogans during an anti-Japanese rally in Seoul on 30 December 2015.

SEOUL - Hundreds of South Koreans people gathered in front of the Japanese embassy in Seoul to hold a “Wednesday rally” that has been staged every week for more than 20 years.

Two elderly South Korean women who fell victim to imperial Japan’s sex enslavement during World War II joined the rally, shouting for the still unresolved war crime and weeping at the atrocities they had suffered under the 1910-45 Japanese colonial rule of the Korean peninsula.

Foreign ministers of South Korea and Japan met in Seoul on Monday, reaching a final and irreversible agreement on the comfort women, a euphemism for women forcibly recruited to serve in Japan’s military brothels during the devastating war.

Japan vowed to offer 1 billion yen (about R128-million) to help South Korea set up an assistance fund for the victims. Japanese Prime Minister Shinzo Abe delivered his message of apology and remorse “from his heart” to the wartime sex slavery victims.

In return, South Korea pledged a final and irreversible agreement on the war crime and promised to refrain from criticizing Japan in the international society.

Despite the inter-governmental agreement, the victims and civic groups supporting the comfort women called for a complete resolution on the issue with an unequivocal apology and legal reparations from Japan.

The agreement was criticised in South Korea for failing to extract Japan’s acknowledge of “legal” responsibility and the absence of Abe’s unequivocal apology for the “forced” recruitment. The absence of “legal” responsibility made Japan claim that the 1 billion yen provision is not damages against the war crime but a mere conciliatory compensation, causing strong backlash from the victims and activists.

“Japan’s official apology and legal reparation must be given rightfully to resolve the deep sorrow” of the deceased victims, Lee Yong-Soo, 88, one of 46 living South Korean victims, said during the Wednesday rally, weeping when she mentioned the brutalities she had suffered.

Police estimated that about 700 people participated in the 1,211th round of the rally, which has been held every Wednesday since 8 January 1992 in front of Japan’s embassy in South Korea.

South Korean historians said that as many as 200,000 women, mostly from the Korean Peninsula and from China and Southeast Asian nations, were forced into sex slavery. Among 238 South Koreans who identified themselves as former sex slaves, only 46 are alive. Nine victims passed away in 2015 alone due to their old age.

South Korean President Park Geun-hye asked the victims and the public to understand the agreement, saying that it was urgent for the victims’ old age and the harsh reality.

The Korean Council for Women Drafted for Military Sexual Slavery by Japan, an advocate group which hosted the rally, vowed to continue the rally every Wednesday.

Controversy remained over a “girl statue” standing in front of the Japanese embassy in Seoul. The statue, erected there in 2011 with funds donated by citizens, describes a teenage girl forcibly conscripted and raped by Japanese soldiers.

South Korea agreed with Japan to make efforts to properly resolve the statue issue through talks with the relevant civic groups, while the victims have claimed that it was not a matter of discussion between governments because it was erected by citizens and symbolizes South Korea’s painful history.
Citing Japan’s government officials, multiple Japanese media reported that South Korea secretly agreed to remove the statue in front of the Japanese embassy in Seoul to elsewhere. The reports were flatly denied by South Korean officials, according to South Korean media. There are 24 such statues at home and nine in the United States.