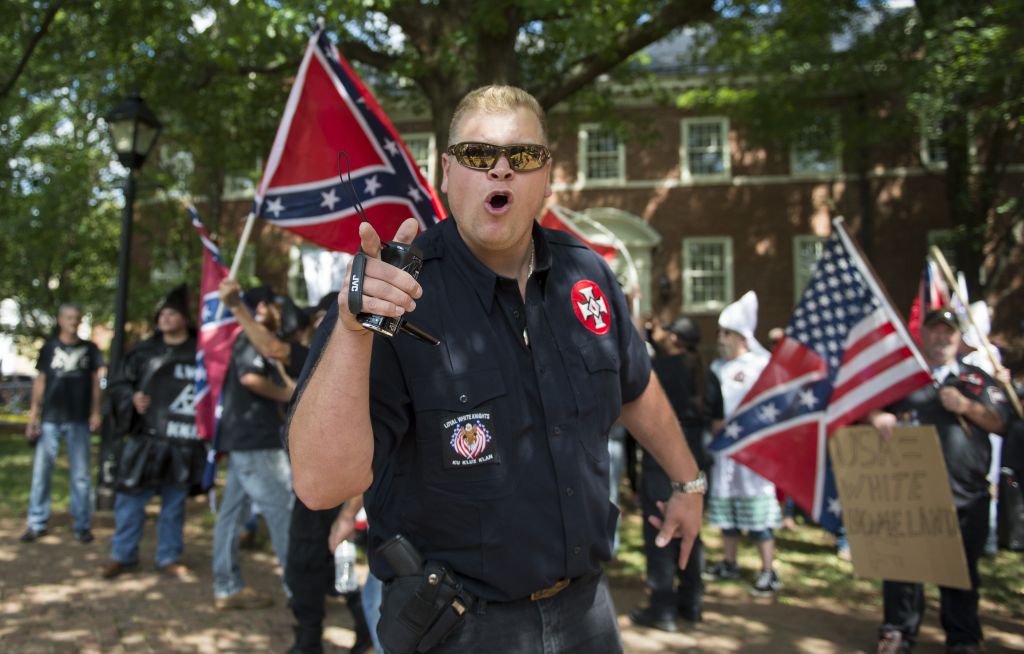 A member of the Ku Klux Klan shouts at counter protesters during a rally, calling for the protection of Southern Confederate monuments, in Charlottesville, Virginia on July 8, 2017.

CHARLOTTESVILLE, United States - Supporters of the white supremacist Ku Klux Klan marched in Charlottesville, Virginia on Saturday to protest the planned removal of a statue of General Robert E. Lee, who oversaw Confederate forces in the US Civil War.

The Klan marchers were met by hundreds of jeering counter-protesters in this quiet university town, where the protest by the notorious white power group was authorised by officials in Virginia on free speech grounds.

Dozens of marchers -- some carrying Confederate flags, a handful in the distinctive white hood worn by Klan members -- paraded past hundreds of people shouting "racists go home!" and other chants.

The Klan finally arrived (heavily protected by the police). All 30 of them. Many hundreds of anti-racists. #Charlottesville #BlocKKK #KKK pic.twitter.com/Hjzrt2YQHp

The two groups were separated by a metal barricade and a phalanx of armed police.

Critics say the far right, both here and across the United States, has been energized by Donald Trump's election to the presidency.

Be it the Ku Klux Klan, the alt-right or generic white supremacists, these conservatives have found a new cause in defending the Confederate flag and monuments in the US South that recall the era of slavery.

They are outdated, awful symbols of racism for many Americans, who are mobilizing to have them taken down from public places.

Anti-Klan protesters in Charlottesville got an early start overnight, throwing red paint on the bronze equestrian statue of the saber-wearing Confederate general. City workers were scrubbing the paint off early Saturday.

Watching the scene, Mason Pickett, a 60-ish retired businessman, said he regretted the decision by Charlottesville -- which he said had become an "ultraliberal city, even socialistic" -- to remove the statue.

"Statues can be good history, they can be bad history -- you may not like it and you may love it, but it's history," he said.

But Tina Young, a 49-year-old lawyer, said it was past time to remove signs of the state's Confederate past. Virginia and other Southern states had had plenty of time to do so, she said.

As to Robert E. Lee, she added, "he did represent slavery, he did fight a war against our government which killed thousands and thousands of soldiers, he could have chosen the better side but he didn't."

The debate about the legacy of key figures in many former Confederate states extends from Louisiana to Georgia and the Carolinas, and even in Washington, where a stained glass window in the National Cathedral depicts a Confederate soldier. Slaves in Washington were freed only a year after the start of the Civil War.

No major battle in that 1861-1865 war was fought in Charlottesville, population 50,000. But its passions have been stirred.

A pro-Democratic town linked to the university founded in 1819 by retired president Thomas Jefferson, people in Charlottesville said they abhor the planned arrival of members of the Loyal White Knights of the Ku Klux Klan, a small white supremacist group based in North Carolina.

City officials said about a thousand people were present at the march, of whom about 50 were KKK members.

About two dozen people were arrested, mostly for failing to disperse as the rally ended, officials said.

Just a few of the demonstrators wore the white hoods so emblematic of the group and part of the costume associated with lynchings and cross burnings.

In this town of handsome red brick buildings, the decision in February to remove the Lee statue after years of debate has left deep wounds.

And it is actually on hold: a judge suspended the town council's narrow decision for six months until a court reviews the case.

"Robert E. Lee has a lot of admirers across the South, partly because Southern education has taught that he was this noble man who was a gentleman and worked very hard after the war for reconciliation," said Kristin Szakos, the town councillor behind the drive to bring down the statue.

READ: Teen could be charged for wearing KKK outfit

"For a lot of people he is also more problematic, especially in the statue where he is depicted in full battle gear, riding against the United States of America," she added.

"We have lots of ways to learn history that aren't giant statues overlooking our downtowns."

In its heyday in 1925, the KKK had as many as four million members.

These days it has from 5,000 to 8,000, mainly in the deep South, according to the Southern Poverty Law Center, which monitors and studies extremism in America.