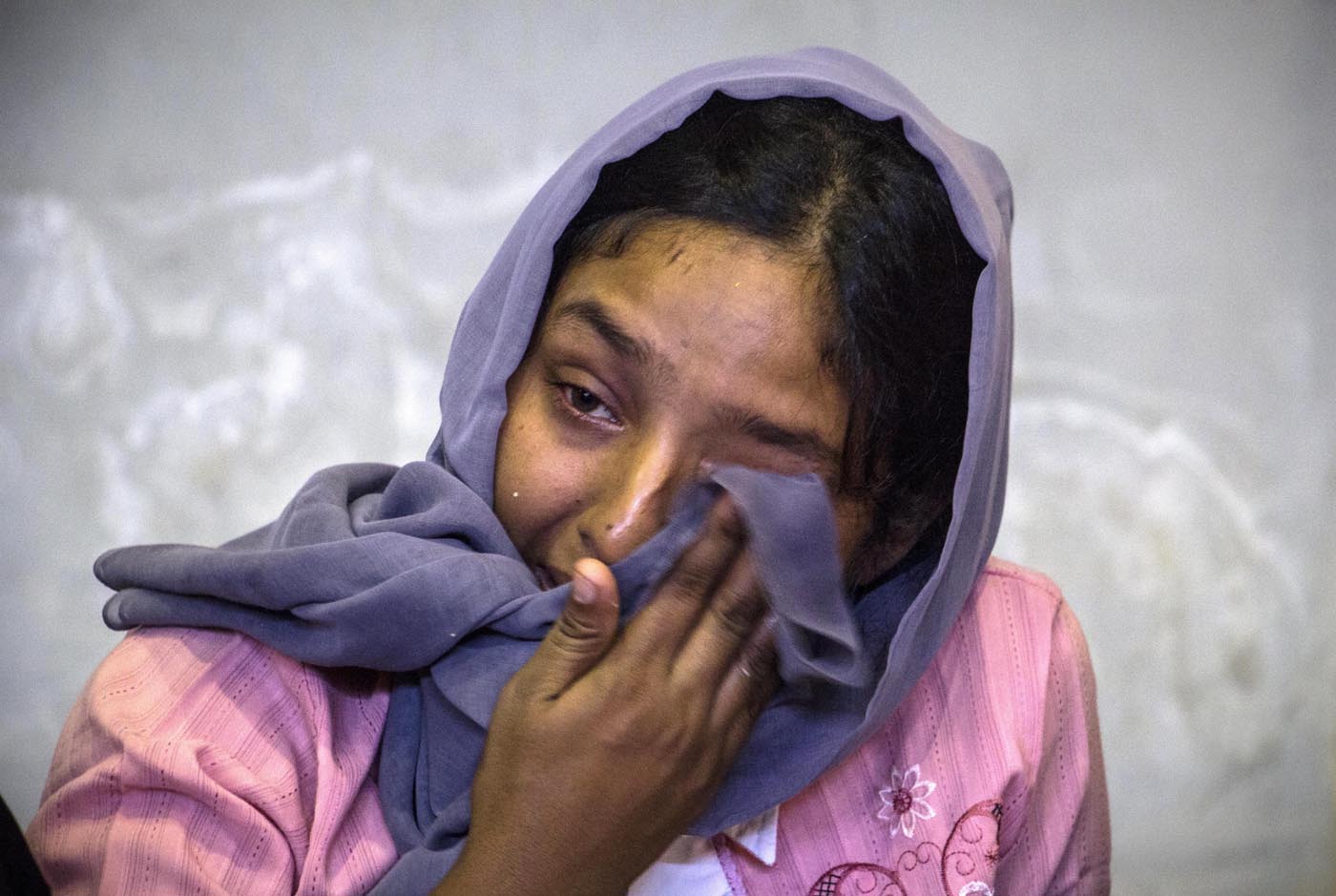 File: A Rohingya migrant from Myanmar cries in a sport stadium, North Aceh, Sumatra, Indonesia. About 800 migrants have been brought ashore on Friday on the east coast of Aceh by fishermen.

LANGSA, INDONESIA - Rohingya and Bangladeshi migrants on board a foundering vessel off Indonesia fought with axes, knives and metal bars in vicious clashes that left at least 100 dead, survivors said as they recovered from their ordeal.

Both groups described bloody, nightmarish scenes after the overcrowded vessel was abandoned by its crew last week, with desperate migrants "slaughtering" each other in fierce battles over dwindling supplies.

Exhausted survivors, many bearing bruises and cuts, told AFP from camps in Aceh province they believed between 100 and 200 people were killed in the fighting that erupted Thursday on the boat, which was carrying hundreds of migrants.

They are among nearly 3,000 Rohingya and Bangladeshis who have come ashore in the past week in Southeast Asia, after a Thai crackdown disrupted long-established human-trafficking routes.

While many were hacked to death on board, others jumped from the ship as they sought to escape the carnage, and those that survived were rescued by local fishermen and brought to shore. Both sides blamed the other for starting the fighting.

"Suddenly the Bangladeshis came out of the deck, and they attacked all of us who were on the top of the boat," said Rohingya migrant Asina Begun, 22, speaking to AFP from Langsa, an Aceh town where most of the migrants were taken.

"Those who wanted to save their lives had to jump in the sea, but my brother could not. When they found him, they beat him and then they slaughtered him. After that they threw him into the sea."

However the Bangladeshis said the Rohingya, a Muslim minority fleeing persecution in Myanmar, had been favoured by the boat captain, who only spoke a Myanmar language and gave them all the food and water. They said they were attacked after begging the Rohingya for supplies.

Mohammad Murad Hussein, a Bangladeshi, told how the Rohingya were on the top deck of the boat and the Bangladeshis, who made up the bulk of passengers, were on a lower deck.

As fighting erupted, the Rohingya sought to stop the Bangladeshis coming onto the upper deck by attacking them with axes and spraying water at them that was laced with pepper, he said.

"From the upper deck they were spraying hot water, pepper water at us, anyone who went up was hacked at with a cleaver," said the 30-year-old, whose body was covered with many scars.

"In the end we realised we would die. Then we decided to fight them and bring them down with us."

The boat started leaking and sinking as the violence escalated, at which point many people started jumping into the water, he said.

However, Rohingya refugee Mohammad Amih said the Bangladeshis attacked the Rohingya, after they insisted the remaining water on board should be saved for the children.

Amih said that he had told the Bangladeshis: "We should keep it for the children because they cannot survive without water."

As the Bangladeshis -- most of whom are seeking to escape from grinding poverty back home -- came on to them, Amih said that he tried to hide among the women on board but was soon discovered.

"They hit me on the head and then threw me overboard. After that I swam towards the local fishermen&39;s boats," he said.

As the migrants recovered from the ordeal, their thoughts turned to their families back home. Many have been out of contact with their loved ones for two months, since embarking on the sea voyage.

Up to 6,000 Rohingya, Bangladeshi migrants stranded at sea http://t.co/1YfAYFRNNI pic.twitter.com/m5HHzy3tdT

ll our families back home, they don&39;t know whether we are alive or not. They probably think we are all dead," said Bangladeshi migrant Mohammad Meshar Ali.