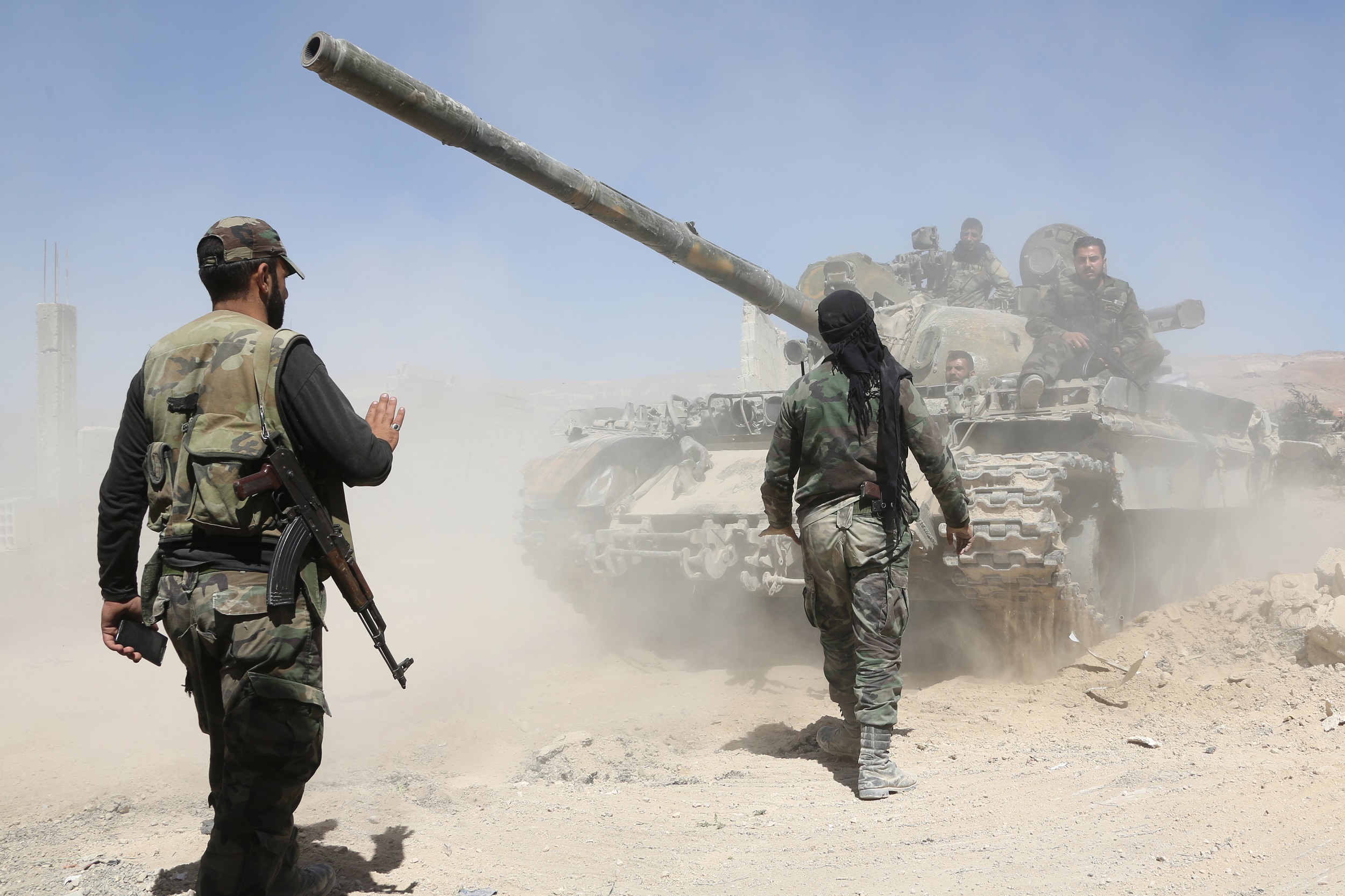 Pro Syrian regime forces are seen as they advance towards the town of Douma, the last opposition holdout in Eastern Ghouta, after regime troops resumed a military blitz to pressure rebels to withdraw.

BEIRUT, Lebanon - A Syrian military airport was hit with deadly missile strikes, state media reported on Monday, after the US and France warned of a strong response to "horrific chemical weapons attacks" on a rebel-held region near Damascus.

Washington denied responsibility for the strike on Syria&39;s central Tayfur air base, which came just hours ahead of an urgent UN meeting on Monday over the reported use of toxic gas on the town of Douma.

US President Donald Trump and his French counterpart Emmanuel Macron spoke by phone and vowed a "strong, joint response" to the suspected chemical attack that killed dozens, the White House said Sunday.

It added that the regime of Syrian President Bashar al-Assad "must be held accountable for its continued human rights abuses".

Trump had earlier taken to Twitter to issue a blistering warning to the Syrian regime and its allies.

"Many dead, including women and children, in mindless CHEMICAL attack in Syria," Trump wrote, lashing out at Russia&39;s Vladimir Putin, a key ally of the regime.

Many dead, including women and children, in mindless CHEMICAL attack in Syria. Area of atrocity is in lockdown and encircled by Syrian Army, making it completely inaccessible to outside world. President Putin, Russia and Iran are responsible for backing Animal Assad. Big price...

....to pay. Open area immediately for medical help and verification. Another humanitarian disaster for no reason whatsoever. SICK!

Damascus and its allies have denounced the accusations, with the Syrian regime brushing them off as an "unconvincing broken record".

Russia&39;s foreign ministry called the latest reports of a chemical attack a provocation.

"A military intervention under far-fetched and fabricated pretexts in Syria, where there are Russian soldiers at the request of the legitimate Syrian government, is absolutely unacceptable and could have the most dire consequences," it said.

Syrian state news agency SANA said early Monday that "several missiles" had hit the Tayfur airport, later adding that there were "dead and wounded" in the strike, without giving exact casualty numbers.

SANA first said the missile strike on the Tayfur base was a "suspected US attack," but later withdrew all reference to America.

The Pentagon denied it was behind the Syria raid. A military spokeswoman for Israel, which has bombed Syrian government positions including those linked to chemical weapons, declined to comment Monday.

Regime forces, backed by Russia, have pounded Eastern Ghouta in a seven-week assault to dislodged rebel fighters, killing more than 1,700 civilians and prompting tens of thousands to flee.

In a joint statement with the Syrian American Medical Society, the White Helmets has said more than 500 cases were brought to medical centres "with symptoms indicative of exposure to a chemical agent".

It said six died while being treated, and rescuers found 42 more people dead in their homes with similar conditions.

Video for one of the missiles which fall down on Douma city carrying a chemical gas, dozens were killed and hundreds still suffocating. pic.twitter.com/4Qjr0uxezK

Footage posted online by the White Helmets, which it was not possible to verify, showed victims with yellowed skin crumpled on the ground and foaming at the mouth.

"The scene was horrifying. So many people were choking, so many people," White Helmets member Firas al-Doumi told AFP from inside Douma.

A member of the Syrian Arab Red Crescent (SARC) inside the town said volunteers were still trying their best despite the organisation&39;s Douma branch being out of operation.

"This morning, we drove around and found bodies lying in the streets. We took four trips to bring the corpses back, each with three or five dead," the SARC member told AFP.

The reports prompted international anger, with UN chief Antonio Guterres saying any confirmed use of chemical weapons would be "abhorrent".

The European Union said "the evidence points towards yet another chemical attack by the regime", while opposition ally Turkey stated it had a "strong suspicion" Assad was to blame.

But key backer Iran came to Assad&39;s defence, saying the allegations were a Western conspiracy and echoing Russia&39;s warning against foreign military action.

Since February 18, Syrian and Russian forces have waged a fierce military onslaught and negotiated two withdrawals to retake control of 95 percent of Ghouta.

After days of talks and a respite from bombing, negotiations collapsed and strikes resumed on Friday, killing nearly 100 people, according to the Syrian Observatory for Human Rights.

On Sunday, state media announced a deal was agreed for Jaish al-Islam to leave Douma within 48 hours and release hostages it was holding.

Russia&39;s military said it had hammered out an agreement for a "ceasefire, the disarmament of this armed group and resumption of the operation for the withdrawal of fighters".

Moscow said all military operations around Douma had now halted and that 100 buses had arrived in the town to help start ferrying out some 8,000 fighters and 40,000 of their family members.

It said the move proved "no chemical weapons were used in this area".

Jaish al-Islam did not confirm the deal, but a civilian committee from Douma participating in the talks said a "final agreement" was reached for rebels to leave.

Ghouta was among the areas hit in a 2013 sarin gas attack blamed on Syria&39;s government.