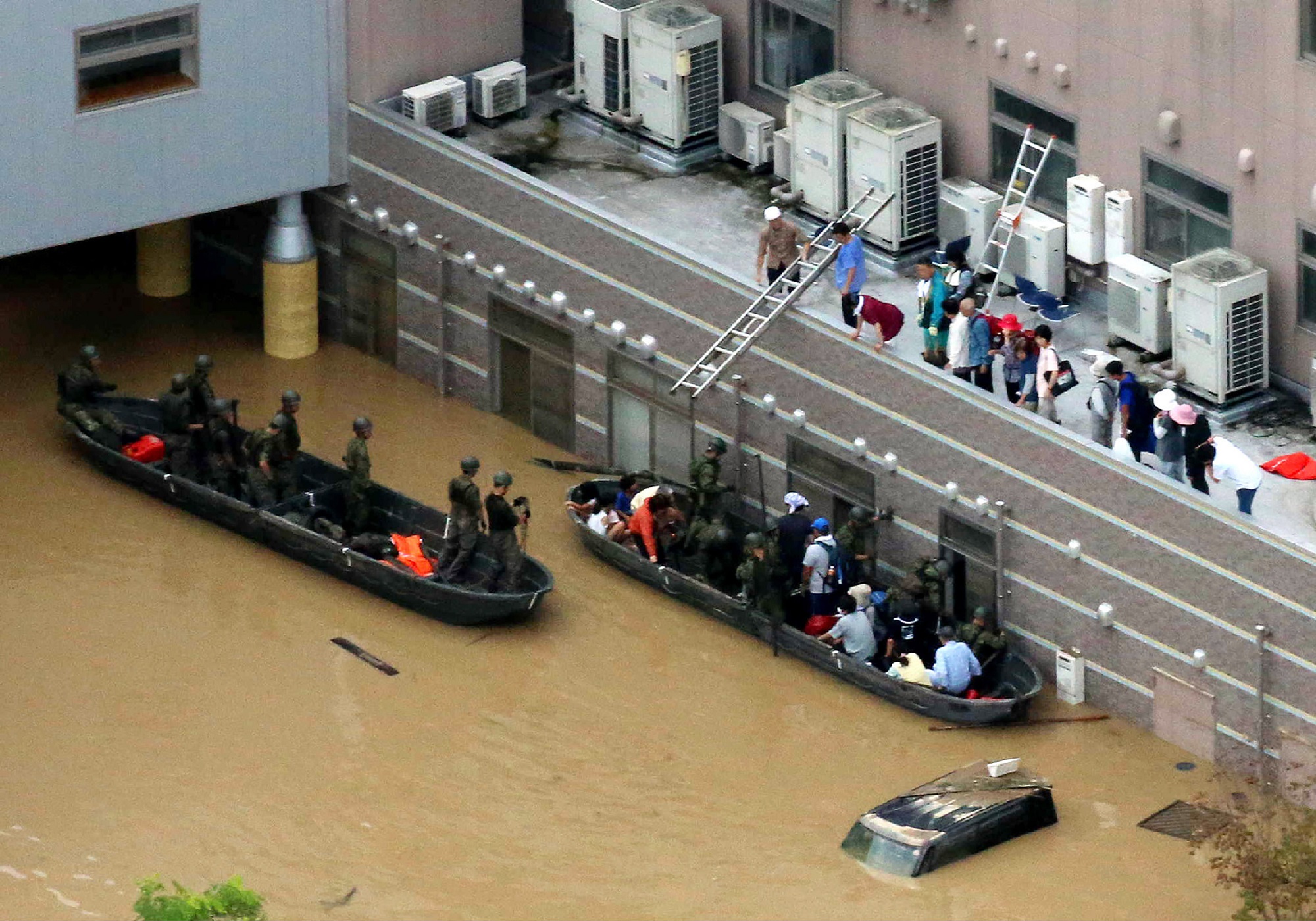 People are rescued by boats from Mabi Memorial Hospital that was isolated due to flood damage caused by heavy rain in Kurashiki, Okayama prefecture.

HIROSHIMA - The death toll from record rains that have devastated parts of Japan rose Sunday to at least 57, officials said, as rescue workers and troops struggled in the mud and water to save lives.

Local media put the toll at 67, with dozens more people missing and the number of fatalities expected to rise.

Earlier Sunday, Prime Minister Shinzo Abe warned of a "race against time" to rescue flood victims as there were still many people whose safety has yet to be confirmed.

The torrential downpours have caused flash flooding and landslides across central and western parts of the country, prompting evacuation orders for more than two million people.

The rain has completely blanketed some villages, forcing desperate residents to take shelter on their rooftops with flood water swirling below as they wait for rescue.

Over two million people have been told to evacuate, but the orders are not mandatory and many remained at home, becoming trapped by rapidly rising water or sudden landslides.

The meteorological agency issued its highest level alert for two new regions on Sunday, before lifting them after rains began subsiding later on the day.

Over 50,000 rescue workers, police and military personnel have been mobilised to respond to the disaster, which has left entire villages submerged by flooding, with just the top of traffic lights visible above the rising waters.

"I was in a car and massive floods of water gushed towards me from the front and back and then engulfed the road. I was just able to escape, but I was terrified," 62-year-old Yuzo Hori told the Mainichi Shimbun daily in Hiroshima on Saturday.

Though the rains began last week when a typhoon made landfall, the worst downpours hit from Thursday, when a construction worker was swept away by floodwaters in western Japan.

The toll has risen steadily since then, and the conditions have made rescue operations difficult, with some desperate citizens taking to Twitter to call for help.

The floods have halted production at plants across the affected region, with reports of electricity, water and mobile phone network outages.

The disaster is the deadliest rain-related crisis in Japan since 2014, when at least 74 people were killed in landslides caused by torrential downpours in the Hiroshima region.