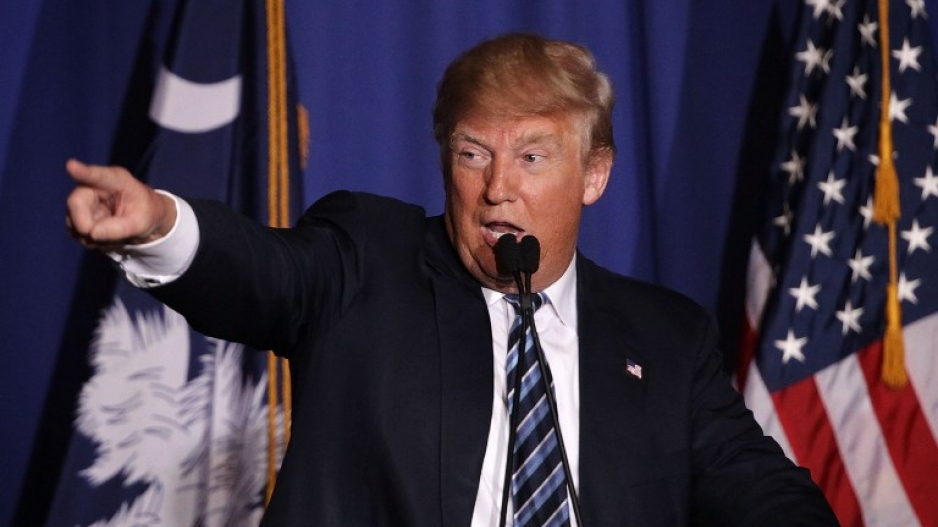 CHARLESTON, United States - When Republican frontrunner Donald Trump offered a provocative retort Thursday to criticism by Pope Francis, it may have been a calculated political move to boost his standing ahead of South Carolina&39;s presidential primary.

Two-thirds of South Carolinians are Protestants, with evangelical voters comprising the largest voting block in the state during its Republican primary, which is being held on Saturday.

The evangelical faithful are often suspicious of hierarchical authority, and a Pew Institute study in January said liberal Americans have a more favourable view of the leader of the Roman Catholic Church than conservatives.

This could serve in Trump&39;s favor when it comes to the spat between him and the pontiff, who triggered the controversy when he said the billionaire real estate mogul is "not a Christian" because he wants to build a wall on the US southern border to keep out illegal immigrants.

The remarks led to a torrent of media coverage, even as Francis cautioned his statement by saying he still wanted to see if Trump had made such comments and would "give him the benefit of the doubt."

Trump&39;s response was swift, stern and par for the course for his campaign, in which he has refused to let a criticism go unchallenged.

"For a religious leader to question a person&39;s faith is disgraceful," Trump said in a statement that he read to a campaign crowd in Kiawah Island, South Carolina.

The proper response by a prospective leader of the free world would go something like this: https://t.co/ij5OMcRa3A

Was Trump&39;s biting response a ploy to gain evangelical support some 48 hours before the critical primary?

"With me, I just tell the truth," he added, stressing that "we need borders, we have to stop illegal immigration. It&39;s killing our country."

Trump says Pope will have "wished and prayed" I was president if ISIS attacks Vatican: https://t.co/zcC2hCU07Z https://t.co/CxBA9rmgMh

A Trump surrogate wasted no time in pointing out the apparent hypocrisy in slamming Trump for wanting to build a wall.

The bombshell back-and-forth dominated the campaign Thursday, with rivals Jeb Bush and Marco Rubio wading in carefully to suggest the pope&39;s advice was not entirely welcome.

"I don&39;t question anybody&39;s Christianity because I honestly believe that&39;s a relationship you have with your creator," Bush told reporters.

"It only enabled bad behavior when someone from outside our country talks about Donald Trump."

Bush is Catholic, as is fellow Floridian Rubio, and they appeared to send the gentle message that Francis, who had just completed a visit to Mexico, should stick to his role as a religious leader.

"I think the Holy Father recognises or should recognise - and I believe he does - how generous America is," Rubio said.

"When it comes to accepting both refugees and immigrants, no nation on this planet is more welcoming, more open or more compassionate than the United States," Rubio added.

"Certainly a lot more welcoming in our laws than Mexico is."

In his historic speech before the US Congress last year, the pope urged US lawmakers to mobilize against climate change, take in more refugees and abolish the death penalty -- positions opposed by many Republicans.

Catholic League president Bill Donohue told CNN he felt Francis was "set up" by a reporter asking about Trump.

Father Timothy Kesicki, president of the Jesuit Conference, said the pope was reacting less to Trump himself and more to the gospel&39;s opposition to building barriers.

"I think he&39;s attacking an issue more than a person," Kesicki said on CNN.

The ultimate question is whether South Carolina&39;s evangelicals line up behind Trump on Saturday.

Senator Ted Cruz narrowly captured Iowa, the first state to vote in the nomination battle, thanks to evangelicals.

Reverend Don Flowers of Providence Baptist Church in Charleston told AFP he was "not convinced this year there is going to be an evangelical bloc of voters going to one candidate."

That could spell a clear victory for Trump if he neutralises Cruz&39;s advantage with religious voters.

At the nearby St. Matthew&39;s German Evangelical Lutheran Church, Pastor James Blalock suggested Trump&39;s remarks might have been out of line.

"The pope has better credentials to comment about what is Christian and what is not than Donald Trump," Blalock said.