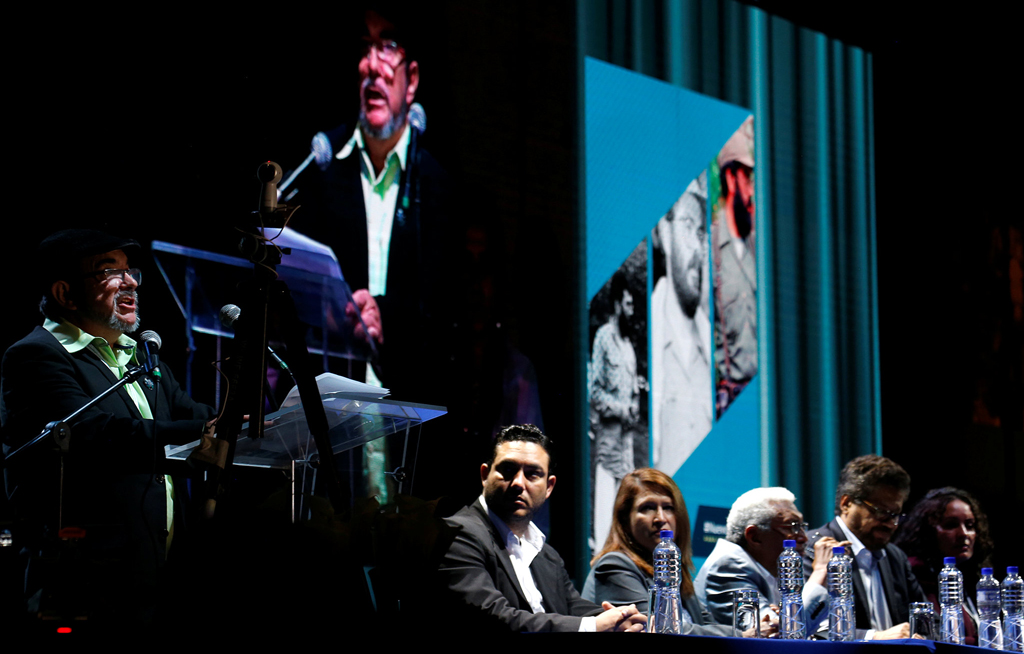 BOGOTA - Colombia's leftist FARC rebels sought political rebirth on Sunday as they launched steps to transform into a party and seek elected office after disarming to end a half-century war.

About 1,200 delegates from the freshly demobilized Revolutionary Armed Forces of Colombia attended the opening of a founding congress to choose their political representatives ahead of next year's general elections.

"At this event we are transforming the FARC into a new, exclusively political organization," said the force's commander Rodrigo Londono, also known as Timochenko.

He said the group will advocate "a democratic political regime that guarantees peace and social justice, respects human rights and guarantees economic development for all of us who live in Colombia."

What's in a name

Having completed disarmament last month, the FARC will meet mostly behind closed doors this week to choose a name for the party and election candidates.

Another former commander of the force, Ivan Marquez, said he expected the movement to call itself the Alternative Revolutionary Force of Colombia.

However, Timochenko canvassed opinion on Twitter and most respondents favored the name "New Colombia."

"Some want to keep the word 'revolutionary' while others want to change that to show that this is a new start," Masse said.

Regardless of how many votes they may win, the peace deal signed with the government last year guarantees the new party five seats in each of the two legislative chambers for two terms.

"We hope to get enough votes not only to justify those five senates and five lower house representatives, but also we aspire hopefully to achieve an even greater representation," former guerrilla commander Carlos Antonio Lozada told AFP.

Timochenko has ruled out the new party fielding a presidential candidate.

But he said it will support a candidate who guarantees the peace deal the FARC signed with center-right President Juan Manuel Santos.

The FARC formed as a communist movement in 1964 from a peasant uprising for rural land rights.

Now after 53 years of attacks and kidnappings, the FARC in its new form faces a struggle for acceptance.

Recent polls indicate that more than 80 percent of Colombians are opposed to it.

"For the FARC, political action is not just electoral... it is about winning hearts more than votes," said Jesus Santrich, a senior FARC supervisor in the peace process.

Voters narrowly rejected the peace deal in a referendum last year. Santos and the FARC tweaked it and the government pushed it through congress.

"The FARC will face a number of challenges. The first is not to betray their support base. The second is to enlarge their electorate," said Masse.

"The third is to show that they are capable of doing politics differently and not letting themselves get sucked into traditional patronage politics."

The Colombian conflict drew in various rebel forces, paramilitary groups and state forces over the decades.

It left some 260,000 people confirmed dead, 60,000 unaccounted for and seven million displaced.

The government has opened peace talks with the last active group, the 1,500-strong National Liberation Army, in the hope of sealing what Santos calls a "complete peace."

As part of the peace agreement, the FARC promised to use its assets to compensate victims.

Last Friday, it said it had handed over to UN monitors its assets valued at some $325 million overall, including land and livestock.

The congress in Bogota runs until Thursday. On Friday, the party plans an official launch ceremony.