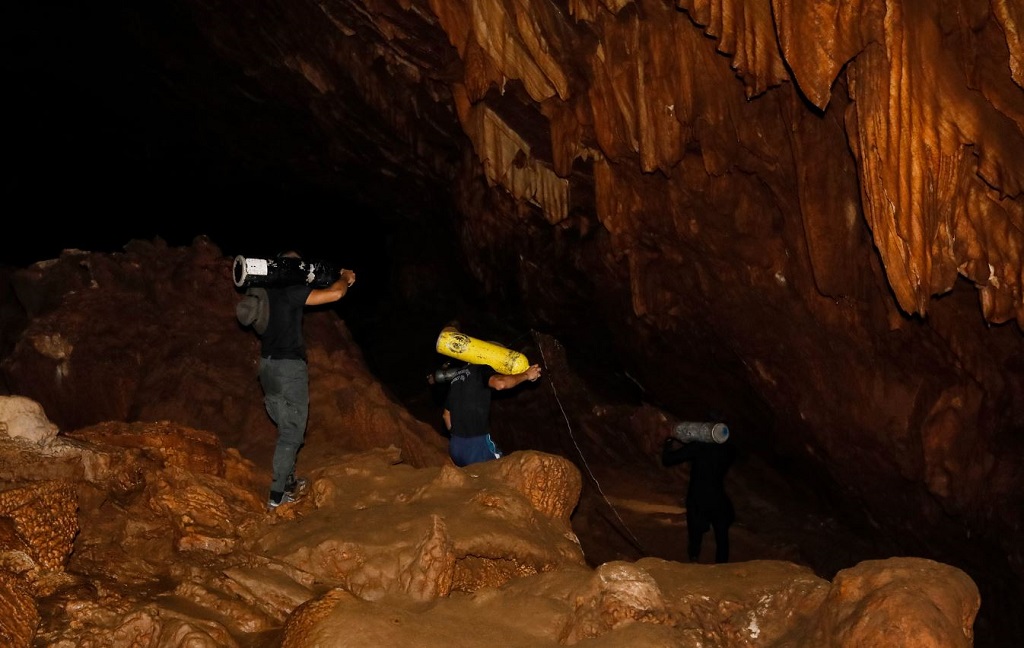 Thai rescue personnel carry oxygen tanks inside Tham Luang cave to conduct operations to find the missing members of the children's football team along with their coach at the cave in Khun Nam Nang Non Forest Park in Chiang Rai province on June 26, 2018.

MAE SAI, Thailand – Rescue divers reached several kilometres inside a flooded cave Saturday where 12 boys and their football coach have been trapped for a week, offering a flicker of hope for the harrowing search.

There has been no contact with the boys, aged 11 to 16, and their coach since they went into the Tham Luang cave last weekend and were hemmed in by heavy rains that blocked the entrance.

The desperate, round-the-clock search for the team has been beset by torrential downpours that submerged tunnels near the entrance, blocking divers from going in.

But Navy SEAL divers reached a T-junction in the depths of the cave just two or three kilometres (one to two miles) from where the boys are believed to be, Chiang Rai governor Narongsak Osottanakorn said.

Divers reached the same spot earlier in the week but were forced back by rushing floodwaters. This time, divers planted bottles of oxygen along the tunnel walls so swimmers navigating the muddy pools with almost no visibility could stay under for longer.

Water levels inside the complex labyrinth of tunnels finally dropped thanks to dozens of pumps set up to drain the floods even as heavy rain continued to pound the area near the Myanmar and Laos borders.

"The situation is better today than yesterday and the day before. Water has receded considerably and we are pumping out water in all chambers (near the entrance)," Narongsak told reporters.

As the search for the boys hit its seventh day, attention turned to their chances of survival inside the cave with little or no food and light.

The group likely has access to fresh water -- either dripping in through rocks or rushing in through the entrance -- but experts warned that runoff water from nearby farms could carry dangerous chemicals or bacteria.

"If they drink the water in the caves and it makes them sick it could hasten the problem that they are in, but if they don&39;t drink it then they are also in trouble," Anmar Mirza, coordinator of the US National Cave Rescue Commission, told AFP.

But even without food he said young, athletic boys could "easily live for a month or a month and a half" with the main challenge their mental resolve.

"The biggest issue that they are facing right now if they are alive is psychological because they don&39;t know at what point they might get rescued," Mirza said by phone from the US state of Indiana.