'So many funerals, it's my job, but my heart doesn't feel good': pastor 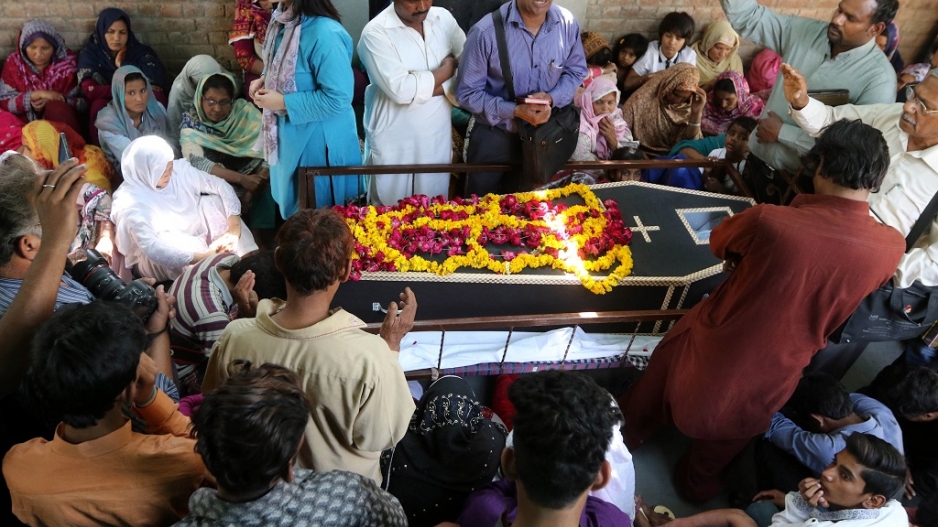 Pakistani Christians mourners attend the funeral of a victim of the March 27 suicide bombing, in Lahore on 28 March 28, 2016.

LAHORE - Shakeel Anjum spent Easter Monday burying six victims of the butchery in Pakistan&39;s city of Lahore and says he is in pain, his head is aching. He wonders: How much further will this go? How many more bodies will he lay to rest?

The pastor&39;s voice is heavy after presiding over service after service for Christian victims of Sunday&39;s carnage, when a suicide bomber blew himself up in a park crowded with families enjoying the warm Easter evening.

The blast sent ball bearings ripping through children and killed 72 people while wounding scores more. The Pakistani Taliban faction that claimed the attack said it had targeted Christians.

The six people that Anjum buried lived within the same two blocks of Lahore&39;s Youhanabad area, he told AFP, clutching a black-covered Bible in his hands.

"We are such a loving community in the country of Pakistan," he said, referring to the country&39;s Christian minority, which is believed to make up about 1.6 percent of the estimated population of 200 million.

Christians are frequently the target of militant attacks in Pakistan, including a double suicide bombing that killed 82 people at a church service in Pakistan&39;s northwestern city of Peshawar in 2013 and church attacks in Lahore in 2015 that killed 17.

They also often face discrimination at work and routinely fall victim to the blasphemy laws, which rights groups say are often used to wage personal vendettas.

"We need much consolation," Anjum, pastor of the Children&39;s Chapel in Youhanabad, said. "We have become tired, we are worried, have become scared.

"See, we pray that this country should remain safe forever. We are Pakistanis, we love Pakistan."

Christians were hurt in Sunday&39;s attack because it took place on Easter -- but there were also Muslim victims, he says. "Our Muslim brothers ... those families are crying too.

"We are all being hit by this, Christians and Muslims also."

My heart is with the people of Lahore. Senseless violence perpetrated against anyone anywhere in the world deserves our united condemnation

Among those he buried was Mutahir Javed, who was in his 20s.

"I tried to pump my son&39;s chest and give him CPR but he was no more. He died right in front of me," Mutahir&39;s father, Javed Bashir, said as relatives wail around him.

Anjum also buried Salamat Masih, also in his 20s, whose mother had to be restrained by other women in her grief.

"My son, my son, nobody should lose their sons," she sobbed.

When you become a pastor, he said, you don&39;t think about funerals. You think about the Bible and taking its message to the world -- life, not death.