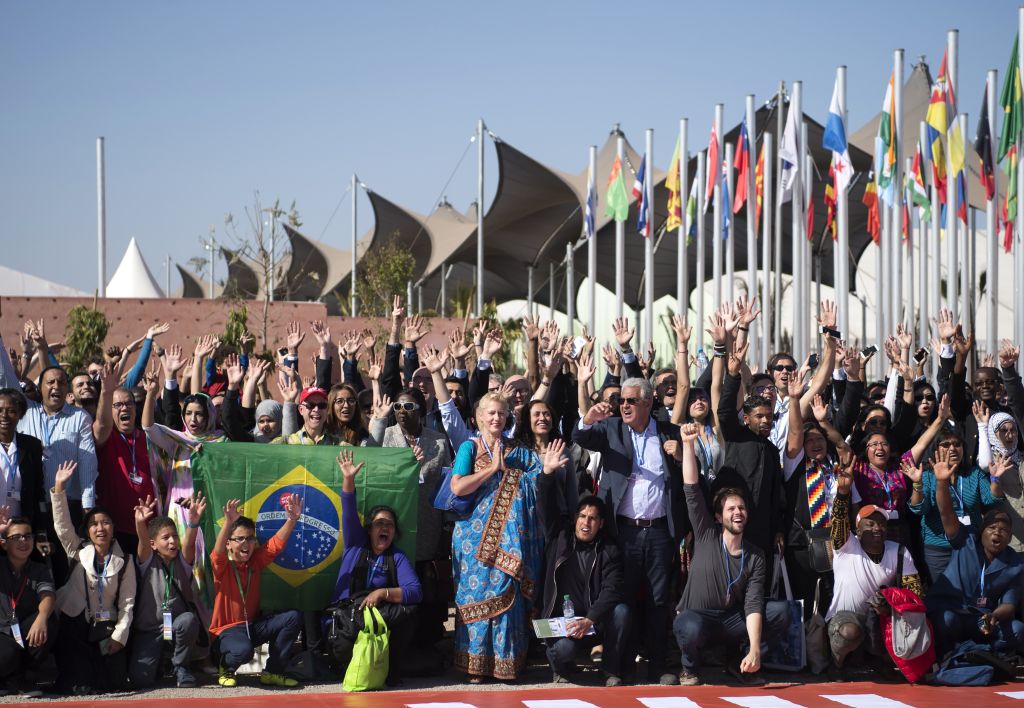 Members of International delegations pose for a group photo outside the COP22 climate conference on November 18, 2016, in Marrakesh.

MARRAKESH, Morocco - From across the Atlantic, Donald Trump eclipsed a UN conference which fought valiantly in Marrakesh to preserve momentum on curtailing climate change amid fears the mogul will fragment the global effort and starve it of cash.

World leaders, CEOs, negotiators and activists at the two-week meeting, which closed Friday, were clearly unsettled by the pending White House takeover of Trump, who has vowed to withdraw the US from a hard-won global agreement on climate change.

Analysts say a US exit would make it harder to achieve the 196-nation pact's goals to limit planet warming, and likely result in a shortfall of billions of dollars promised to help developing countries fight against climate change and cope with its impacts.

"The biggest impact, I think, is on financing... the US federal government's commitment to continue to finance clean energy," Alden Meyer of the Union of Concerned Scientists told AFP.

"The thing that people seem to be most concerned about is: will the US fulfil the remaining $2.5-billion of the $3-billion pledge President Obama made to the Green Climate Fund (GCF)?"

The fund supports projects to make the shift away from greenhouse gas-emitting fossil fuels to renewable sources.

Trump, who has described climate change as a "hoax", remained mum for the duration of the conference on whether he will execute his pre-election threats.

Amid the uncertainty, delegates to the 22nd UN climate conference put on a brave face.

Heads of state and cabinet ministers attending a "high-level segment" from Tuesday to Thursday this week reaffirmed their countries' determination to push ahead, with or without Washington.

But no-one could ignore the elephant in the room.

"The process has taken a huge hit following the US election results," said climate activist Mohamed Adow of Christian Aid, which represents the interests of poor countries at the UN negotiations.

"There is a lot of uncertainty about what's going to happen next."

Trump's election has recalled the shock of 2001, when George W Bush refused to ratify the Paris Agreement's predecessor, the Kyoto Protocol.

His action was a major blow to the global effort to rein in planet warming that scientists warn threaten the human way of life.

Washington was instrumental in negotiating the structure and contents of both agreements, striking tough bargains which made for often combative negotiations.

Many fear that after years of trust-building, a US retreat may revive old enmities between rich and developing nations at the UN process, possibly unleashing more withdrawals.

"Certainly, it could embolden some of the least progressive actors," said climate diplomacy expert Liz Gallagher of the E3G think-tank.

A handful of countries, including major emitters India and Saudi Arabia, needed serious convincing to get on board with the Paris Agreement.

Finance for climate aid is a particularly hot-button issue, with developing nations putting pressure on rich countries to ramp up contributions and deliver on what they have promised.

The US provided $2.7-billion in international climate finance in 2014, according to the Washington-based World Resources Institute.

It pledged last year to double finance for developing country adaptation projects -- from $400-million in 2014 -- for shoring up defences against climate change harms.

Of the $3-billion pledged for the GCF, $500-million has been delivered so far.

Washington also pays a big chunk of the operating budget of the UN climate body, under whose umbrella the Paris Agreement was negotiated.

If the US does not achieve it's own pledge of cutting emissions by 26-28 percent from 2005 levels by 2025, the collective goal will move further out of reach.

"We knew before the election that it was going to take additional actions by the next administration to meet the target," said Meyer.

"It's not very likely in my mind that Mr Trump would take additional actions."

A picture's worth 1,000 words. Some of the artwork on display at #COP22 by @NatGeo #1o5C #ParisAgreement #Marrakech pic.twitter.com/wTWOBC5x4D

All agree that if Trump acts on his threat, states, cities and businesses in the US and elsewhere will have to pick up the slack.

On Wednesday, more than 360 major companies called in an open letter for a "continuation of low-carbon policies" and investment in a renewable energy economy.

And representatives from the states of Vermont, Washington State and California -- the 7th largest economy in the world -- stressed they were committed to renewables for the long haul.

"As states we are doing the job," said Deborah Markowitz of the Vermont Agency of Natural Resources.

Many in Marrakesh stressed that market forces, not politics, may be what ultimately guarantees a low-carbon future.

"If in the worst case the United States were to withdraw its leadership, the biggest losers will be the people of the United States," Erik Sondheim, executive director of the UN Environment Programme, told AFP.

"All those new, remarkable fascinating jobs will go to other places."