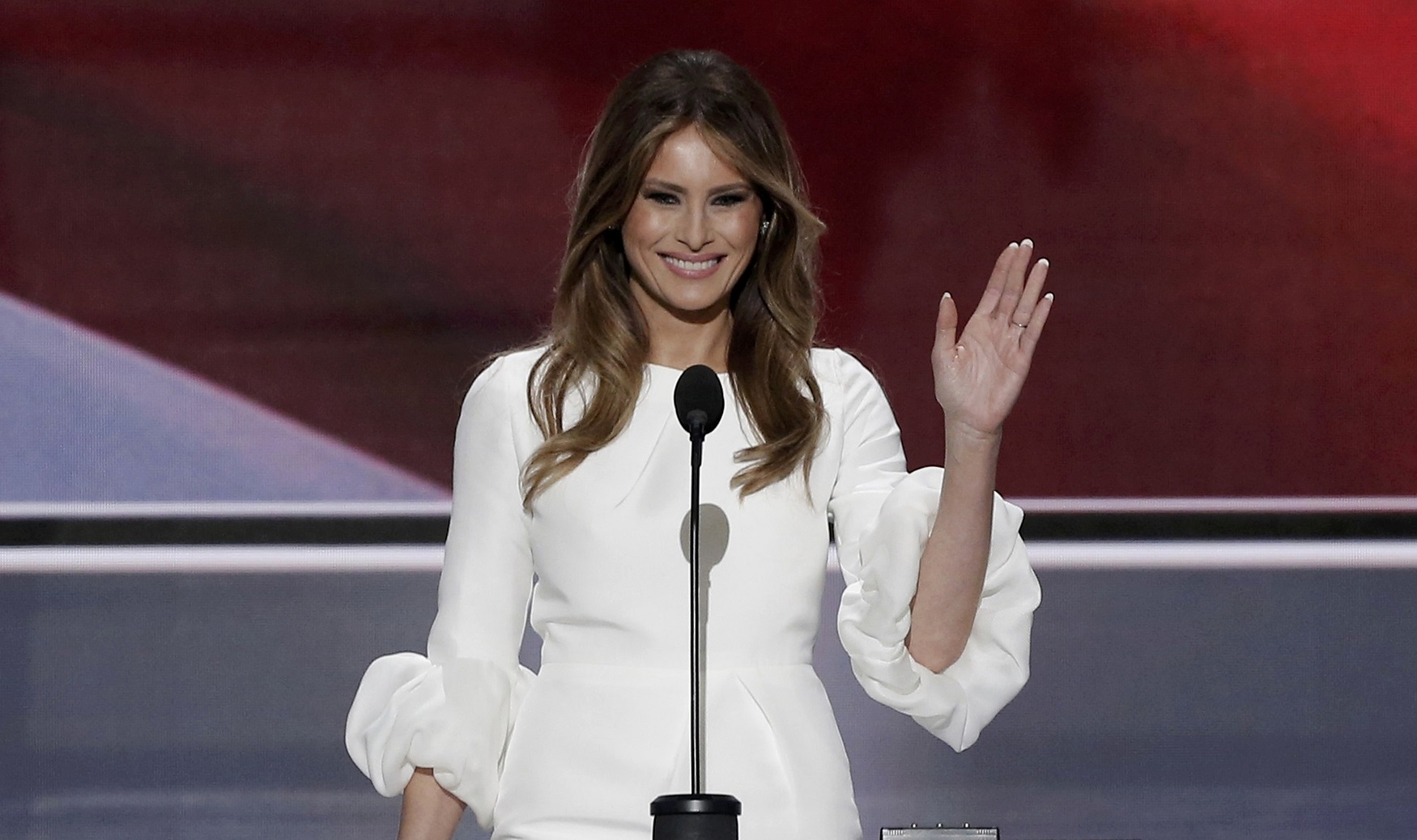 File: US First Lady Melania Trump renewed her campaign to tackle cyberbullying on Monday, as her husband lit up the internet with a stream of invective against his perceived foes.

CLEVELAND – The first political speech by Donald Trump’s wife, Melania, had a familiar tone. It was similar to that of Michelle Obama at the 2008 Democratic National Convention when she campaigned for her husband, Barack.

She portrayed her husband as a talented, compassionate and unrelenting leader who would unify rather than divide the country if elected to the White House.

I taught speech for ten years. Even my worst students would not have done this: https://t.co/QhPPC8ENUA pic.twitter.com/co5VveF5cq

The Slovenian-born jewellery designer and former model spoke to a cheering crowd at the Republican National Convention in Cleveland after a one-minute introduction from Trump.

The presumptive Republican nominee made a dramatic entrance, silhouetted in a white background and to the accompaniment of Queen&39;s 1977 rock anthem We Are the Champions.

"I have been with Donald for 18 years and I have been aware of his love for this country since we first met," the aspiring first lady told the convention.

"Donald wants prosperity for all Americans," she said, reading from a teleprompter, as people applauded.

Her comments were an attempt to soften the image of the New York businessman-turned-politician, who has been accused of bigotry and callousness for his calls to suspend Muslim immigration and deport millions of undocumented immigrants if elected.

He has also been criticised for insults directed at women, political opponents and journalists.

Trump&39;s Democratic rival, Hillary Clinton, accuses Trump, 70, of lacking the experience and temperament needed to work in the Oval Office.

On Monday, Clinton, 68, used an address to a largely black audience to cast Trump as someone who would divide the country along racial, ethnic and religious lines.

The Republican convention&39;s opening night featured a string of emotional speakers attacking Clinton&39;s record as secretary of state under President Barack Obama, many arguing she had made Americans vulnerable to Islamist militancy.

"I blame Hillary Clinton personally for the death of my son," said Pat Smith, the mother of an information management officer who was one of the four Americans killed in an attack on a US mission in Benghazi, Libya, in 2012.

Former New York Mayor Rudy Giuliani, whose administration has been credited with sharply reducing crime in the city during the 1990s and who oversaw the city&39;s response to the September 11 200, attacks that destroyed the World Trade Center and killed almost 3,000 people, gave a highly charged speech slamming Clinton and making the case for Trump.

"What I did for New York, Donald Trump will do for America!" he said.

The convention erupted in chaos earlier in the day when Trump opponents inside his party stormed out of the room and others chanted in a failed attempt to force a vote opposing his candidacy.

The turmoil threatened efforts by the Trump campaign to show the party had united behind him and distracted from the day&39;s theme of "Make America Safe Again".

The anti-Trump forces wanted to change the party&39;s nominating rules to allow delegates to support alternative Republican candidates over Trump.

Party leaders held a voice vote, then declared the opponents lacked enough support, triggering pandemonium on the floor of the Cleveland basketball arena where Trump is due to be formally nominated this week for the 8 November election.

"This entire system is rigged to force the vote for Donald Trump," said Kendal Unruh, a delegate from Colorado.

Trump&39;s son and adviser, Donald Trump Jr, threatened the leaders of the attempted revolt, saying: "Your careers are finished" in a message posted on Twitter.

While delivering a jolt to the highly scripted programme, the rebellion by the anti-Trump forces was quashed.

But the furore, an embarrassment to Trump, put a spotlight on the deep divisions within the party that have emerged over his candidacy.

A string of senior Republicans, worried about Trump&39;s temperament and policies, were already avoiding the convention.

The gathering opened on Monday afternoon in the shadow of racially tinged killings of police officers and black men, and as protesters for and against Trump faced off in a plaza a few blocks from the convention, shouting slogans at each other, separated by a wall of police.

Sunday&39;s shooting of three policemen in Baton Rouge, Louisiana - a targeted attack that may have been in retaliation for a series of police killings of black Americans - hung over the gathering.

Trump lashed out at Obama early on Monday over the shootings, saying the Democratic president "doesn&39;t have a clue".

The Baton Rouge shootings happened nearly two weeks after police fatally shot a black man there, and after another such death near St Paul, Minnesota, both of which sparked nationwide protests.

Five policemen were also killed in an ambush in Dallas this month.

Trump has sought to position himself as the law-and-order candidate in an echo of Republican Richard Nixon&39;s successful presidential campaign of 1968.