Don't cry for me Catalonia 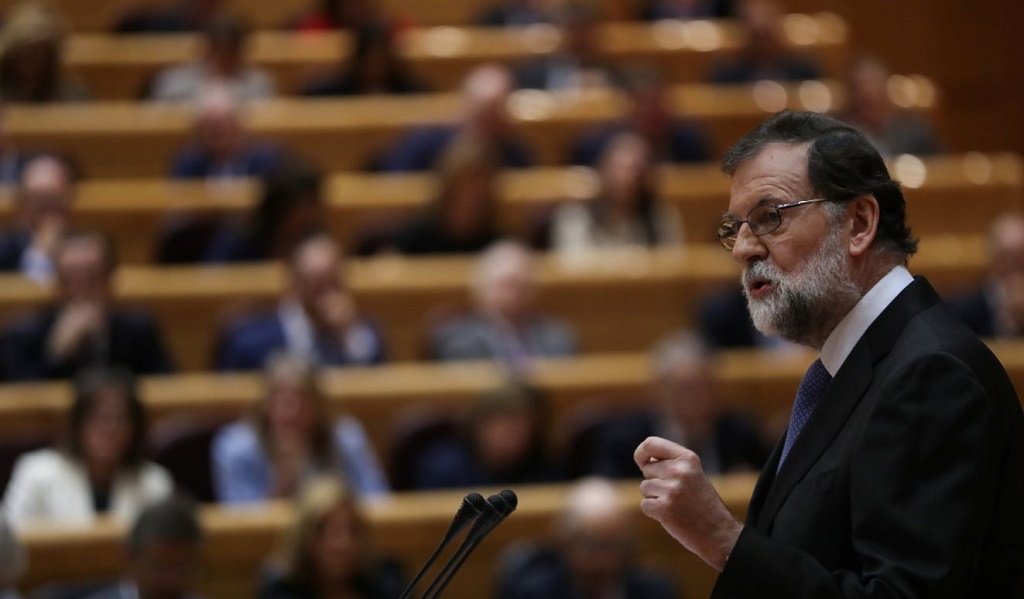 Spain's Prime Minister Mariano Rajoy delivers his speech during a debate at the upper house Senate in Madrid, Spain, October 27, 2017.

MADRID - Spanish senators met Friday to adopt drastic measures to impose direct rule on rebel region Catalonia in a bid to frustrate its drive to break away, though separatists may push back with an independence declaration.

The senate, where Prime Minister Mariano Rajoy&39;s Popular Party holds a majority, is scheduled to vote on steps to depose Catalonia&39;s secessionist government before the week is out, after the region held an unlawful independence referendum on October 1.

For its part, the Catalan parliament, where pro-secession parties hold sway, will meet in Barcelona where a proposal to vote on splitting from Spain could work its way onto the floor.

On Thursday, Catalan leader Carles Puigdemont opted not to call elections for a new regional parliament - thought to be the only way to stave off Madrid&39;s imminent power grab.

Warning that seizure of control by the central government would escalate the crisis, he passed the buck to the regional parliament "to determine the consequences" of the threatened takeover - thus leaving the door open for a possible independence push.

Spain and Catalonia have been locked in a constitutional standoff since a "Yes" vote in the unregulated plebiscite which secessionist leaders hold up as a popular mandate for independence for the region of 7.5 million people.

Only about 43 percent of voters turned out, however, with many anti-secessionists staying away and others prevented from casting their ballot by Spanish police in a crackdown that turned violent.

Based on the vote, Puigdemont moved towards an independence declaration, but suspended it pending negotiations.

Madrid turned to Article 155 of the constitution - a never-before-used provision designed to rein in rebels among Spain&39;s 17 regions, which enjoy varying levels of autonomy.

Measures drawn up under the article are set to enter into force on Saturday, and will see the central government seek to temporarily take over Catalonia&39;s civil service, police, purse, and public broadcaster.

Deputy Prime Minister Soraya Saenz de Santamaria insisted the government was "fulfilling a legal obligation, a democratic obligation and a political obligation," by its actions.

But the move is likely to anger Catalans, fiercely protective of their autonomy, even if divided on independence.

Independence supporters are ready to push back and protest against the takeover.

Albert Botran, a regional lawmaker for the far-left CUP party that backs Puigdemont and wants to split from Spain, vowed on Friday to "make it difficult for the new, illegitimate government to get away with it."

"The first action will be resistance," he told Catalonia Radio.

Catalonia&39;s parliament met to discuss the issue late on Thursday, where opposition lawmakers pleaded with Puigdemont to find a solution to the standoff closely watched by a European Union nervous wary of nationalist and secessionist sentiment, particularly after Britain&39;s dramatic decision to leave the bloc.

"You still have time to return to legality and call elections," Ines Arrimadas, regional leader of the anti-independence Ciudadanos party, said in parliament.

READ: Catalonia on uncertain footing as elections ruled out

Catalans are fiercely protective of their language, culture and autonomy - restored after the 1939-75 dictatorship of Francisco Franco.

"We&39;re impatient to see the proclamation of the Catalan republic," said Natalia Torres, 19, one of thousands of students at a pro-independence march in Barcelona on Thursday.

But Manuel Herrera, a 61-year-old parking attendant, said: "I want to stay in Spain so that more companies don&39;t leave."

Fears for Catalonia&39;s economy have increased as uncertainty persists over the independence drive, with some 1,600 companies having moved their legal headquarters out of the region in recent weeks.

Catalonia accounts for about 16 percent of Spain&39;s population and a fifth of its economic output.