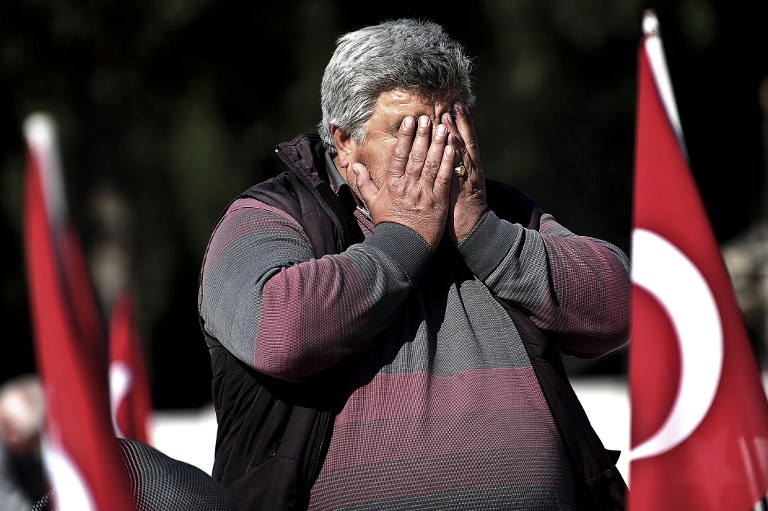 A man reacts as he mourns in front of the tomb of his son, a miner who was killed in the worst industrial accident in Turkey's history in Manisa on April 12, 2015.

Of the forty-five people standing trial, eight are former top managers from the Soma Komur group that ran the mine who are charged with murder and face sentences of 25 years in prison for each of the 301 fatalities last year.

But the trial was almost immediately adjourned after lawyers for the victims argued that the eight -- who were to give evidence via video-link for their own security -- had to appear in person in the courthouse.

Following angry scenes, the judge agreed and the case was adjourned until Wednesday.

The eight former managers, who are in detention in Izmir, had been seen on a large screen in the court sitting on benches surrounded by police at their prison.

The trial, which is expected to be lengthy, is being heard around 50 kilometres (30 miles) from Soma in western Turkey by a court in the town of Akhisar.

With hundreds of police deployed to prevent clashes outside, 200 parents of the victims arrived at the courthouse with an immense banner with the names of every single one of the 301 dead miners.

Some grieving relatives touched the names of victims with their hands, hunching over the banner with emotion.

"My brother died at Soma and I lost 301 brothers at that mine," said Murat Aybak, himself a former miner.

"I want all those who are responsible, all those who gave the orders for them to work like that to be punished for their mistakes."

Hundreds of relatives of the victims and lawyers crammed into the courthouse, a building usually used as a cultural centre turned into a court to accommodate the scale of the trial.

"We want justice!" they yelled at the justice, prompting the security forces to enter the court.

The accident on May 13, 2014 raised new concerns about Turkey&39;s dire industrial safety record and exposed the lacklustre reaction of the government led by Recep Tayyip Erdogan, now president but then premier.

Erdogan had notoriously appeared to play down the disaster, saying that "accidents are in the nature of the business" and comparing it to accidents in Industrial Revolution-era Britain.

The tragedy sparked protests that rattled the government a year after the mass anti-government rallies in Istanbul and elsewhere, with an advisor to Erdogan raising tensions by kicking a protestor in Soma in an incident caught on camera.

The disaster happened when one of the pits of the Soma mine became engulfed by flames and carbon monoxide gas, trapping a team of some 800 miners working inside.

A report after the disaster found a long list of faults at the mine, including a lack of carbon monoxide detectors, gas masks in poor condition and bad ventilation.

Lawyers for the families of the victims say that the owners of the Soma mine had sought over-exploitation for the sake of profit, resulting in "working conditions worthy of slavery".

Representatives of the victims have also argued that the scope of the trial should be even wider, accusing the government of repeatedly turning a blind eye to shortcomings at the mine.

The eight top managers from Soma Komur on trial, including chief executive Can Gurkan and general manager Ramazan Dogru, have been charged by prosecutors with murder in an unusual move for an industrial accident trial.

Other company officials have been charged with homicide by conscious negligence or reckless homicide, and also face lengthy jail terms.

A month after the disaster, the government pushed through parliament a law aimed at improving Turkey&39;s standards of labour safety.

But Turkey was hit by a new mining disaster in October 2014 when 18 miners where killed after floodwaters engulfed their mine in the southern region of Karaman.