Ecuador's jailed VP to be stripped of office 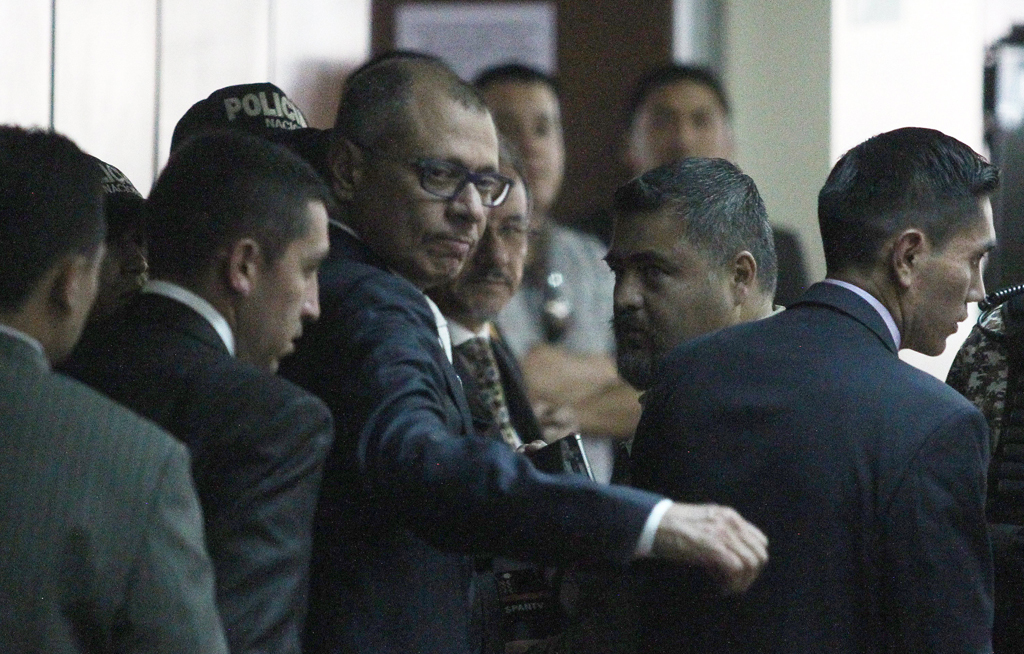 Ecuadorean Vice President Jorge Glas reacts as he arrives to court, to attend his trial on bribery from Brazilian construction company Odebrecht, in Quito, Ecuador, December 13, 2017.

QUITO, Ecuador - Ecuador&39;s Vice President Jorge Glas was to constitutionally lose his title late Tuesday because he has been absent for more than three months -- locked up in prison on a six-year sentence for corruption.

Glas, 48, is the highest-ranking Latin American politician to be convicted and imprisoned for his role in a continent-wide scandal involving a Brazilian construction group, Odebrecht, which gave bribes to secure public works contracts.

He was given his six-year sentence on December 13 by Ecuador&39;s Supreme Court after being found guilty of receiving $13.5 million in Odebrecht kickbacks. He says he is innocent and will appeal.

But, taking into account his detention since October 2 pending his trial, he has not been able to carry out his duties.

That means that at midnight Tuesday (0500 GMT Wednesday), Glas will have failed to execute his functions as vice president for the three months allowed under the constitution, automatically losing his post.

Asked if that was right, the executive secretary of the ruling Country Alliance, Ricardo Zambrano, said: "Of course."

Zambrano added, in comments to the Ecuavisa television network, that President Lenin Moreno would have to ask Congress to choose a replacement.

The legislature on December 17 had voted to open proceedings to fire Glas. But that still required rulings from the Constitutional Court and a congressional panel before going to a vote before the entire Congress.

It appeared the constitution&39;s provisions would come into effect before that process ran its course.

"Under the law, the three months of absence means that a temporary deficiency (of vice-presidential functions) becomes a definitive one, without the need for any congressional declaration," a constitutional expert, Rafael Oyarte, told AFP.

Ecuador&39;s ruling party is split between Moreno and previous president Rafael Correa. Glas was an ally of Correa, who retired to Belgium but returned to his country in late November to battle Moreno for control of their party.

Odebrecht, which was investigated by the US Justice Department, agreed to pay a $3.5 billion fine after admitting to giving $788 million in bribes across 12 countries to secure contracts.

The scandal has ensnared politicians in several countries, including Mexico, Peru, Panama and Venezuela.

Ecuadoran prosecutors said Odebrecht spent $47.3 million in bribes in their country to get public contracts.