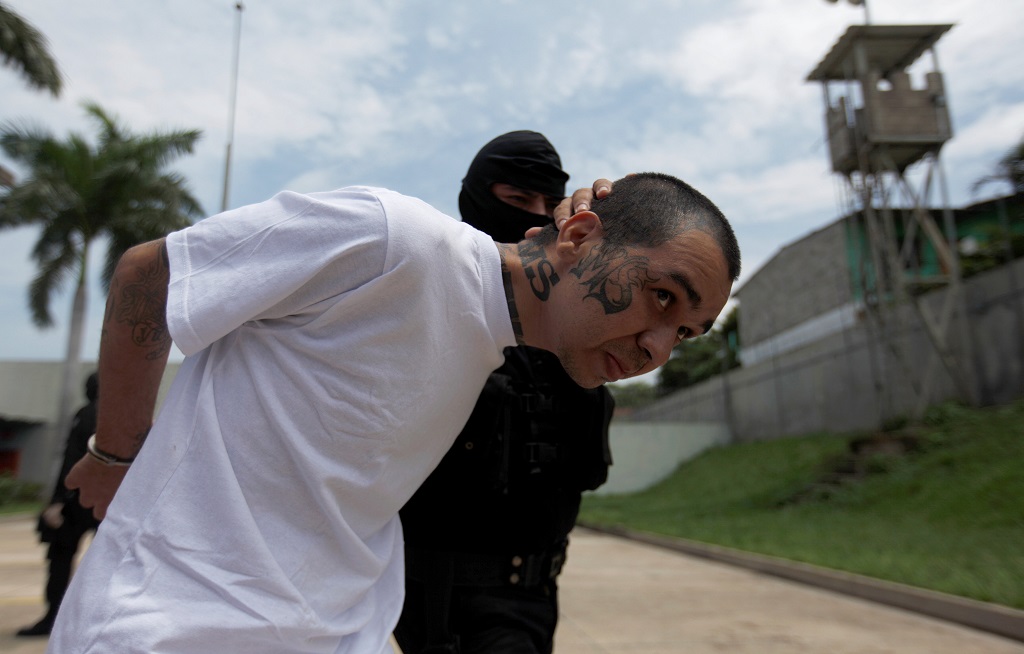 A Mara Salvatrucha (MS-13) gang member is escorted upon their arrival at the maximum-security jail in Zacatecoluca, El Salvador, June 22, 2017.

SAN SALVADOR – A court in El Salvador on Wednesday sentenced seven members of a notorious criminal gang to 390 years in prison each for their part in a March 2016 massacre that shocked the crime-ravaged Central American country.

The men, part of the "Barrio 18 Revolutionaries" gang, received a 35-year prison sentence for each of the 11 victims killed in the massacre, plus five years for their affiliations with illegal gangs, the attorney general's office said on Twitter.

Authorities have said the gang members early last year kidnapped and killed three day laborers and eight workers of an electric company in the quiet town of San Juan Opico, some 27 miles northeast of the capital San Salvador.

MS-13 gang members languish in one of the three “'gang cages” in the Quezaltepeque police station in 2013 in San Salvador Giles Clarke/Getty pic.twitter.com/Lhj1hhxq85

Defense attorney Carlos Mejia said he would seek an appeal because a key witness had not been sworn in.

El Salvador ranks among the world's most murderous countries, with criminal gangs fighting over territory and threatening intruders with death.

Read: At the mercy of gangs

Violence has surged since a 2012 truce between two Barrio 18 and its rival Mara Salvatrucha (MS-13) began to unravel in 2014. Barrio 18 Revolutionaries is a faction that broke off from Barrio 18 and now operates separately.

The longest prison sentence in El Salvador was given to a member of Mara Salvatrucha in 2014, when he was ordered to spend 730 years behind bars for convictions that included 15 homicides.