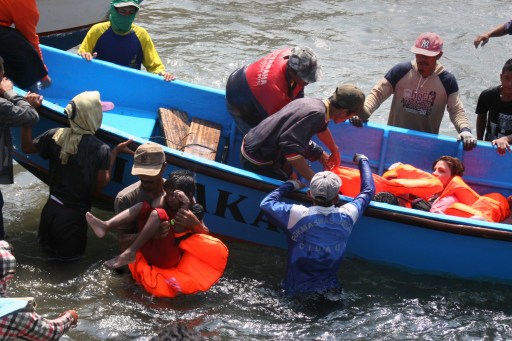 Rescuers assist survivors arriving on fishing boat at the wharf of Cidaun, West Java on July 24, 2013 after an Australia-bound boat carrying asylum-seekers sank off the Indonesian coast.

BRUSSELS, Belgium - EU nations granted refugee or protection status to 710,400 people last year, of whom more than half were Syrian, the bloc's statistical agency said on Wednesday.

The figure was "more than double the number of 2015," Eurostat said.

"The largest group of beneficiaries of protection status in the EU in 2016 remained citizens of Syria (405,600 persons or 57 percent of the total number of persons granted protection status," it said.

Germany had initially waived the so-called Dublin rules, in which asylum-seekers are meant to be sent back to the first European country they registered in, for Syrian refugees at the height of the migrant influx in 2015.

But after the arrival of around one million people, public misgivings grew, forcing Chancellor Angela Merkel to take steps to limit the arrivals.

Eurostat said 55 percent of the 710,400 people granted refugee status, 37 percent were given subsidiary protection -- meaning they would not be sent back home as there was a risk of harm there -- and eight percent were allowed to stay on for humanitarian reasons.

It said more than 1.2 million asylum requests were received by EU countries last year, a number close to the record applications made in 2015.