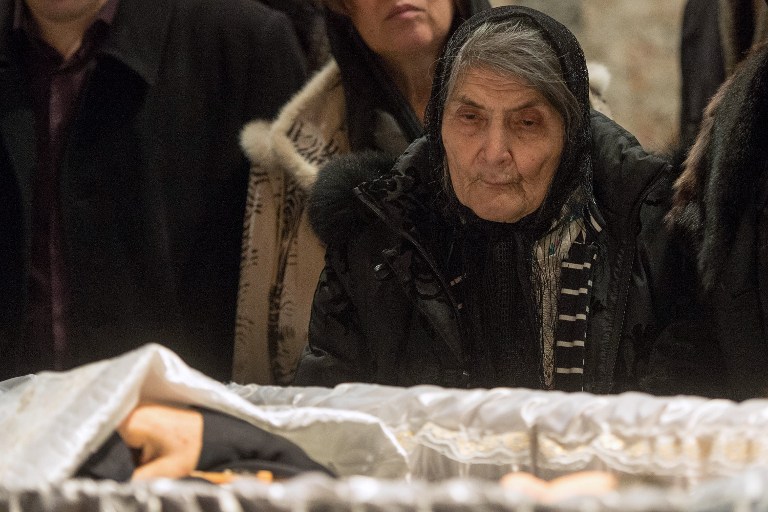 Dina Eidman, 87, the mother of murdered Russian opposition leader Boris Nemtsov, pays her respects near the coffin of Nemtsov during a farewell ceremony in Moscow on March 3 2015.

MOSCOW - Slain Russian opposition leader Boris Nemtsov was to be buried in Moscow on Tuesday, as some prominent European lawmakers said Russia prevented them from attending.

Many Western ambassadors were expected to attend the funeral ceremonies beginning at 10am (0700 GMT) in Moscow&39;s Sakharov Centre.

Nemtsov was gunned down late on Friday just outside the Kremlin&39;s walls.

The killer escaped unidentified, prompting opposition activists to accuse President Vladimir Putin of either ordering the killing or at least creating an atmosphere of political hatred that led to the crime.

At least two prominent European lawmakers said that Russia prevented them from attending.

Former Latvian Foreign Minister Sandra Kalniete, who is a deputy in the European Parliament, said that border guards barred her from entry at Moscow&39;s Sheremetyevo airport late Monday.

"Despite this decision of the Putin regime I want the relatives and friends of Boris Nemtsov and all Russian democrats to know that we .. are with them at this tragic moment," Kalniete said in a statement.

Bogdan Borusewicz, the president of the Polish Senate, said earlier in Warsaw that Russia authorities refused him a visa.

Speaking on Polish TV, the one-time rights activist accused Putin of steering Russia in the direction of a dictatorship.

The only foreign serving cabinet member to have announced his attendance was Lithuanian Foreign Minister Linas Linkevicius. The German government is expected to be represented by its Commissioner for Russia, Gernot Erler.

Putin&39;s spokesman Dmitry Peskov said on Monday the Russian president will not attend the funeral and is sending his representative in parliament, Garry Minkh, instead.

Russian investigators have said that they are looking into various motives for the murder, including a link to the conflict in Ukraine.

They confirmed Nemtsov&39;s girlfriend, the key witness who was walking home with him when he was gunned down, had returned to her native Ukraine.