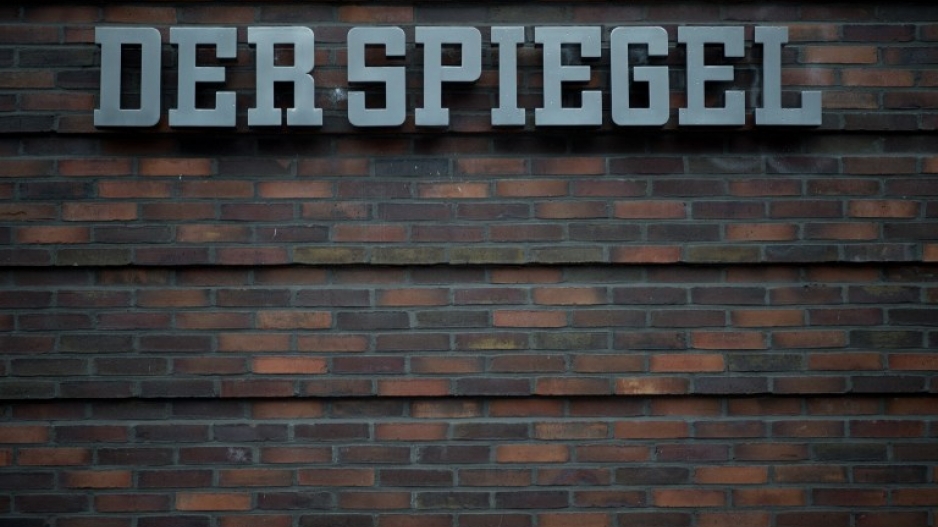 he logo of German publishing house "Der Spiegel" is pictured in November at the company's head office in Hamburg, northern Germany.

BRUSSELS - The European Union angrily demanded answers from the United States on Sunday over allegations Washington had bugged its offices, the latest spying claim attributed to fugitive leaker Edward Snowden.

The report in German weekly Der Spiegel is likely to further strain relations between the United States and Europe, shortly after they launched formal negotiations to create what would be the world&39;s biggest free trade area.

Der Spiegel said its report, which detailed covert surveillance by the US National Security Agency (NSA) on EU diplomatic missions, was based on confidential documents, some of which it had been able to consult via Snowden.

"We have immediately been in contact with the US authorities in Washington DC and in Brussels and have confronted them with the press reports, " the European Commission said in a statement.

"They have told us they are checking on the accuracy of the information released yesterday and will come back to us."

One document, dated September 2010 and classed as "strictly confidential", describes how the NSA kept tabs on the European Union&39;s mission in Washington, Der Spiegel said.

Microphones were installed in the building and the computer network infiltrated, giving the agency access to emails and internal documents.

The EU delegation at the United Nations was subject to similar surveillance, Der Spiegel said, adding that the spying also extended to the 27-member bloc&39;s Brussels headquarters.

It said the leaked documents referred to the Europeans as "targets", in intelligence activity reminiscent of the Cold War.

US Deputy National Security Advisor Ben Rhodes refused to be drawn into commenting directly on the allegations in a briefing in Johannesberg on Saturday, but said it was "worth noting" the US was "very close" to EU security services.

In another report on Sunday, Der Spiegel said leaked documents showed that the US secret services targeted Germany more than any other EU country.

Citing figures from NSA documents, the magazine said that half a billion forms of communication -- phone calls, emails, text messages and Internet chat entries -- were monitored in Germany every month.

The Spiegel reports are the latest in a series of allegations about US spying activity revealed by Snowden, a former NSA contractor who is holed up in a Moscow airport transit zone after the United States issued a warrant for his arrest and revoked his passport.

Speaking before the latest Spiegel revelations on Sunday, EU powerhouse Germany said the United States must quickly say whether the spying allegations were true or not.

"It&39;s beyond our imagination that our friends in the US consider the Europeans as enemies," Justice Minister Sabine Leutheusser-Schnarrenberger said in a statement.

"If the media reports are accurate, it is reminiscent of actions among enemies during the Cold War."

European Parliament president Martin Schulz said he was "deeply worried and shocked" by the claims.

"If the allegations prove to be true, it would be an extremely serious matter which will have a severe impact on EU-US relations," he said in a statement, demanding full and speedy clarification from the US authorities.

The US authorities issued an arrest warrant this month for Snowden after he revealed details of NSA&39;s so-called PRISM programme which collects and analyses information from Internet and phone users around the world, with access to data from Google, Yahoo! and other Internet firms.

US officials say the information gathered is vital in the fight against global terrorism but the scale of the programme raised deep concerns around the world.

In 2003, the EU announced it had found phone taps in the building targeting the offices of several countries, including Britain, France and Germany. It was not immediately clear if Der Spiegel was referring to this case.

Even before the most recent allegations, EU Justice Commissioner Viviane Reding wrote to US Attorney General Eric Holder earlier this month calling for answers about its Internet spy programme, saying: "Fundamentally, this is a question of trust."

Snowden himself remains in political limbo at Moscow&39;s Sheremetyevo airport after flying in from Hong Kong last week, unable to fly on without legal travel documents or exit the airport without a Russian visa.

Ecuador&39;s President Rafael Correa said that US Vice President Joe Biden had asked Quito to reject any asylum request from the 30-year-old who is wanted by the United States on charges including espionage.

But he said Snowden&39;s fate was in Russia&39;s hands as Quito could not process his asylum request until he was on Ecuadoran soil.

"We have not sought out this situation," said Correa, saying it was WikiLeaks founder Julian Assange who recommended he seek asylum in Ecuador.

Assange, who is wanted for questioning in Sweden on sexual assault allegations, took refuge at the Ecuadoran embassy in London a year ago to avoid Britain putting him on a plane to Stockholm.

French MEP Jean-Luc Melenchon said Sunday that France should grant Snowden asylum and called for a suspension of all trade negotiations with the United States.

Earlier this month, Brussels and Washington formally launched negotiations on a Free Trade Agreement which would add tens of billions of dollars to the EU and US economies.