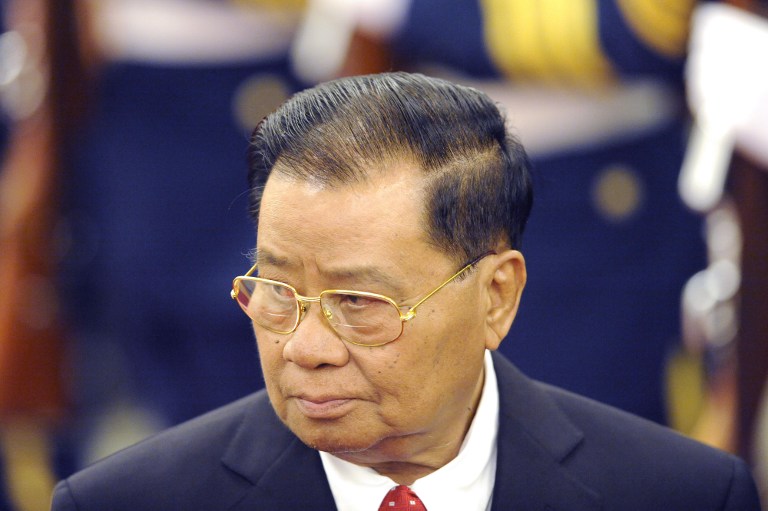 Myanmar's military junta leader, General Than Shwe reviews the Chinese People's Liberation Army honor guards during a welcoming ceremony at the Great Hall of the People on September 8, 2010.

YANGON, Myanmar - Myanmar&39;s feared former junta leader Than Shwe has endorsed his one-time nemesis Aung San Suu Kyi as a "future leader" of the country, according to his grandson.

Than Shwe, a postal clerk turned general who ran the country with an iron fist for nearly two decades until 2010, met with democracy champion Suu Kyi on Friday.

Her party is preparing for power after November&39;s massive election win.

The talks mark a dramatic turnaround in fortune for Suu Kyi, who was kept under house arrest for years by the 82-year-old retired general for leading the democracy movement against his army.

"Everyone has to accept the truth that Daw Aung San Suu Kyi will be the future leader of Myanmar after winning the elections," Than Shwe was quoted as saying on a Facebook post late Saturday by his grandson, Nay Shwe Thway Aung.

Daw is a term of respect.

"I will support her earnestly as much as I can if she really works for the development of the country," he added, according to the post.

Win Myint, a spokesman for Suu Kyi&39;s National League for Democracy (NLD) party, confirmed the Friday meeting, adding it was the first time the pair had met since 2003.

Suu Kyi, 70, is barred from the presidency by an army-scripted constitution, but has said she will govern from "above the president" when her party take their seats in the new year.

The NLD scooped up nearly 80 percent of contested seats in last month&39;s breakthrough election, a massive mandate to govern after half a century of military rule.

But the army still holds a strong hand. It retains 25 percent of all parliamentary seats as well as key bureaucratic posts.

The NLD leader has been at pains to urge reconciliation with the army as she eyes a smooth transition to power.

Suu Kyi met also with President Thein Sein and the powerful army chief last week in the capital Naypyidaw, with both men re-iterating their public commitment to help her new government.

The government has denied rumours that Than Shwe is guiding the pace of reforms from behind the scenes.

But analysts say the meeting between former junta leader and Suu Kyi is still a major indicator of a peaceful handover of power by a military that has marshalled reforms over the last four years.

Many NLD supporters remain cautious of a military that is renowned for its political chicanery and repressive reflexes.

The NLD won a similar share of the vote in 1990, only to see the army annul the result and tighten its grip on the country for another generation.