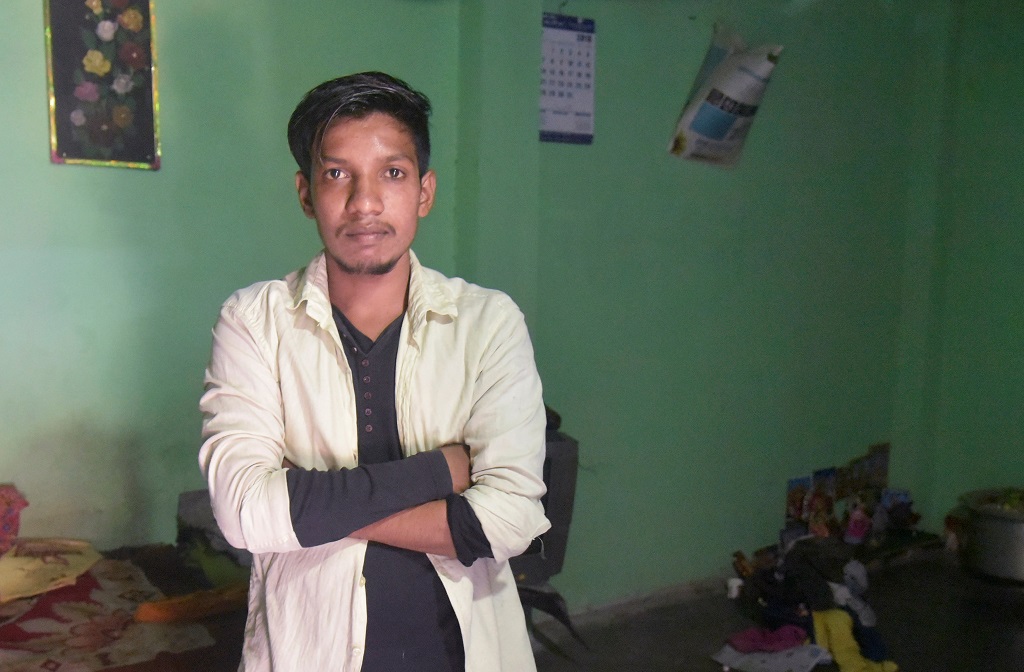 Satish Bhaykre, 21, who was beaten by a mob due to a fake WhatsApp text, poses inside his house on the outskirts of Nagpur, India, 23 June 2018.

AHMEDABAD - Indian police urged people Wednesday not to believe false rumours spread on WhatsApp after a woman was killed and a dozen hurt in the latest mob attacks to leave authorities looking powerless.

In the worst of the five assaults in the western state of Gujarat on Tuesday, a destitute woman, Shantadevi Nath, and three others were attacked by around 100 people in the main city Ahmedabad.

"Half a dozen people surrounded the women as they were about to board an auto-rickshaw and started questioning them. Soon the crowd swelled and pulled Shantadevi and her companions out of the rickshaw and started thrashing them," police official JA Rathwa told AFP.

"People in the crowd rained punches and kicked the four women. Some even hit them with sticks and pulled them by their hair."

The women were finally rescued by local traffic policemen and taken to hospital but Nath, 45, was declared dead on arrival.

The same viral message which sparked that incident, alleging that 300 people had descended on Gujarat looking to abduct and sell children, appears to have triggered four other mob attacks there the same day.

Six people were injured in two separate incidents in Rajkot, 225 kilometres (140 miles) from Ahmedabad, including a family of five visiting to discuss a relative&39;s marriage prospects.

In two assaults in Surat, 275 kilometres from Ahmedabad, five women were attacked by local villagers while a 45-year-old woman was assaulted after locals suspected she had kidnapped her toddler.

"It was a mostly male crowd which took away her daughter as they suspected her to be a kidnapper," a police officer told journalists.

"Both of them were brought to the police station where it became clear that she was indeed the child&39;s mother," the officer added.

Twenty-two people are believed to have perished in the past year, media reports say, because of the same or similar WhatsApp rumours in at least five Indian states.

"Guys please be on high alert," reads one such message quoted by media. "Three kids were kidnapped from my friend&39;s area this morning. There were 10 guys giving biscuits... Parents pls be on high alert."

Another video -- actually a Pakistani road safety video - which did the rounds is of a child apparently being snatched by two men on a motorbike.

The victims are usually outsiders. People have also been beaten to death on suspicion of stealing cattle.

Often videos of the attacks go viral on social media and are shown, albeit in pixellated form, on India&39;s many rolling TV channels - including, in one case, victims covered in blood and pleading for their lives.

The Gujarat incidents prompted police to issue a press release, urging people not to "get carried away by fake social media messages".

The rash of attacks has left the authorities scrambling to mount an effective response in a country where the use of smartphones and WhatsApp, the messaging service, is exploding, including in remote areas.

"Everyone uses WhatsApp and it is the best platform for spreading fake news. Internet data is dirt cheap (to download or send) and everyone in India has access to smartphones," Pankaj Jain from fact-checking organisation SMHoaxSlayer told AFP.

There has been no coordinated and centralised effort to counter the attacks, with authorities in several states taking largely localised initiatives.

In the southern state of Tamil Nadu local authorities used loudspeakers in May to warn people about false rumours. In Uttar Pradesh police have taken to WhatsApp themselves to disseminate short video messages.

Nikhil Pahwa, the editor of news and analysis website Medianama, told AFP the authorities must raise their game, including becoming savvier about tracking social media and responding quickly to false rumours.

But he also said the onus was on WhatsApp, in the Facebook-owned company&39;s biggest market, to ensure that the original sender of a message can be identified and to help authorities communicate more with citizens.

"We have all kinds of messages circulating on the social media. Misinformation today is a global issue and there is no one way to address it. Multiple things need to be done," Pahwa said.