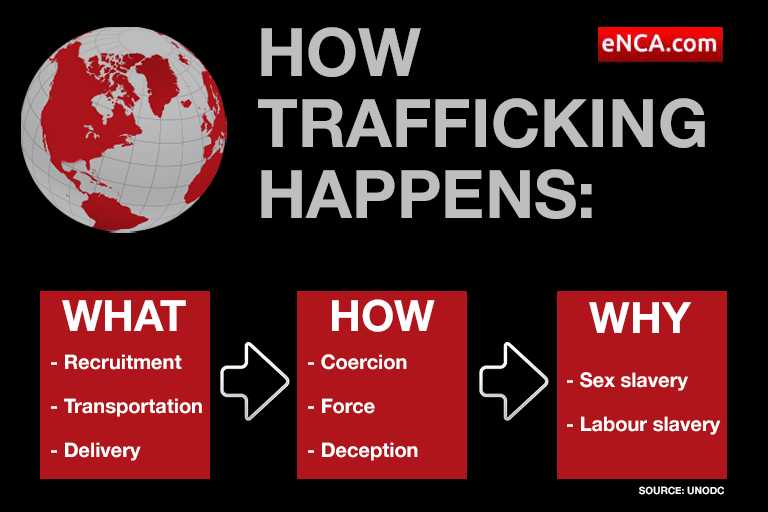 Human trafficking is made up of three elements: the act, the means and the purpose.

What is Human Trafficking?

Human Trafficking is defined in the Trafficking Protocol as "the recruitment, transport, transfer, harbouring or receipt of a person by such means as threat or use of force or other forms of coercion, of abduction, of fraud or deception for the purpose of exploitation."

Who is vulnerable to trafficking?

Although anyone can fall victim to human trafficking; minorities, displaced persons and other marginalised groups are most vulnerable to human trafficking. Impoverished populations and victims of violence and homelessness are also at high risk. Traffickers often take advantage of these people’s vulnerabilities and unmet needs.

According to the UNODC a third of trafficking victims are children and over half of all victims are female.

Traffickers can be any age, gender, ethnicity or nationality. But the UNODC 2014 report states that 72% of people convicted of human trafficking are male. In many cases traffickers are related to or are close acquaintances of those they are exploiting.

How much money is made from human trafficking?

The International Labour Organisation estimates that globally, a staggering R1.9 trillion is generated from illegal human trafficking each year. Two-thirds of this profit is derived from sexual exploitation and the remaining third from forced labour.

Click here for the eNCA feature The Human Trade