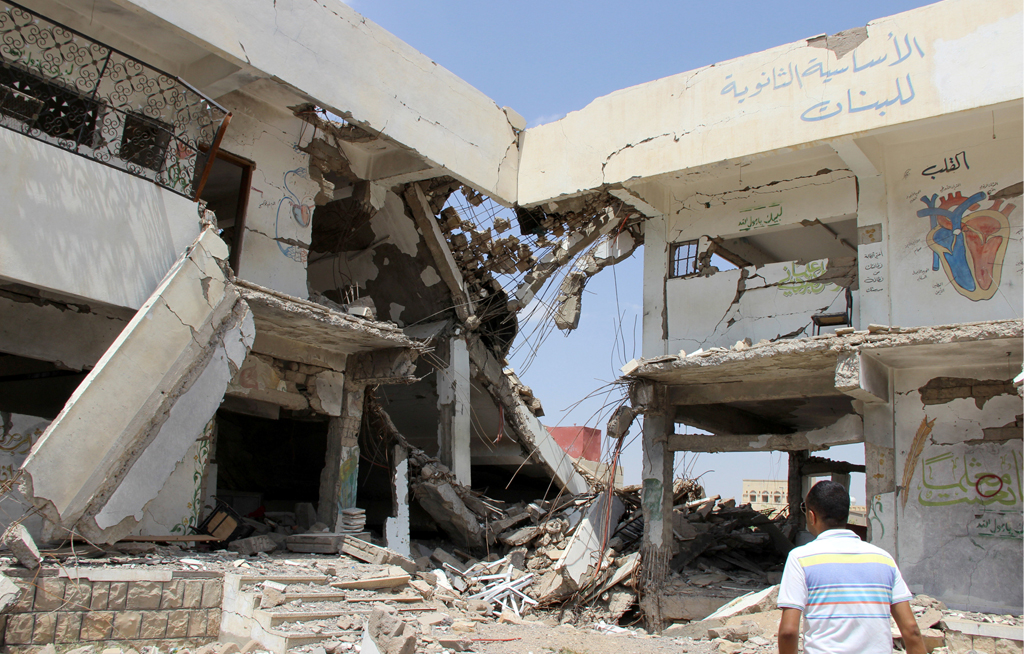 Man looks at a damaged school after it was hit by a Saudi-led air strike in the northwestern city of Saada, Yemen.

SANAA - An air strike by the Saudi-led coalition near a school in rebel-held northern Yemen on Tuesday killed five people including two children, a medical and local official said.

Thirteen other people were wounded in the strike that hit a market near Al-Falah school in the district of Nihm, northeast of the capital Sanaa, the sources said.

"An air strike by the Saudi aggression hit near the school, about 200 metres (yards) away," a Nihm local official told AFP, requesting not to be named.

"The deputy principal of the school was moving around to call students for attending morning queue but he faced his fate," resident Mohammed Ali told AFP.

A medical source at Kuwait Hospital in Sanaa confirmed the casualty toll, saying two children were among the dead.

A government military official had told AFP earlier that the school was hit by two missiles by mistake, accusing the Shiite Huthi rebels of keeping armoured vehicles nearby.

The rebels' saba.ye news website said eight people had been killed and 15 wounded, adding that the air strike hit the vicinity of the school.

Human rights groups have repeatedly criticised the coalition over the civilian death toll from the bombing campaign it launched in March 2015.

In August, an air strike on a Koranic school in Saada province, a rebel stronghold in the far north, killed 10 children and wounded 28 other people, prompting a UN call for a swift investigation.

But a probe commissioned by the coalition found the closest targets hit by warplanes were 10 kilometres (six miles) away from the school.

Amnesty International and Human Rights Watch have called on Washington, London and Paris to stop their deliveries of bombs and other weapons to Riyadh because of concerns over civilian casualties.

More than 7,000 people have been killed in Yemen since the coalition launched its intervention, many of them civilians killed in its air strikes.

Washington has scaled back its logistics and intelligence support for the coalition's air war because of concerns about its targeting.