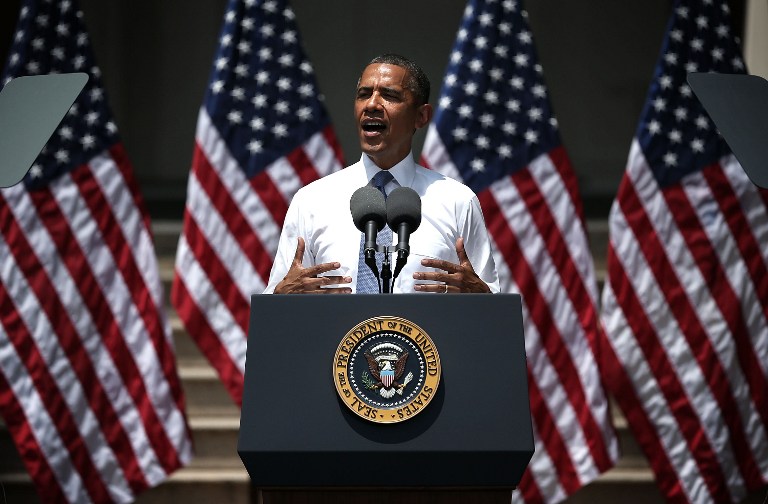 US President Barack Obama speaks as he unveils his plan on climate change June 25, 2013 at Georgetown University in Washington, DC. President Obama laid out his plan to diminish carbon pollution and prepare the country for the impacts of climate change.

Johannesburg - The Congress of South African Trade Unions (Cosatu) says it will disrupt US state president Barack Obama&39;s visit to the country, by staging a march.

Obama is scheduled to arrive in the country on Friday. He is expected to meet President Jacob Zuma on Saturday to talk about trade relations between South Africa and America.

On Tuesday, the trade union told eNCA.com that the federation would march on Friday to the US Embassy to deliver a memorandum of demands.

Cosatu&39;s Gauteng chairperson Phuthas Tseki said the union was disturbed by American foreign policy, in particular the military-heavy strategies that they say Obama failed to address from the previous administration.

“We demand an immediate withdrawal of the US Army in African states. The whole world is full of American troops.”

Tseki says the planned demonstrations are to create awareness and to redirect attention to the injustices caused by the current American government.

He said America is not as democratic as it pretends to be.

“Obama promised decisive intervention in the Israel/Palestine conflict, but he has done little in that regard so far. Guantanamo Bay is still operating today despite assurances that it would be reviewed and shut down.”

President of the National Union of Metal Workers of South Africa, Irvin Jim, said it was wrong to allow Obama to visit the country.

Jim said wherever the US Army was deployed, "...people have been dying like flies."

He said workers were encouraged to join the protests and stand up against the US.

“To let Obama come to our shores and let him walk here as a man of justice and peace is to send a wrong message.”

Meanwhile, Cosatu also planned on holding a second protest at the Lenasia Civic Centre on Friday. Demonstrations were also planned for the University of Johannesburg on Saturday. Obama is expected to receive an honorary degree in law from the university.

On Tuesday at a press conference in Pretoria, International Relations Minister Maite Nkoana-Mashabane told reporters the planned protests were not a major concern for government.

She said the constitution allowed anyone with an opinion to express themselves.