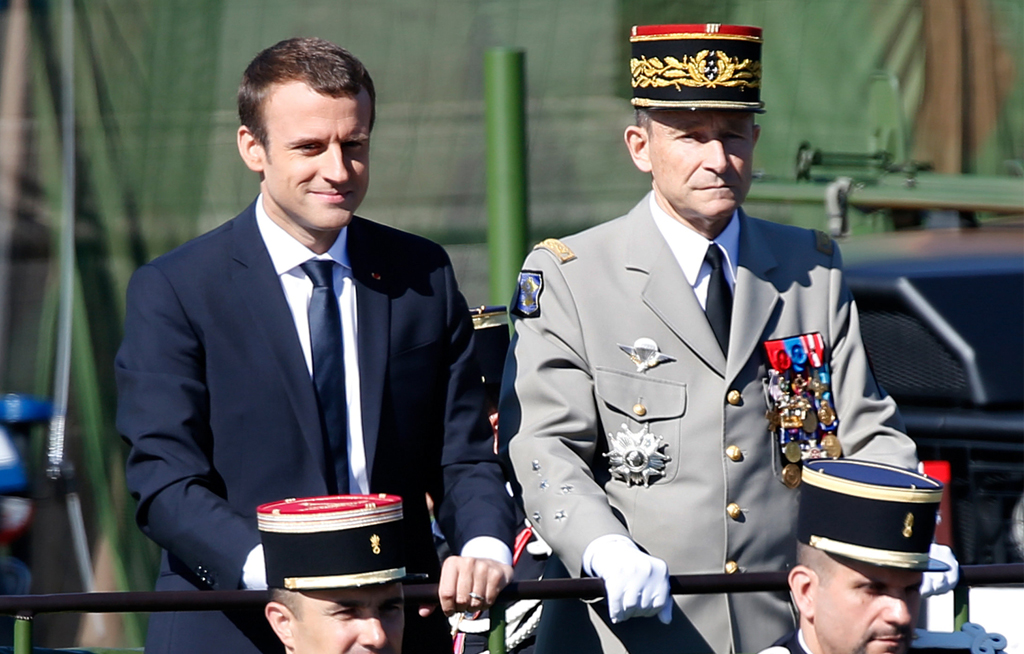 The row between Macron and General Pierre de Villiers erupted last week when the chief of staff told a parliamentary committee he would not allow the armed forces to be "screwed" by the government's plans to slash 850 million euros ($980 million) from this year's defence budget.

Macron, 39, slapped down the 60-year-old five-star general in front of army chiefs at their annual summer party last week, saying "I am the boss" and that he deeply regretted the budget dispute had been dragged into the "public sphere".

De Villiers, a widely respected figure who had been on the job for three years and was popular with the rank and file, said he had no choice but to stand down.

"I no longer feel able to ensure the sustainability of the model of the armed forces that I think is necessary to guarantee the protection of France and the French people," he said in a statement.

On Wednesday, Macron stood by his handling of the disagreement, telling France 2 television that de Villiers was a "fine soldier" it was "not the role" of the chief of staff to question the budget.

The president also reiterated his promise to raise the defence budget again in 2018. "I'm behind our troops," he assured.

He named General Francois Lecointre, a 55-year-old hero of the Balkans wars, as de Villiers's replacement.

Seen as one of the finest officers of his generation, de Villiers's departure triggered howls of indignation from the opposition.

The leader of the hard-left France Unbowed, Jean-Luc Melenchon, called it an "enormous mistake" on Macron's part.

De Villiers's leaked remarks about the budget were made behind closed doors to a committee that expected him to "respond frankly", Melenchon argued.

Damien Abad, a lawmaker from the conservatives Republicans, also took issue with what he termed Macron's "excessive authoritarianism".

De Villiers had repeatedly complained that the military was overstretched and said he saw it as his duty to inform politicians.

In a Facebook "letter to a young recruit" last week, he wrote: "As everyone has their shortcomings, no one should be blindly followed."

Macron's defence cuts -- part of a 4.5-billion-euro reduction in spending aimed at reducing France's budget deficit -- was viewed by the military as a betrayal after his strong show of support for the armed forces during his first weeks in office.

Hours after being inaugurated Macron visited a hospital treating injured soldiers and his maiden foreign trip as a leader took him to Mali to meet French troops engaged in counter-terrorism operations.

Retired general Dominique Trinquand, an adviser to Macron during his campaign, said the row had cast a pall over his otherwise "remarkable" debut.

"This is a hitch that will probably be a bit difficult to get the past," he said in an interview with AFP.

The crisis was exacerbated by its timing, coming in the week of the July 14 Bastille Day military parade, where US President Donald Trump was the guest of honour.

During the parade, Macron rode down the Champs-Elysees avenue in an open-topped military vehicle with a grim-faced de Villiers as Trump looked on.

Macron says the belt-tightening is temporary and that he remains committed to boosting defence spending to 2.0 percent of gross domestic product by 2025 (around 50 billion euros), in line with NATO targets.

Nuclear-armed France and Britain are the biggest military powers in the European Union.

French jets are taking part in strikes against Islamic State jihadists in Syria and Iraq.

Some 4,000 French soldiers are involved in efforts to stop the spread of extremism in West Africa.

And at home, 7,000 soldiers are deployed to patrol the streets after a series of terror attacks that have killed more than 230 people since 2015.