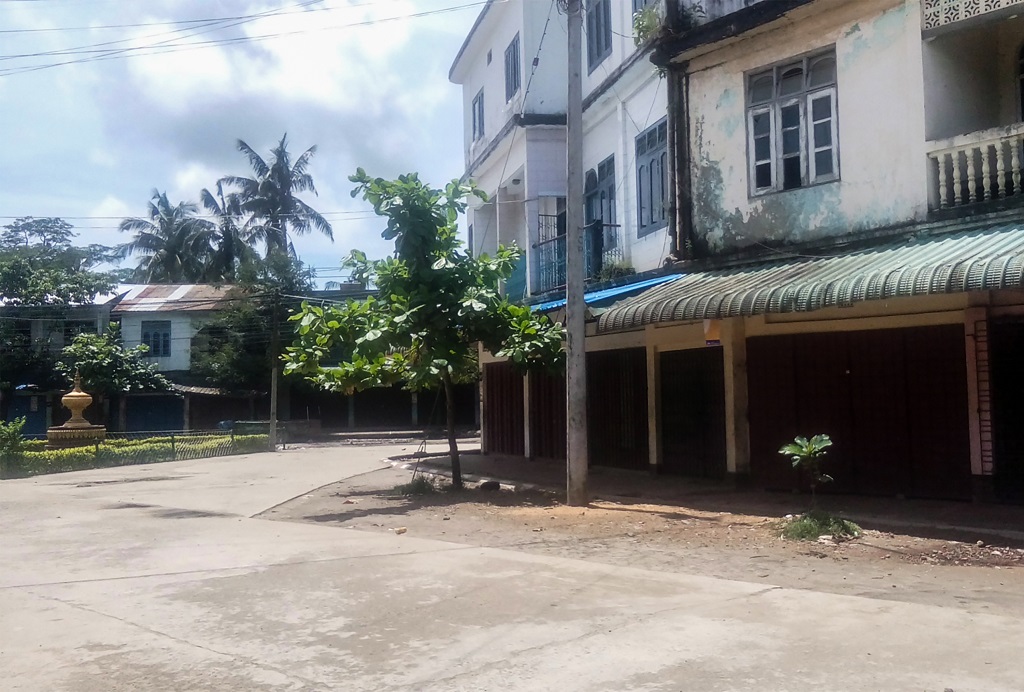 an empty street of Maungdaw township, in Myanmar's northern Rakhine state on August 25, 2017 after residents were told to stay in their homes by authorities after an attack by Bengali extremists.

MAUNGDAW - At least 71 people, including 12 security force members, were killed as Rohingya militants besieged border posts in northern Rakhine State - the worst violence in months to hit the febrile zone.

The state is bisected by religious hatred focused on the stateless Rohingya Muslim minority, who are reviled by many Buddhists and perceived as illegal immigrants.

In recent weeks tensions have surged with near daily killings by shadowy groups operating in remote villages, while Myanmar's army has poured more troops into the area sparking a renewed exodus of refugees.

In the early hours of Friday, more than 20 police posts came under attack by an estimated 150 insurgents, some carrying guns and using homemade explosives, Myanmar's military said.

"Fighting is ongoing at police posts in Kyar Gaung Taung and Nat Chaung villages. The military and police members are fighting back together against extremist Bengali terrorists."

"Bengali terrorists" is the state's description of the Rohingya militants.

One resident in Maungdaw, the main town in northern Rakhine, said gunfire could be heard throughout the night.

"We are still hearing gunshots now, we dare not to go out from our house," the resident said by phone, asking not to be named.

Despite years of persecution, the Rohingya largely eschewed violence.

But a previously unknown militant group emerged as a force last October under the banner of the Arakan Rohingya Salvation Army (ARSA), which claims to be leading an insurgency based in the remote May Yu mountain range bordering Bangladesh.

A Twitter account which frequently posts purportedly from the group - @ARSA_official - on Friday morning confirmed its fighters were engaging Myanmar's military in Rathedaung township.

It accused the military of carrying out atrocities in that area in recent weeks.

But they were pushed back.

"They were scared. We felt pain to send them back," a Border Guard Bangladesh (BGB) officer told AFP.

The flare up came just hours after former UN chief Kofi Annan released a milestone report detailing conditions inside Rakhine and offering ways to heal the festering sectarian tensions there.

Commissioned by Myanmar's own government, it urged the scrapping of restrictions of movement and citizenship imposed on the roughly one million-strong Rohingya community in Rakhine.

In a statement Annan said he was "gravely concerned" by the latest outbreak of fighting.

"The alleged scale and gravity of these attacks mark a worrying escalation of violence," he said.

"After years of insecurity and instability, it should be clear that violence is not the solution to the challenges facing Rakhine State," he added.

The wedge of Rakhine closest to Bangladesh has been in lockdown since October 2016.

Deadly attacks by the militants on border police sparked a military response that left scores dead and forced tens of thousands to flee to Bangladesh.

The UN believes those security 'clearances' may have amounted to ethnic cleansing of the Rohingya, a mainly Muslim minority living in Buddhist Myanmar.

They have so far refused to grant visas to UN investigators tasked with probing the allegations.

Myanmar security forces have conducted sporadic operations to flush out suspected militants throughout this year, often resulting in casualties among Rohingya villagers.

They have spoken of their fear of being trapped in between security forces and the militants, who are accused of conducting a shadowy assassination campaign against perceived collaborators with the state.

Access to the area is severely restricted and verifying information is difficult.