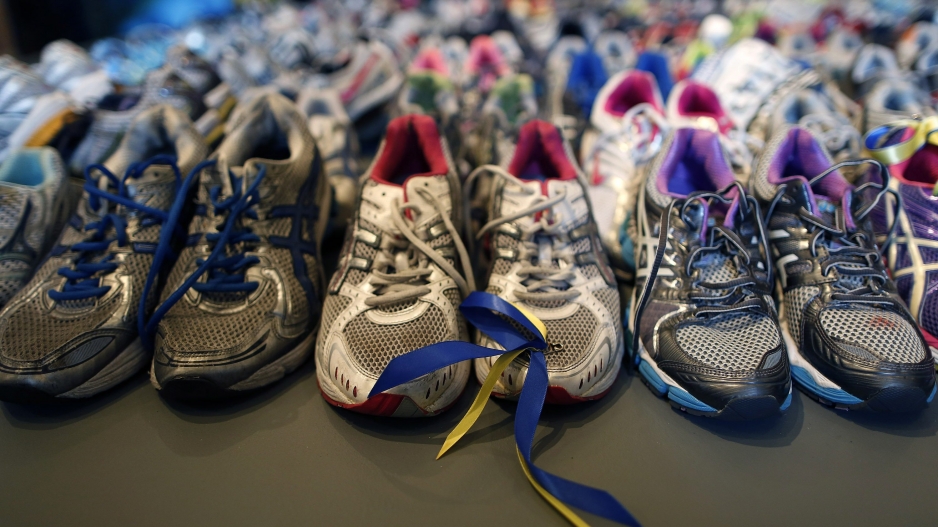 A ribbon is seen on a shoe in a public exhibition of objects and mementos left at the makeshift memorials that emerged in the aftermath of the Boston Marathon Bombings in Boston.

BOSTON - One year after the deadly Boston Marathon bombings, the northeastern US city on Tuesday will pay solemn tribute to the victims of the grisly attack that stunned the nation.

The solemn ceremonies will take place at the scene of the carnage at one of the world&39;s nation&39;s sporting events -- in the heart of the city, on Boylston Street.

Church bells will toll at 2.49pm, the moment the first bomb exploded at the race&39;s finish line on April 15 last year.

The two pressure-cooker devices allegedly planted by two brothers of Chechen descent, who had lived in the United States for years, sent metal fragments flying through the crowd, killing three people and wounding more than 260 others.

Dzhokhar Tsarnaev, who is now 20, and his 26-year-old brother Tamerlan were identified thanks to pictures and video footage and eventually cornered by police after a four-day manhunt that paralysed the city of nearly one million.

Tamerlan died after an exchange of fire with police, and Dzhokhar was wounded and captured.

The younger Tsarnaev, a naturalised US citizen, will go on trial in November and could face the death penalty if convicted.

US Vice President Joe Biden, Massachusetts governor Deval Patrick, Boston mayor Martin Walsh and his predecessor Tom Menino -- who was in office at the time -- will speak at the event at the Hynes Convention Centre, along with survivors.

Tuesday&39;s tribute ceremony "will honour those affected by last year&39;s events, including those who lost lives, survivors, and first responders," organisers said.

There will be a flag-raising ceremony and a moment of silence will be observed at the race&39;s finish line.

To accommodate the additional runners, organisers have added a fourth wave of starters.

Security has been bolstered in the wake of the attacks, with more police on the streets, a "no-bag policy" in place, and glass bottles and large containers of any kind banned from the area.

Spectators will have to go through metal detectors and hundreds of surveillance cameras are in place.

"No bags will be allowed in certain areas at or near the start in Hopkinton, at or near the finish in Boston, or along the course," organisers said, adding that bags would also be banned on buses.

The Tsarnaev brothers allegedly hid the explosive devices in backpacks.

The Massachusetts Emergency Management Agency has put in place a free smartphone alert system to share weather and security information with runners and spectators.

Dzhokhar Tsarnaev has pleaded not guilty to 30 federal charges related to the bombings, including 17 serious charges that can carry sentences of death or life in prison.

Tsarnaev is also charged in connection with the fatal shooting of a campus police officer at the Massachusetts Institute of Technology during the brothers&39; wild getaway attempt.